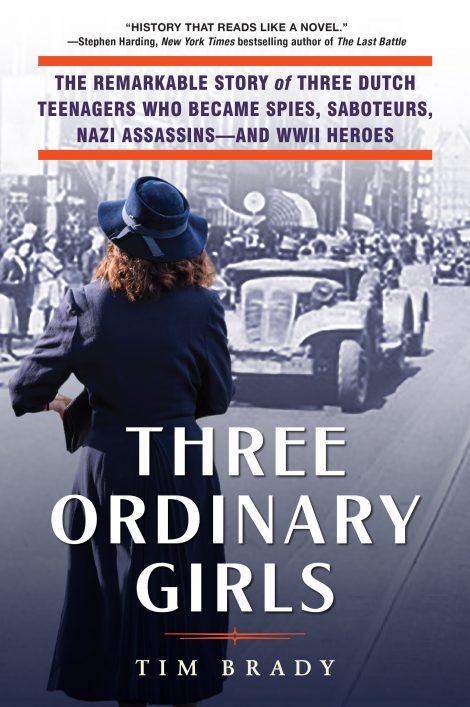 The astonishing true story of three fearless female resisters during WWII whose youth and innocence belied their extraordinary daring in the Nazi-occupied Netherlands.

Truus Oversteegen, her younger sister Freddie, and their friend Hannie Schaft, were just teenagers when the commander of The Dutch Royal Army surrendered to the Nazis. Overnight, nine million Netherlanders were suddenly under the heel of the Nazi boot. As the German-controlled government slowly began to pen in the entire Jewish community and force them indoors, along with the requisite yellow star signifying Jood, so the girls were compelled to become involved in The Resistance.

The astonishing true story of three fearless female resisters during WWII whose youth and innocence belied their extraordinary daring in the Nazi-occupied Netherlands.

Truus Oversteegen, her younger sister Freddie, and their friend Hannie Schaft, were just teenagers when the commander of The Dutch Royal Army surrendered to the Nazis. Overnight, nine million Netherlanders were suddenly under the heel of the Nazi boot. As the German-controlled government slowly began to pen in the entire Jewish community and force them indoors, along with the requisite yellow star signifying Jood, so the girls were compelled to become involved in The Resistance.

As Anne Frank and her family were just going into hiding only miles away in Amsterdam, the girls started with simple acts of covert illegality: lifting German ID cards to counterfeit them; distributing fliers announcing strikes, passing out anti-Nazi literature. With each initiative, the danger became more pronounced, the stakes higher.

Soon they were called on for bigger, deadlier jobs: Ferrying Jewish children to safeguard locations. Stockpiling weapons. Detonating bombs. Intelligence-gathering. Spying. Sabotage. Murder. With each assignment, they became an integral part of the Dutch resistance. But it was not without peril, heartache, suffering, or loss. Award-winning historian Tim Brady paints a vivid portrait of Tuus, Freddie, and Hannie, three ordinary Dutch girls whose selfless acts of courage as they sought to undermine the Nazis and their Dutch collaborators were nothing short of extraordinary. 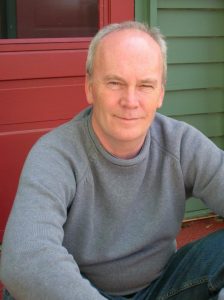 Tim Brady is an award-winning author of nonfiction history books, including Twelve Desperate Miles, A Death in San Pietro, His Father’s Son and Three Ordinary Girls. In addition, he has written and helped develop a number of television documentaries, including the Peabody Award-winning series, Liberty! The American Revolution for PBS. He lives in St. Paul, Minnesota, and is a graduate of the Iowa Writers’ Workshop.

“Historian Brady delivers a dramatic group portrait of three teenage girls who fought in the Dutch resistance movement during WWII. Brady conveys the inhumanity of the period with precision…This moving story spotlights the extraordinary heroism of everyday people during the war and the Holocaust.”—Publishers Weekly

“Brady has explored little-known aspects of World War II, from the life of Ted Roosevelt Jr. to the story of a civilian freighter that aided in a critical Moroccan invasion. Now he turns his attention to the Netherlands, highlighting three young women who worked for the Dutch resistance…Their missions were often based on their ability to infiltrate male spaces by taking advantage of soldiers’ assumptions about femininity: that the girls were naive, stupid, and innocent when they were anything but…This book will please Brady’s fans as well as those who are interested in new and different stories of WWII.”—Booklist

“Three Ordinary Girls is a poignant account of heroic young women who demonstrated idealism, patriotism and courage in the face of constant danger. The book is also a reminder of the hazard of underestimating one’s enemies and the bravery that springs from the most unlikely sources.” – HistoryNet

“Brady paints a compelling picture of the fear, tragedy and paranoia of living in an enemy-occupied land. Heroism and betrayal exist side by side; mistakes are made in the fog of war.  His book succeeds as a tale of how extraordinary circumstances call forth the unexpected strength of ordinary people.” – Minneapolis Star-Tribune

“Brady offers a little-known perspective of the Dutch Resistance by telling the stories of three courageous young women and how their dedication evolved into dangerous, life-threatening missions on behalf of Dutch patriots – regardless of consequences.” – The Pritzker Military Library

“This riveting entry in the nonfiction thriller genre is jam-packed with episodes that showcase the heroism of the girls. From ferrying Jewish Children to safety, to blowing bridges and buildings, to smuggling arms to their fellow resistance fighters, they define heroism in every way, shape and form. Whoever said truth is stranger than fiction might well have had Three Ordinary Girls in mind. This is thriller writing of the highest order, as riveting as it is relentless.“ – Providence Journal

“Exhaustively researched and written with both authority and style, Tim Brady’s Three Ordinary Girls is history that reads like a novel. A vivid and unforgettable portrait of three young women who put their lives on the line in a very personal fight against Naziism, this book is a page-turner and is highly recommended.” —Stephen Harding, New York Times best-selling author of The Last Battle

“James Bond on bicycles, Brady’s Three Ordinary Girls are NOT so Ordinary. These three teenage girls: Truus, her little sister Freddie, and the redheaded Hannie are courage personified and key members of the legendary Dutch resistance. Sometimes reckless, often naïve, always patriotic, our heroines wield guns like cowgirls, while risking their lives to fight the German occupation. And just when you think the Allies have landed and Europe is saved, things take a turn for the worse. Whether they are assassinating Nazis from their bicycles or smuggling Jewish children and satchels of weapons under the nose of the Gestapo, following these three not-so ordinary girls is a nail-biting experience, an exciting book that you won’t be able to put down until the last page.”—Heather Dune Macadam, author of 999: The Extraordinary Young Women of the First Official Jewish Transport to Auschwitz

“An important, untold story from WWII that needed to be told. A brave tale about an incredibly brave sisterhood who fought for all that was good and right and just in the world. The word ‘hero’ tends to be over-used these days, but not here – not with these utterly extraordinary heroines.” —Damien Lewis, #1 International Bestselling author of Churchill’s Hellraisers and Churchill’s Band of Brothers

“Three Ordinary Girls delivers a lean and fast-paced true tale about a group of young women who assassinated Nazis, sabotaged bridges, saved Jewish children, and delivered priceless documents and information in the service of the Dutch resistance during World War II. Tim Brady writes captivatingly of under-recognized heroes and self-sacrifice in a chapter of the war’s history that will now be better known.”—Jack El-Hai, author of The Nazi and the Psychiatrist and The Lost Brothers, and winner of the 2020 Book Award in Biography/History from the American Society of Journalists and Authors

A Q&A with Tim Brady

How did you come upon the story of these three extraordinary girls?

The idea for the book originated with the September 2018 obituary of Freddy Oversteegen in the New York Times. Freddy was the youngest of the three girls in the story—the sister of Truus Oversteegen—and was 93 years old when she passed. It was hard not to get excited when I learned the details of their lives. Freddy, Truus, and a third young woman, Hannie Schaft, had not only worked for the Dutch resistance during World War II, but had actually served as assassins and saboteurs against the Nazis.

I knew, of course, that many women had served in the underground throughout Europe during the war, but how many teenage girls had actually taken up arms in the resistance? I was immediately sucked into questions about who they were, what drove them to the extremes that they pursued, and how they carried out their actions. It was one of those rare stories that became more and more fascinating and remarkable the more I dug into it.

You’re a seasoned author who has written other military histories. What draws you to specific moments in history?

Though I’ve written a number of books that are set during World War II, and I’m drawn to that backdrop for my stories, I’m less interested in the large-scale actions and events of the war, than I am in smaller human tales that describe individual lives within the great scope of this global upheaval. The story of how three young women resisted the evils of Nazism in a country whose trials and tribulations are not as well-known to Americans as others in Europe, had an immediate appeal to me. I like stories that have not been widely told; I like stories that focus on the actions of individuals within the broader context of the war. I’m less interested in larger-than-life characters responding to the extreme stresses and upheaval of war

Some scenes are palm-sweating in their tension.  How did you construct these moments in the book?

When I’m writing narrative histories, I like to focus on individual stories and follow them in a cinematic fashion as they live through the action described. To do this with historical accuracy requires the use of the closely followed perspective of whatever character I’m writing about. I’m always looking for source material—diaries, memoirs, letters, interviews—that allow me to understand and use the voice of my subjects, so that to some extent I can see what they see, think what they think, and act as they act within the context of the narrative. Because almost all of the principals involved in the stories I write are no longer living, I usually must rely on other means than my own interviews to collect these tales. I found wonderful source material for Three Ordinary Girls, particularly the memoirs published by Truus Oversteegen after the war called Not Then, Not Now, Not Ever, as well as a biography of Hannie Schaft by journalist Ton Kors, who was able (in the 1970s) to interview a number of her contemporaries, including some of her fellow resistance fighters and even a couple of members of the Dutch Gestapo who arrested and interrogated her. The Oversteegen sisters both lived into their 90’s and late in life were filmed and interviewed for documentary television. Though both had passed by the time I started researching the book, being able to see them in this fashion, as frail, but still defiant white-haired ladies, gave me an indispensable sense of their character. It was possible to sense their steel and courage in the way they carried themselves.

A Note to Readers from Tim Brady

Thank you so much for your interest in my new book, Three Ordinary Girls: The Remarkable Story of Three Dutch Girls Who Became Spies, Saboteurs, Nazi Assassins—and WW II Heroes. The book was inspired by an obituary I read in The New York Times of Hannie Schaft, who was only a teenager when she began to fearlessly execute daring missions during World War II. Hannie and her friends, the Oversteegen sisters, became active in the Dutch resistance soon after Germany occupied the Netherlands in 1940.

As the circumstances of their lives became more and more oppressed during the course of the occupation, the girls were called upon to take ever more dangerous assignments by their comrades in the resistance. They responded to these demands with remarkable bravery and a savvy instinct for survival. Through the course of the war, they became feared assassins and accomplished saboteurs wanted throughout North Holland by the SS and their Dutch collaborators.

This is a unique story of resistance, little known in the U.S. I hope that I’ve told it with the sort of excitement, verve, and sense of appreciation for the courage of these extraordinary girls that their lives deserve. Again, I want to thank you for your interest in my work. And please hashtag #ThreeOrdinaryGirls if you opt to share your thoughts about the book online.