Mary Cassatt Miller falls for famous photojournalist Ethan Graham. For months at a time, Ethan’s work takes him to Afghanistan, and Cass, who’s passionate about her job in Atlanta, wants a husband who comes home at night. Then, there’s the issue of family―he wants one; she doesn’t.

What they do want is a life together,

Mary Cassatt Miller falls for famous photojournalist Ethan Graham. For months at a time, Ethan’s work takes him to Afghanistan, and Cass, who’s passionate about her job in Atlanta, wants a husband who comes home at night. Then, there’s the issue of family―he wants one; she doesn’t.

What they do want is a life together, so Ethan agrees that after three years, he will stop traveling―whether Cass agrees to children or not. But for Cass, who grew up with a mother who didn’t want her and a father who was never home, even thinking about children troubles her.

Nine weeks before their third anniversary, Cass wonders whether Ethan will try to squeeze in one final trip to Afghanistan. When he does, she’s unsure if he will ever give up the work he loves. And if he won’t, well, she will not repeat the life her parents had. As the clock counts down, it doesn’t help that Singer, the artist-bartender, is always in Atlanta, and the enthralling Setara, the subject of Ethan’s most famous photograph, is also his business partner. Then, a new danger in Afghanistan changes everything. 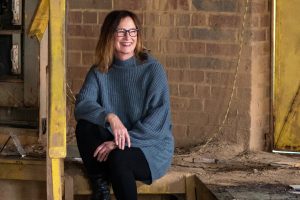 Cynthia Newberry Martin holds an MFA from Vermont College of Fine Arts. She has served as the Review Editor for Contrary Magazine and the Writing Life Editor for Hunger Mountain. Her website features the How We Spend Our Days series, over a decade of essays by writers on their lives. She grew up in Atlanta and now lives in Columbus, Georgia, with her husband, and in Provincetown, Massachusetts, in a little house by the water. Tidal Flats is her first novel.

“Cynthia Newberry Martin is a tremendous writer, with a Woolfian talent for taking the full measure of small moments. Her work is both subtle and revelatory, and I’ve been waiting a long time for this book.”  —Rebecca Makkai, author of The Great Believers and Music for Wartime

“With deep insight and unending sensitivity, Cynthia Newberry Martin shows us to ourselves: our penchant for choosing lives that will crack us open, our resilience when our deepest fears come true. In scenes both vivid and emotionally complex, Tidal Flats excavates the interior of a long-term marriage, how it demands the impossible, offers the unimaginable. This book is a stunning, heart-expanding debut.”  —Pam Houston, author of Deep Creek: Finding Hope In The High Country

“I admire Martin’s capacity to render her characters with the dignity of complexity. And I double-admire that she takes that same care with her settings, turning Place into a player that has its own “human” heart. The novel swirls with light and love.” —Joshua Mohr, author of Sirens and All This Life

“Exquisite! A gorgeously observed account of one woman’s life, lived in our era of global reach, of international obligations, of domestic worries and domestic triumphs too. Cynthia Newberry Martin has found the perfect story through which to share her rare wisdom. Brava!”  —Robin Black, author of Life Drawing

“For once, a novel of big ideas that is also filled with bold and uncommon events. In Tidal Flats, Cynthia Newberry Martin, a storyteller at the top of her game, creates a universe of betrayal, compassion, and regret in which two people’s love for each other is surpassed only by their loyalty to their convictions. I was glued to the page.”  —Jacquelyn Mitchard, author, The Deep End of the Ocean

“Cynthia Newberry Martin’s Tidal Flats is written out of the rough wisdom that knows that love is a peculiar, dynamic force, and all we can do against it is to be alert and open and awake. This is a story of making and unmaking and making again, with no neat resolutions or pat answers. It’s a beautiful book.” —Paul Lisicky, author of Later and The Narrow Door

1. Husbands and wives make agreements—small, unspoken ones and larger ones that can be deal-breakers. What do you think of the agreement that Cass and Ethan made before they got married? Was there another way for them to work out their differences and still stay together? Do you think of marriage vows as an agreement?

2. At the halfway point in the book, what have Cass and Ethan learned about each other and about marriage?

3. The senior living arrangement at Howell is based on that of a family. Do you think it’s a viable alternative to group homes?

4. The Fates acquired the nickname the “Fates” long before Cass arrived at Howell House. How do you think that came about? What do you think Cass meant when she said she took their nickname as a sign?

5. In the novel, we get glimpses of Afghanistan. Discuss the different ways we’re able to see into that country. Did you learn anything surprising?

6. What do you think of Ethan’s project to put cameras in the hands of the Afghans?

7. What are your thoughts about Setara? How do you think being an Afghan and living in Afghanistan affected her personality?

9. Do you think Vee is a good friend? Do you agree with her advice to Cass?

12. A number of books are not only mentioned but are a part of the story. How do they add to the overall experience of reading Tidal Flats?

13. We see many different marriages in the novel. Discuss the ways in which each one works or doesn’t work.

14. Are Cass and Ethan good for each other?

15. What do you think of Ethan’s choices? Do you have confidence in him?

16. In the end, what do you think Cass has decided? What would you have done?

17. The novel was partially inspired by Steve McCurry’s famous photograph “Afghan Girl.” Did that add to the story? Did it cause you to look it up?

18. By the end of the novel, what have Cass and Ethan learned about marriage?

19. Did Tidal Flats change your perception of marriage in any way?

Cynthia Newberry Martin reads from her novel Tidal Flats and is in conversation with Pam Houston.