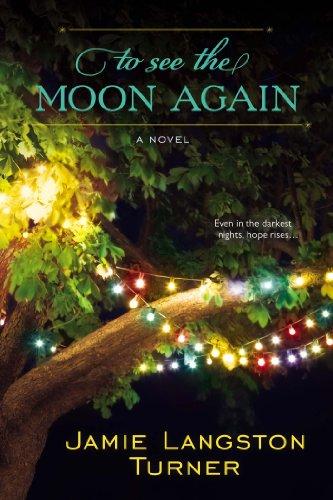 TO SEE THE MOON AGAIN

Every day of her life Julia Rich lives with the memory of a horrible accident she caused long ago. In the years since, she has tried to hide her guilt in the quiet routine of teaching at a small South Carolina college, avoiding close relationships with family and would-be friends. But one day a phone call from Carmen, a niece she has never met, disrupts her carefully controlled world.

Carmen is a study in contrasts—comical yet wise, sunny yet contemplative, soft yet assertive. As she sets about gently drawing Julia from her self-imposed solitude into a place of hope,

Every day of her life Julia Rich lives with the memory of a horrible accident she caused long ago. In the years since, she has tried to hide her guilt in the quiet routine of teaching at a small South Carolina college, avoiding close relationships with family and would-be friends. But one day a phone call from Carmen, a niece she has never met, disrupts her carefully controlled world.

Carmen is a study in contrasts—comical yet wise, sunny yet contemplative, soft yet assertive. As she sets about gently drawing Julia from her self-imposed solitude into a place of hope, she also seeks her own peace for past mistakes.

Together, the two women embark on a journey that takes Julia far from the familiar comfort of home and gives Carmen the courage to open her heart.

Together, their sightseeing trip turns into a discovery of truth, grace, redemption, and, finally, love…

Jamie Langston Turner is the award-winning author of seven novels, including Sometimes a Light Surprises, Winter Birds, and Some Wildflower in My Heart, and has been a teacher for more than forty years. She is currently a professor of poetry and creative writing at Bob Jones University. Jamie lives in Greenville, South Carolina, with her husband.

Praise for the novels of Jamie Langston Turner:

Describe Julia Rich at the beginning of the novel. Is she a likable

woman? Would you like to have her as a teacher, a wife, a

friend, or a sister? Why or why not?

Julia dreads her sabbatical time. If you had a year off, what

would you do? How would you fill your days? Discuss the

Why is Julia so fearful about Carmen’s arrival? What do you

think makes her change her mind and let the girl stay with her?

different? Do you think they are more similar than not? Discuss

their thoughts on children; their attitude toward religion;

their hobbies, habits, and childhoods.

often to reinforce her point, and it is clear she has a strong faith

in God. What is the role of religion in the story, and in the relationship

between Carmen and her aunt?

Julia says, “Many years ago, she had read a description of guilt

that had stuck with her, the gist of it being that guilt is an irresistible

thing humans latch on to and carry around like precious

cargo.” How do the characters in this book carry around their

guilt? What moral compasses do Julia, Carmen, and Luna use

to determine what makes a mistake a crime, or an act of love a

sin? How do they justify or reconcile their guilt in their daily

lives? Do you believe one of them deserves to suffer more than

the others for her actions?

Discuss the importance of the many catastrophic events of

Julia’s life: her traumatic relationship with her father, Jeremiah’s

disappearance, the fight with her mother, the accident, the plagiarism

of Jeremiah’s story, and Matthew’s death. Which one of

those things do you think had the biggest effect on her,

married Matthew? Would she have reconciled with her family?

good and evil.” How is this statement relevant not only to Carmen’s

situation, but also to other situations the characters have

Carmen always manages to see the positive in a situation, and

is confident in God’s plan for her life. After Luna confesses to taking Lizzy as her own grandchild, Carmen reacts by marveling

truth about her child. Were you surprised at Carmen’s reaction?

What would you have done in her situation? Does Carmen’s

interpretation of Luna’s actions as “a deep mercy” seem frustratingly

naive to you, or is it something to be admired?

As an English professor, Julia frequently analyzes situations or

conversations as they relate to creative writing, or the stories and

essays her students might write. Why do you think the author

refers so often to literature and writing technique? Do her references

affect the way you read certain passages in the book?

the ability to forgive oneself—

big theme in this novel. Why is it often easier to forgive others

before forgiving yourself? Do you think Carmen and Julia were

finally able to forgive themselves? How did Julia’s views on forgiveness

change throughout the book, if at all?

Julia believes she “forfeited her right to have children” when she

had the accident, and doesn’t believe she would have been a

good mother. After seeing her develop a relationship with Carmen,

do you agree or disagree with her assessment? Why?

How has Julia changed by the end of the book? How are her

attitudes, relationships, and feelings different than they were

before she met Carmen? In what ways do you think she will be

Julia’s relationship with her husband was not warm and open.

Whose fault was that? What were their reasons for marrying each other? Have you ever known anyone in real life who

learned to appreciate someone only after that person died?

Another theme in the book deals with “letting go.” Do you

more than men? Why or why not? How can parental possessiveness

damage both the child and the parent? Besides

Carmen, what else does Julia let go of?