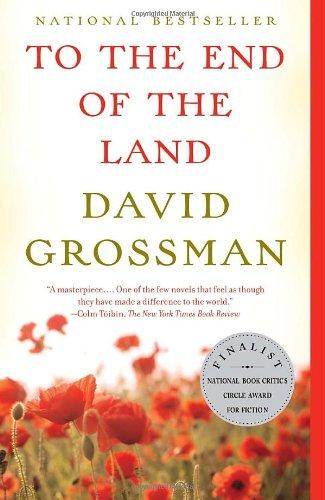 TO THE END OF THE LAND

From one of Israel’s most acclaimed writers comes a novel of extraordinary power about family life—the greatest human drama—and the cost of war.

Ora, a middle-aged Israeli mother, is on the verge of celebrating her son Ofer’s release from army service when he returns to the front for a major offensive. In a fit of preemptive grief and magical thinking, she sets out for a hike in the Galilee, leaving no forwarding information for the “notifiers” who might darken her door with the worst possible news. Recently estranged from her husband, Ilan, she drags along an unlikely companion: their former best friend and her former lover Avram,

From one of Israel’s most acclaimed writers comes a novel of extraordinary power about family life—the greatest human drama—and the cost of war.

Ora, a middle-aged Israeli mother, is on the verge of celebrating her son Ofer’s release from army service when he returns to the front for a major offensive. In a fit of preemptive grief and magical thinking, she sets out for a hike in the Galilee, leaving no forwarding information for the “notifiers” who might darken her door with the worst possible news. Recently estranged from her husband, Ilan, she drags along an unlikely companion: their former best friend and her former lover Avram, once a brilliant artistic spirit. Avram served in the army alongside Ilan when they were young, but their lives were forever changed one weekend when the two jokingly had Ora draw lots to see which of them would get the few days’ leave being offered by their commander—a chance act that sent Avram into Egpyt and the Yom Kippur War, where he was brutally tortured as POW. In the aftermath, a virtual hermit, he refused to keep in touch with the family and has never met the boy. Now, as Ora and Avram sleep out in the hills, ford rivers, and cross valleys, avoiding all news from the front, she gives him the gift of Ofer, word by word; she supplies the whole story of her motherhood, a retelling that keeps Ofer very much alive for Ora and for the reader, and opens Avram to human bonds undreamed of in his broken world. Their walk has a “war and peace” rhythm, as their conversation places the most hideous trials of war next to the joys and anguish of raising children. Never have we seen so clearly the reality and surreality of daily life in Israel, the currents of ambivalence about war within one household, and the burdens that fall on each generation anew.

Grossman’s rich imagining of a family in love and crisis makes for one of the great antiwar novels of our time.

David Grossman was born in Jerusalem. He is the author of numerous works of fiction, nonfiction, and children’s literature. His work has appeared in The New Yorker and has been translated into thirty languages around the world. He is the recipient of many prizes, including the French Chevalier de l’Ordre des Arts et des Lettres, the Buxtehuder Bulle in Germany, Rome’s Premio per la Pace e l’Azione Umitaria, the Premio Ischia— International Award for Journalism, Israel’s Emet Prize, and the Albatross Prize given by the Günter Grass Foundation.

“This is a book of overwhelming power and intensity, David Grossman’s masterpiece. Flaubert created his Emma, Tolstoy made his Anna, and now we have Grossman’s Ora—as fully alive, as fully embodied, as any character in recent fiction. I devoured this long novel in a feverish trance. Wrenching, beautiful, unforgettable.”
—Paul Auster

“Very rarely, a few times in a lifetime, you open a book and when you close it again nothing can ever be the same. Walls have been pulled down, barriers broken, a dimension of feeling, of existence itself, has opened in you that was not there before. To the End of the Land is a book of this magnitude. David Grossman may be the most gifted writer I’ve ever read; gifted not just because of his imagination, his energy, his originality, but because he has access to the unutterable, because he can look inside a person and discover the unique essence of her humanity. For twenty-six years he has been writing novels about what it means to defend this essence, this unique light, against a world designed to extinguish it. To the End of the Land is his most powerful, shattering, and unflinching story of this defense. To read it is to have yourself taken apart, undone, touched at the place of your own essence; it is to be turned back, as if after a long absence, into a human being.” —Nicole Krauss

“A panorama of breathtaking emotional force…. A masterpiece…. One of the few novels that feel as though they have made a difference to the world.”—The New York Times Book Review

What one word would you use to describe the central theme of this novel? Is it a political novel?

In an interview, Grossman said about grief, “The first feeling you have is one of exile. You are being exiled from everything you know.” How do both grief and exile figure into this story?

Throughout the novel is the notion of tapestry, of threads being woven. What does that tapestry signify?

What do you think was Grossman’s intent with the prologue? What did this opening lead you to expect from the rest of the novel? Was it significant to you as a reader, later in the story, to have known these characters as teenagers?

Ora says, “I’m no good at saving people.” Why does she say this? Is it true?

What function does Sami serve in the novel? What do we learn about Ora through her interactions with him?

Why does Ora consider Ofer’s reenlistment to be a betrayal? Why do his whispered, on-camera instructions affect her so strongly?

Discuss Adam’s assertion that Ora is “an unnatural mother.” What do you think he means by that? What does Ora take it to mean?

Ora tells Sami to drive “to where the country ends.” His reply: “For me it ended a long time ago.” What does he mean by that? How does this change your interpretation of the novel’s title?

What is the significance of Ofer’s film, in which there are no physical beings, only their shadows?

In both Adam and Ofer, the influence of nature vs. nurture seems quite fluid. How is each like his biological father, and how does each resemble the man to whom he is not related by blood?

What role does food play in the novel? What does vegetarianism, especially, signify?

Ora says to Avram, “Just remember that sometimes bad news is actually good news that you didn’t understand. Remember that what might have been bad news can turn into good news over time, perhaps the best news you need.” What is she hoping for here? Does her advice turn out to be accurate?

Why does Ora refuse to go back for her notebook? As a reader, could you identify with Ora’s actions? What about elsewhere in the novel?

What do we learn about Ora, Ilan, and Ofer through the story of Adam’s compulsive behavior? What is “the force of no?”

Discuss the significance of whose name Ora draws from the hat. Did she choose that person intentionally? How might the lives of Ora, Ilan, and Avram have been different if the other name were drawn?

When Ora says to Avram, “Maybe you’ll even have a girl,” what is she really saying?

Discuss the final scene of the novel. What does Avram’s vision signify? Was Ora’s motivation for the hike wrong, as she fears?

How did Grossman’s personal note at the end change your experience of the novel? What seems possible for Ora and Avram, and the other characters in the book, at the end of the story?