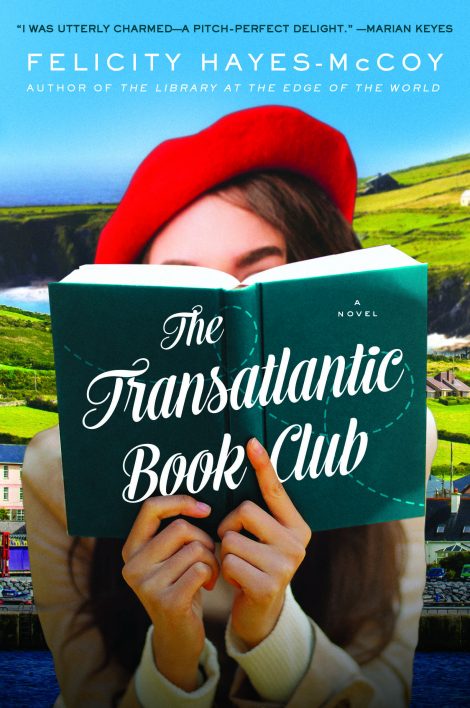 The beloved author of The Library at the Edge of the World returns with an enchanting new novel, perfect for fans of Jenny Colgan, Nina George, and Nancy Thayer.

Distance makes no difference to love…

Eager to cheer up her recently widowed gran, Cassie Fitzgerald, visiting from Canada, persuades Lissbeg Library to set up a Skype book club, linking readers on Ireland’s Finfarran Peninsula with the US town of Resolve, home to generations of Finfarran emigrants.

But when the club decides to read a detective novel, old conflicts on both sides of the ocean are exposed and hidden love affairs come to light.

The beloved author of The Library at the Edge of the World returns with an enchanting new novel, perfect for fans of Jenny Colgan, Nina George, and Nancy Thayer.

Distance makes no difference to love…

Eager to cheer up her recently widowed gran, Cassie Fitzgerald, visiting from Canada, persuades Lissbeg Library to set up a Skype book club, linking readers on Ireland’s Finfarran Peninsula with the US town of Resolve, home to generations of Finfarran emigrants.

But when the club decides to read a detective novel, old conflicts on both sides of the ocean are exposed and hidden love affairs come to light. As secrets emerge, Cassie fears she may have done more harm than good. Will the truths she uncovers about her granny Pat’s marriage affect her own hopes of finding love? Is Pat, who’s still struggling with the death of her husband, about to fall out with her oldest friend, Mary? Or could the book club itself hold the key to a triumphant transatlantic happy ending?

The Transatlantic Book Club continues the stories of the residents of the Finfarran Peninsula and introduces readers to new characters who they will surely fall in love with. 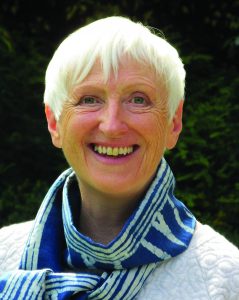 Irish author Felicity Hayes-McCoy built a successful UK-based career as an actress and writer, working in theatre, music theatre, radio, TV, and digital media. She is the author of two memoirs, The House on an Irish Hillside and A Woven Silence: Memory, History & Remembrance, in addition to an illustrated book Enough Is Plenty: The Year on the Dingle Peninsula. She and her husband divide their time between London and Ireland.

“I was utterly charmed—a pitch-perfect delight.” -Marian Keyes, bestselling author of Watermelon and The Break

1. The Transatlantic Book Club centers on a Skype book club that links readers in County Finfarran, Ireland, with friends and family in the little U.S. town of Resolve, which generations of Finfarran’s emigrants now call home. The author says that Resolve, with its community clubhouse, warm neighborly atmosphere and traditions of self-help, could be any small town anywhere. Do you agree? Does your family have links with Ireland, or anywhere else abroad, for which older family members feel affection?

2. Cassie Fitzgerald is young, a bit brash, very loving, and feels great affection for her grandmother. What do you think of the cross-generational relationships in the book? Is there something special about the bond between grandmothers/fathers and their grandkids?

3. What do you think of the mutually dependent love-hate relationship between Pat Fitz and her oldest friend Mary Casey? Do you have friends with whom you went to school who are almost as close as family? Do you think that friends sometimes know each other better than family members can?

4. The old horse trough in the middle of Broad Street is an unchanging feature in a small town that’s rapidly being modernized. What holdovers from the past exist in your community? Do you think there’s value in preserving them?

5. COVID-19 has meant that many community gatherings now take place online. Does your local library or book group host a Skype or Zoom club? If not, would you think of having one? What might be its advantages, or disadvantages, compared to having a live meeting?

6. Cassie loves her fancy-free life as a hairdresser, yet when she comes to Finfarran she has an urge to put down roots. Why do you think this happens? Can you relate to the way she feels about Ireland? Do you have a similar sense of connection with someplace you’ve never lived but you know your ancestors came from?

7. Both Hanna, who deals with library patrons, and Cassie, who works in a salon, have to cope tactfully with the public. Do you have the same challenges in your work? If so, how do you deal with them? (And, if not, have you ever been a difficult customer?!)

8. Though the forest land left by his father was sold off years ago, Fury says it belongs to him “because I take care of it.” What do you think he means by that? Do you think he has a right to say so?

9. Pat, Mary, Tom and Ger grew up in a very different Ireland to the one Cassie has come to. In their day, life could be hard because people were poorer and had fewer choices, and most tensions were swept under the carpet. Can you pinpoint the places when you realized/learned more about the extent to which Ger was bullied as a boy? What do you think of Pat’s reason for marrying him? Do you think that kindness and empathy make a good basis for marriage? Do you think they can be a substitute for love? How might Pat’s life have been different if she’d stayed in Resolve and married Seán?

11. Were you drawn in by the book’s descriptions of Finfarran’s landscape and seascapes? Without them, do you think the story might have affected you differently?

12. What do we learn from Pat about Cassie’s relationship with her mother, Annette, back in Canada? Is there a sense that Cassie’s freewheeling lifestyle is a reaction against her parents’ and siblings’ more conventional values? What do you think of the moment of selfawareness when she realizes that she’s imagined “the looks on her family’s faces when she’d swan home to Toronto with the heir to a cruise line in tow”?

13. Would you find Fury’s idiosyncrasies attractive or annoying if he were working for you? Are there well-respected tradespeople with a similar role to his in your community? Do you empathize with his respect for craftsmanship from the past?

14. “‘With all your schooling did you never learn what ‘glamour’ means?’” Fury tells Cassie that the word comes from folklore and that its original meaning is “’deception … a charm to make something look like something else’”. Do folktales, charms and traditions have a central place in the way the author weaves The Transatlantic Book Club’s story? Did any particular images—for example, The Black Tower or the birds in the nuns’ garden—stay with you after you’d read the book?

15. Though she’s not a great reader, Pat loves Thomas Hardy’s poems. That’s not something she talks about, but it’s enriched her life. Do you have a poet or an author you just happened to find in a schoolbook whose work has stayed with you ever since?

16. “Darina Kelly, a ditzy middle-aged mum, and Mr. Maguire, a retired teacher, were serial joiners. If a club was set up, or a group formed, they were always first in line.” What did you think of these two characters? Hanna is aware that Darina struggles with “the pressures of late motherhood” and that Mr. Maguire is “lost without his classroom”. Can you think of other reasons why people become “serial joiners”? Do you think that joining a club or group is a good way to cope with life’s pressures?

17. Some of the Shamrock Club’s members have an unreal vision of Ireland which people in Finfarran find slightly absurd. Hanna views this differently. “In his time, Denis Brennan had held his community together, and allowed it to build its future by invoking a past that, though largely mythical, upheld the virtues of hard work and mutual self-help. There was much to be admired in that.” Do you think Hanna’s viewpoint is right? Do all immigrant communities sentimentalize their home country? Is that a good or a bad thing?

18. “‘Cassie will make her own choices, the way I wasn’t able to, and she’ll have the courage to take risks, the way I never did. And, no, I’m not going to tell your brothers how badly you’ve behaved. I wouldn’t demean your father’s memory.” The emotional turmoil she’s been through has left Pat feeling stronger. Do you think she says and does the right thing when she confronts Frankie? How much has Mary’s support and friendship helped her to reach this new place?

19. Cassie, who’s open and forthcoming, is inclined to tackle things head-on. Do you see this as a personal characteristic? Might it be generational? Do you think that being forthright is a North American trait? Do you think that Cassie’s experience and her unlikely friendship with Fury have changed her in any way by the end of the book?

20. At the end of the novel, in “The Story Behind The Transatlantic Book Club”, Felicity tells how the book was inspired by a chance meeting with a lady who belongs to a book club in a library in Tipperary that discusses books via Skype with a group that meets in a library in Peoria, Illinois. As a guest of the Skype book club, Felicity went to Tipperary to attend a session. She calls it “A physical instance of books breaking boundaries: of ordinary people from different sides of the world exploring the similarities and contrasts in their shared understanding of a story. It was a heartening and exciting conversation to observe and be part of, and a wonderful example of how the internet can bring communities together.” Do you think that books can, and do, break boundaries? In your opinion, is that important in this day and age?