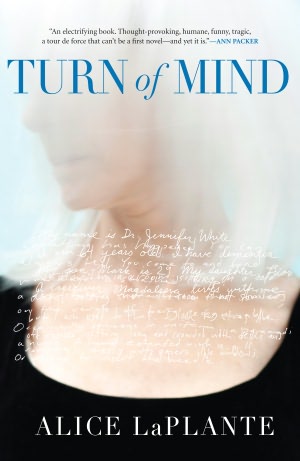 A stunning first novel, both literary and thriller, about a retired orthopedic surgeon with dementia, Turn of Mind has already received worldwide attention. With unmatched patience and a pulsating intensity, Alice LaPlante brings us deep into a brilliant woman’s deteriorating mind, where the impossibility of recognizing reality can be both a blessing and a curse.

As the book opens, Dr. Jennifer White’s best friend, Amanda, who lived down the block, has been killed, and four fingers surgically removed from her hand. Dr. White is the prime suspect and she herself doesn’t know whether she did it.

A stunning first novel, both literary and thriller, about a retired orthopedic surgeon with dementia, Turn of Mind has already received worldwide attention. With unmatched patience and a pulsating intensity, Alice LaPlante brings us deep into a brilliant woman’s deteriorating mind, where the impossibility of recognizing reality can be both a blessing and a curse.

As the book opens, Dr. Jennifer White’s best friend, Amanda, who lived down the block, has been killed, and four fingers surgically removed from her hand. Dr. White is the prime suspect and she herself doesn’t know whether she did it. Told in White’s own voice, fractured and eloquent, a picture emerges of the surprisingly intimate, complex alliance between these life-long friends—two proud, forceful women who were at times each other’s most formidable adversaries. As the investigation into the murder deepens and White’s relationships with her live-in caretaker and two grown children intensify, a chilling question lingers: is White’s shattered memory preventing her from revealing the truth or helping her to hide it?

A startling portrait of a disintegrating mind clinging to bits of reality through anger, frustration, shame, and unspeakable loss, Turn of Mind is a remarkable debut that examines the deception and frailty of memory and how it defines our very existence.

Alice LaPlante is an award-winning writer who teaches at San Francisco State University and Stanford University, where she was awarded a Wallace Stegner Fellowship and held a Jones Lectureship. Raised in Chicago, she now lives with her family in Northern California.

“LaPlante’s literary novel explores uncharted territory, imagining herself into a mind, one slipping, fading, spinning away from her protagonist. . . . LaPlante tells the story poignantly, gracefully, and artistically. Jennifer White, as a physician, as a wife, as a mother, leaps from the pages as a powerful character. . . . A haunting story masterfully told.”
—Kirkus Reviews (starred review)

“Haunting . . . [A] startling portrait of a fiercely intelligent woman struggling mightily to hold on to her sense of self. . . . This masterfully written debut is fascinating on so many levels, from its poignant and inventive depiction of a harrowing illness to its knowing portrayal of the dark complexities of friendship and marriage.”—Joanne Wilkinson, Booklist (starred review)

What is the time span of the novel? Were you clear about the flashbacks in Jennifer’s memory? Even in her surreal perceptions, is she still working out the past in the stories of James, Mark, Fiona, Amanda, and Peter? What about Dr. Tsu? Is the past really the past in Turn of Mind?

Would the story have worked as well if it had been told chronologically? Why, or why not? Consider the overlays of memory of all the characters. Do they provide double or triple exposures? The book is a memoir, a case history, and a mystery. “Something just wasn’t right about this from the beginning, she says, nothing fit.” (p. 278). How does the mystery reflect Jennifer’s condition? Does the ground keep shifting, for the reader, the detective, and, of course, Jennifer? Which characters keep searching for the missing piece of mosaic, lost somewhere in Jennifer? Are there times when we know more than Inspector Luton does? More than Jennifer? Or are we all, characters and readers, held with hints and suspicions until the end?

“This half state. Life in the shadows. As the neurofibrillary tangles proliferate, as the neuritic plaques harden, as synapses cease to fire and my mind rots out, I remain aware. An unanesthesized patient” (p. 8). Jennifer in her notebook describes her life in a fog. The term “coming of age” has a new meaning in Turn of Mind. As people grow up, we expect a loss of innocence. How is the process reversed in Alzheimer’s dementia? When Jennifer is trying to identify faces, she feels less capable than a six-month-old child, trying to “separate the known from the unknown” (p. 145). We think of Shakespeare’s “Ages of Man” when Jennifer compares the unhinged despair of fellow patients to the inconsolable, howling infant Fiona with colic.

After his riding catastrophe, Christopher Reeve lay frozen in his own body. He said to his wife, “I’m still here.” The essential Christopher was in there somewhere like the butterfly in the bell jar. Is that true of Jennifer? Which character do you think is able to see that essence the way Reeve’s wife could?

“What crime have I committed? How long have I been incarcerated?” Think of Kafka’s The Trial or The Castle or The Metamorphosis. (Gregor, as a giant beetle, hangs on to an internal reality, but his condition is surreal. His disconnect with family and friends is undeniable.)  Kafka’s characters are doomed for unknowable causes. Does Jennifer probe at guilt as a way to make sense of her fate?

What draws Jennifer and Amanda together? What locks them in a friendship/competition like a pair of magnets that often get turned around, wrong end to? At one point, Jennifer says, “My best friend. My adversary. An enigma at the best of times. Now gone, leaving me utterly bereft” (p. 53). Asked by police about the relationship, Jennifer says, “Close, but combative. Amanda was in many ways a difficult woman” (p. 41). “You’d have to hold your own or be vanquished” (p. 45). (Does this remind us of Jennifer’s own mother?)

What surprised you about the marriage of Jennifer and James? How well do you think you know James? James, described as a creature of darkness, is known for “keeping his own counsel on things of import” (p. 47). What were these things? Why are they important in unraveling the mysteries of the book?

“Magdalena would like a clean slate, while I am mourning the involuntary wiping of mine” (p. 81). What is Magdalena trying to erase in her past? Is her name suggestive of her role?  “I swear, sometimes I feel like I’m the one going nuts in this house” (p. 55). Is that surprising for one who is expected to be both advocate and jailer for Jennifer?

How does Jennifer refuse to be discounted? Even paranoiac, she has power. (Or is it paranoia when indeed everyone around her is set to restrain her or to humor her—patronize her, as she says.)

What is it about Jennifer that makes her so compelling, appealing, even?  She behaves badly, outrageously, but there is a larger-than-life element in her that we admire. Give examples. Her professional competency is widely praised, but when we meet her, judgment and self-control have been suspended. Terrible odds are against her, but her wit and pluck survive. There is vitality in her whether she rails against her cursed predicament or shrewdly cuts through the cant of caretakers or officials. As a character, is Jennifer someone you just want to spend time with—at a safe distance?

Even if you have not experienced Alzheimer’s at close hand, what is there in LaPlante’s book that speaks to us all? What is the universality of Jennifer White’s dilemma? How is it a metaphor for the human condition?

Did you enjoy the resonance of other works in LaPlante’s book? What authors were you reminded of? Since the perspective is Jennifer’s for the most part, what do the echoes tell us about her turn of mind, her intellectual modus operandi?

Sometimes people’s treatment of Jennifer seems to be a touchstone of their own characters. How did various hospital staff treat her? The taxi driver? People in the Italian bar? The homeless? A woman I once knew patted her Alzheimer’s husband as he was dying and said, “This is not the man I married, but I’ve learned to love this one, too.”  Do Mark and Fiona show signs of this reconciliation with their mother’s condition?

Reconciliations of all kinds seem to evaporate in Turn of Mind. It is not only Jennifer who is mercurial in the family. Talk about Mark and Jennifer, their family past and their adult lives. In the book there is a longing for order and restored harmony, but is this likely in the mayhem of an Alzheimer family? It is a world that tilts unpredictably, an image that recurs repeatedly.

“Do no harm.” What are the ironies of the surgical amputation of Amanda’s fingers? How can one both mutilate and do good?

What is the Russian icon? How does it, as a symbol, work on multiple levels? Describe it. What is its history to Jennifer and James, Amanda, Mark, and Fiona?

Peter, in a prescient moment, says, “It’s those damned cicadas. . . . They make one think about Old Testament–style wrath-of-God type things” (p. 46). What are the dreadful revelations that grow more apocalyptic as they have to repeated, again and again, to Jennifer?

Are there ways in which Jennifer is privileged in her dementia? Think of her visions, her visitations. Once, as she looks into a mirror, she says, “I don’t recognize the face. Gaunt, with too-prominent cheekbones and eyes a little too large, too otherworldly. The pupils dilated. As if used to seeing strange visions. And then, a secret satisfied smile. As if welcoming them” (p. 200). Her fantasy life is a rich one, culminating in a scene like the book of Revelation when she re-enters the hallucinatory world of Amanda’s house, finding comfort in the crowds of old friends and family. “Perhaps this is my revelation? Perhaps this is heaven? To wander among a multitude and have a name for each” (p. 95).

Detective Luton is a linchpin for the story. How is she drawn to Jennifer, not only professionally but also personally? She says that her heart had been broken long ago, and it is being broken again with Jennifer. She sees in Jennifer a woman of quality and tries to reason with her. But Jennifer says, “The words make no sense. She is your sister, your long-lost sister. A shape-shifter. Anything is possible. . . . Who does she remind you of? Someone you can depend on” (pp. 277-278). How does the detective bring both hunches and skill to the case?

Fiona recalls “Amanda at her worst, her supercilious morality on full display” (p. 303). What is the confrontation here between “the iconoclast and the devoted godmother” as Fiona has earlier described her?

“Too many good-byes lie ahead. . . . How many times will I have to say good-bye to you, only to have you reappear like some newly risen Christ. Yes, better to burn the bridge and prevent it from being crossed and recrossed until my heart gives out from sheer exhaustion” (p. 114). Do we learn something new about Amanda here? Does the statement relate to her final acts? How directive is she to the end?

“Some things shouldn’t be scrutinized too closely. Some mysteries are only rendered, not solved” (p. 198). This is Jennifer to Mark about his father, but does it have relevance to the end of Turn of Mind? Are all the mysteries, in fact, explained at the end? Are there things that still puzzle you?