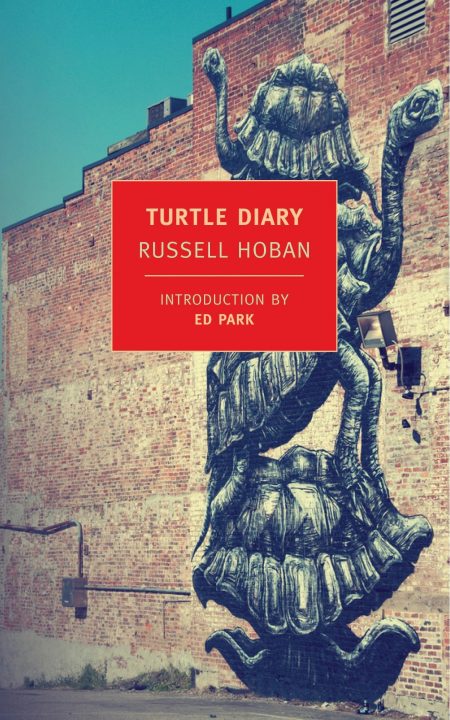 Modern existence can be atomizing, isolating. Certainly it is for William G. and Neaera H., the lonely Londoners at the center of Russell Hoban’s prickly yet heartwarming Turtle Diary. William works at a used-book store and lives in a rooming house after a divorce that has stripped him of his home, family, and career. Neaera is a successful writer of children’s books, who, in her own estimation “looks the sort of spinster who doesn’t keep cats and is not a vegetarian. Looks … like a man’s woman and hasn’t got a man.” By inexplicable coincidence each is irresistibly drawn to the turtle tank at the London Zoo with a mind “full of turtle thoughts,” wondering how the creatures might be freed.

Modern existence can be atomizing, isolating. Certainly it is for William G. and Neaera H., the lonely Londoners at the center of Russell Hoban’s prickly yet heartwarming Turtle Diary. William works at a used-book store and lives in a rooming house after a divorce that has stripped him of his home, family, and career. Neaera is a successful writer of children’s books, who, in her own estimation “looks the sort of spinster who doesn’t keep cats and is not a vegetarian. Looks … like a man’s woman and hasn’t got a man.” By inexplicable coincidence each is irresistibly drawn to the turtle tank at the London Zoo with a mind “full of turtle thoughts,” wondering how the creatures might be freed. Then one day Neaera wanders into William’s bookstore, and together they form an unlikely partnership that will prove a small, and perhaps lasting, triumph of humanity and sympathy.

Russell Hoban (1925–2011) was the author of more than seventy books for children and adults. Hoban worked as a commercial artist and advertising copywriter before embarking on a career as a children’s author while in his early thirties. During the 1960s Hoban and his wife, Lillian, worked at a prodigious rate, producing as many as six books in a single year—many inspired by life with their own children—including six stories about Frances the badger, The Little Brute Family, Emmet Otter’s Jug-Band Christmas, and The Sorely Trying Day (published by The New York Review Children’s Collection). Among Hoban’s novels for adults are Turtle Diary, Riddley Walker, The Bat Tattoo, and My Tango with Barbara Strozzi. He lived in London from 1969 until his death in December 2011.

“A story about the recovery of life…Like other cult writers—Salinger for instance, or Vonnegut–Hoban writes about ordinary people making life-affirming gestures in a world that threatens to dissolve in madness.” —Newsweek

“This wonderful, life-saving fantasy will place Russell Hoban where he has got to be—among the greatest, timeless novelists.” —The Times (UK)

“The marvellous energy of Mr. Hoban’s writing, simultaneously dry and passionate, justifies everything he does.” —Times Educational Supplement

1. Neaera H. talks about the fronts and backs of things: “I had one of those thoughts that sometimes come in dreams and put themselves into words that stay in the mind: the backs of things are always connected to the fronts of them” (78). What do you make of the “front” and “back” of the turtle plan? Compare that to the “front” and “back” of the book, itself. If the “front” of the book is more or less a plot summary, what is the “back”? How does that relate to the ending of the book?

3. What purpose does a diary serve? Is it different for public figures than it is for individuals? How does Turtle Diary align with or differ from your notion of a diary?

4. On a somewhat related note: If Neaera H. and William G.’s “entries” are part of a diary—who is the audience? Are they writing for anyone? Are there places where the audience seems to shift?

5. This text ruminates on the idea of artificial or constructed landscapes (i.e., the turtle tank, water beetle tank, the Port Liberty model, the Polperro miniature—and the town itself in some ways, etc.). How do you see the characters respond to these environments? Does it change over the course of the book?

6. Neaera H. is having trouble starting her next book. She has no shortage of reflections on the natural world—bee mourning (74), the kestrel (41), spiders in space (97), pit ponies (118), etc.—but she doesn’t feel it’s her place to represent any of those creatures. On page 76 she says, “I can’t think now how it could have occurred to me that I might write a story about [Madame Beetle]. Who am I to use the mystery of her that way?” What do you make of this problem of representation? Is it a reduction of the world to a scale model? Does it amplify our understanding of the subject?

7. William G. is attentive to different modes of knowing—early in the book he mocks the zoo wall text that declares the sea turtles to be the “source of turtle soup” (12), he quizzes people on what they’ve read and listened to, he tries to intuit the light signals for the London Tube, he wonders about how the turtles navigate, etc. How does this curiosity play out in his character?

8. How does Hoban use humor?

9. The Romantic hero—identified by literary critic Northrop Frye—is a protagonist who is set apart from society, prone to misanthropy and melancholy, subject to wanderlust and introspection. Romantic heroes do not necessarily possess the virtues that we can see in traditional heroes (bravery, strength, justice, honor, etc.). The primary focus of a work with a Romantic hero is on his or her thoughts, rather than actions. In what ways could you consider William and Neaera to be Romantic heroes? In what ways do they defy that model?

10. We are familiar with the narrative of two loners who have given up on life who meet and fall in love, thereby redeeming themselves. Hoban’s book doesn’t give us that. Do these characters experience redemption? If so, how?

11. There are several examples throughout Turtle Diary of alternative forms of experiencing the world—William G. compares his own fear and anxiety to the situation of shamen (61), he and Harriet visit the scissor grip clairvoyant (section starting on 101), turtle navigation, and, in some ways, Neaera and William’s friendship. How do you reconcile this to the modern environment the characters inhabit? Are these characters ever able to surmount the walls inside themselves?

12. Russell Hoban worked in advertising and was a children’s book author. Does the fact that there are autobiographical similarities to his characters change the way you interpret the book? Does an author’s autobiography matter to you when you read fiction generally?

13. Neaera H. reflects that “the biggest difference between men and women is that more men need to seek out some terrible lurking thing in existence and hurl themselves upon it like Ahab with the White Whale. Women know where it lives but they can let it alone. Even in matriarchal societies I doubt that there were ever female Beowulfs. Women lie with gods and demons but they don’t go looking for monsters to fight with. Ariadne gave Theseus a clew but the Minotaur was his business” (74). How do you think the book treats gender? In some ways, it’s structured on a binary (a man and a woman both reflecting on mostly the same events), but does this kind of division satisfy? Has Neaera got a White Whale, a Minotaur?