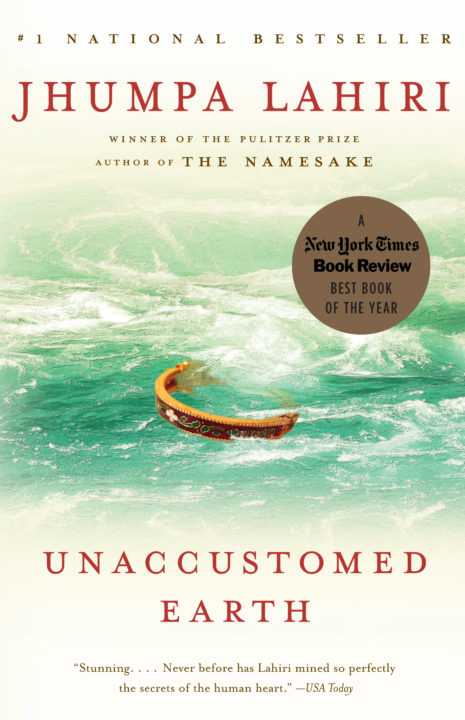 These eight stories by beloved and bestselling author Jhumpa Lahiri take us from Cambridge and Seattle to India and Thailand, as they explore the secrets at the heart of family life. Here they enter the worlds of sisters and brothers, fathers and mothers, daughters and sons, friends and lovers. Rich with the signature gifts that have established Jhumpa Lahiri as one of our most essential writers, Unaccustomed Earth exquisitely renders the most intricate workings of the heart and mind.

These eight stories by beloved and bestselling author Jhumpa Lahiri take us from Cambridge and Seattle to India and Thailand, as they explore the secrets at the heart of family life. Here they enter the worlds of sisters and brothers, fathers and mothers, daughters and sons, friends and lovers. Rich with the signature gifts that have established Jhumpa Lahiri as one of our most essential writers, Unaccustomed Earth exquisitely renders the most intricate workings of the heart and mind.

Jhumpa Lahiri is the author of four works of fiction: Interpreter of Maladies, The Namesake, Unaccustomed Earth, and The Lowland. She has received numerous awards, including the Pulitzer Prize, the PEN/Hemingway Award, the Frank O’Connor International Short Story Award, the Premio Gregor von Rezzori, the DSC Prize for South Asian Literature, a 2014 National Humanities Medal, awarded by President Barack Obama, and the Premio Internazionale Viareggio-Versilia, for In altre parole.

“A testament to Lahiri’s emotional wisdom and consummate artistry as a writer.”—The New York Times

“Lucid and revelatory…. Both universal and deeply felt.” —The Washington Post Book World

1. Discuss the relevance of the epigraph from Hawthorne’s “The Custom-House” not just to the title story but also to the collection as a whole. In which stories do the children successfully “strike their roots into unaccustomed earth”? Why do others find themselves unable to establish roots? How do their feelings of restlessness and insecurity stem from growing up in two cultures? What other more universal problems do they experience? In what ways does their lack of attachment to a place or culture reflect a more general trend in society?

2. In “Unaccustomed Earth,” what underlies the tension in the relationship between Ruma and her father as the story opens? What aspects of the family’s history inhibit their ability to communicate with each other? How do their memories of Ruma’s mother and the life she led influence the paths they choose for the next stages in their lives? Do you feel more sympathy for either character’s point of view?

3. In what ways does “Hell-Heaven” echo the themes explored in “Unaccustomed Earth”? How does the way the story unfolds add to its power and its poignancy? What parallels are there between the narrator’s mother’s “crush” on Pranab and her own infatuation with him and Deborah?

4. What is the significance of the title “A Choice of Accommodations”? What does it imply about Amit and Megan’s marriage? Why do you think Lahiri chose to set the story at Amit’s old prep school? Do you think the events of the weekend bring Amit a better sense of who he is, what he wants and needs from Megan, and his role as a husband and father? Will the weekend change anything for Amit and Megan and their relationship?

5. “Only Goodness” traces the impact of parental expectations on a sister and brother. Why did Sudha and Rahul develop in such different ways? Discuss such factors as the circumstances surrounding their births and earliest years; the obligations Sudha takes on both as the “perfect daughter” and in response to the combination of love, envy, and resentment Rahul’s attitudes and behavior arouse in her; and the siblings’ awareness of and reactions to the “perplexing fact of [their] parents’ marriage” [p. 137]. Compare and contrast the siblings’ choice of partners. What attracts Sudha to Roger, and Rahul to Elena?

6. Why does Paul, the American graduate student in “Nobody’s Business,” find his roommate, Sang, the recipient of frequent marriage proposals, so intriguing? Does Paul really want to help Sang, or does he get involved in her relationship with Farouk for more selfish reasons? Why do you think Lahiri titled this story “Nobody’s Business”—and what does the title mean to you?

7. In “Once in a Lifetime,” Hema addresses Kaushik directly as she recalls the time they spent together as teenagers. How does this twist on the first-person narration change your experience as a reader? Does it establish a greater intimacy between you and the narrator? Does it have an effect on the flow of the narrative? On the way Hema presents her memories? Is it comparable, for example, to reading a private letter or diary? Are the same things true of Kaushik’s narrative in “Year’s End”?

8. In an interview with Bookforum, Lahiri, whose parents immigrated to London and then to the United States, said, “My parents befriended people simply for the fact that they were like them on the surface; they were Bengali, and that made their circle incredibly vast. There is this de facto assumption that they’re going to get along, and often that cultural glue holds them, but there were also these vast differences. My own circle of friends is much more homogenous, because most of my friends went to college—Ivy League or some other fine institution—and vote a certain way.” How is this mirrored by the friendship between the two sets of parents in “Once in a Lifetime,” who are close friends despite the differences in their backgrounds? Why does this attachment deteriorate when the Choudhuri family returns from India? Which of their habits or attitudes do Hema’s parents find particularly reprehensible and why? What is the significance of Kaushik’s breaking his family’s silence and telling Hema about his mother’s illness?

9. How would you describe the tone and style of Kaushik’s account of his father’s remarriage in “Year’s End”? Does his conversation with his father [pp. 253-255] reveal similarities between them? Why does Kaushik say, “I didn’t know which was worse-the idea of my father remarrying for love, or of his actively seeking out a stranger for companionship” [p. 255]? Does the time he spends with his father’s new family offer an alternate, more complex, explanation for his father’s decision?

10. What role do his stepsisters play in Kaushik’s willingness to accept his father’s marriage? Why is he so outraged by their fascination with the pictures of his mother? He later reflects, “in their silence they continued both to protect and to punish me” [p. 293]. In what ways does their silence and the reasons for it mirror Kaushik’s own behavior, both here and in “Once in a Lifetime”?

11. How do “Once in a Lifetime” and “Year’s End” set the stage for “Going Ashore,” the final story in the trilogy? What traces of their younger selves are visible in both Hema and Kaushik? In what ways do the paths they’ve chosen reflect or oppose the journeys their parents made as immigrants?

12. Why does Hema find the idea of an arranged marriage appealing? How has her affair with Julian affected her ideas about romantic love? What does her description of her relationship with Navin [pp. 296-298] reveal about what she thinks she wants and needs in a relationship? What role do her memories of her parents’ marriage play in her vision of married life?

13. What motivates Kaushik’s decision to become a photojournalist? In what ways does the peripatetic life of a photojournalist suit his idea of himself? In addition to the many moves his family made, what other experiences make him grow up to be an outsider, “away from the private detritus of life” [p. 309]?

14. What does the reunion in Rome reveal about the ties that bind Hema and Kaushik despite their many years of separation? What does it illustrate about their attempts to escape from the past and their parents’ way of life? What do they come to realize about themselves and the plans they have made as the intimacy between them escalates? Why does Lahiri introduce Hema’s voice as the narrator of the final pages?

15. In what ways does “Going Ashore” bring together the themes threaded through the earlier stories? What does the ending demonstrate about realities of trying to find a home in the world?

16. The stories in Unaccustomed Earth offer a moving, highly original perspective on the clash between family and cultural traditions and the search for individual identity. How does the sense of displacement felt by the older, immigrant generation affect their American-born children? What accommodations do the children make to their parents’ way of life? In trying to fit in with their American friends, do they sacrifice their connections to their heritage? In what ways are the challenges they face more complex than those of their parents?

17. Several stories feature marriages between an Indian-American and an American-and in once case, English-spouse. What characteristics do these mixed marriages share? In what ways does becoming parents themselves bring up (or renew) questions about cultural identity? What emotions arise as they contemplate the differences between the families they’re creating and those in which they grew up?