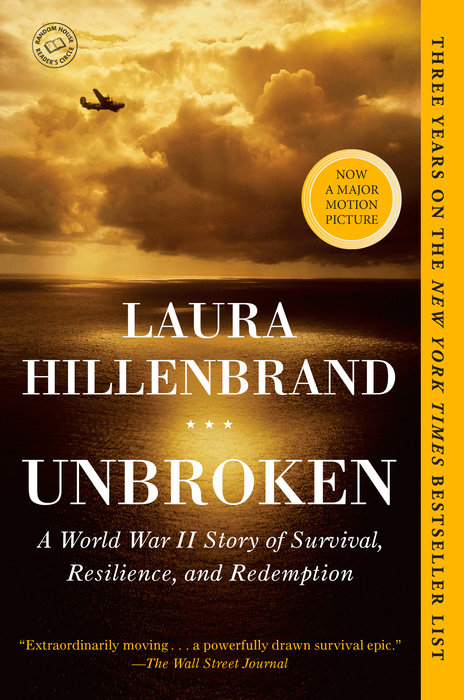 In boyhood, Louis Zamperini was an incorrigible delinquent. As a teenager, he channeled his defiance into running, discovering a prodigious talent that had carried him to the Berlin Olympics. But when World War II began, the athlete became an airman, embarking on a journey that led to a doomed flight on a May afternoon in 1943. When his Army Air Forces bomber crashed into the Pacific Ocean, against all odds, Zamperini survived, adrift on a foundering life raft. Ahead of Zamperini lay thousands of miles of open ocean, leaping sharks, thirst and starvation, enemy aircraft, and, beyond, a trial even greater.

In boyhood, Louis Zamperini was an incorrigible delinquent. As a teenager, he channeled his defiance into running, discovering a prodigious talent that had carried him to the Berlin Olympics. But when World War II began, the athlete became an airman, embarking on a journey that led to a doomed flight on a May afternoon in 1943. When his Army Air Forces bomber crashed into the Pacific Ocean, against all odds, Zamperini survived, adrift on a foundering life raft. Ahead of Zamperini lay thousands of miles of open ocean, leaping sharks, thirst and starvation, enemy aircraft, and, beyond, a trial even greater. Driven to the limits of endurance, Zamperini would answer desperation with ingenuity; suffering with hope, resolve, and humor; brutality with rebellion. His fate, whether triumph or tragedy, would be suspended on the fraying wire of his will.

Appearing in paperback for the first time—with twenty arresting new photos and an extensive Q&A with the author—Unbroken is an unforgettable testament to the resilience of the human mind, body, and spirit, brought vividly to life by Seabiscuit author Laura Hillenbrand. 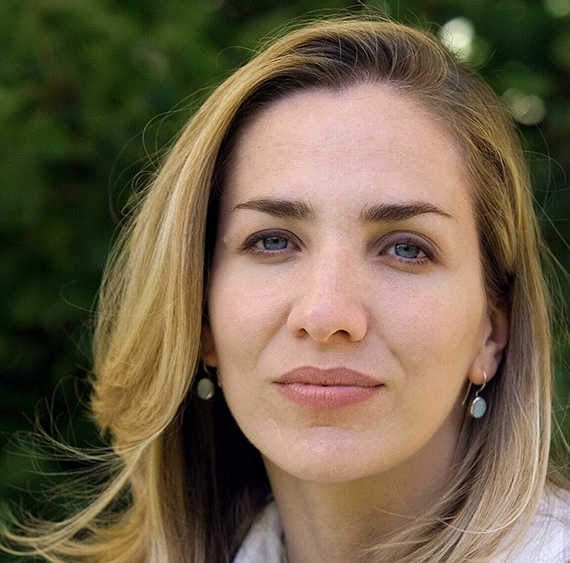 Laura Hillenbrand is the author of the #1 New York Times bestseller Seabiscuit: An American Legend, which was a finalist for the National Book Critics Circle Award, won the Book Sense Nonfiction Book of the Year award and the William Hill Sports Book of the Year award, landed on more than fifteen best-of-the-year lists, and inspired the film Seabiscuit, which was nominated for seven Academy Awards, including Best Picture. Hillenbrand’s New Yorker article, “A Sudden Illness,” won the 2004 National Magazine Award, and she is a two-time winner of the Eclipse Award, the highest journalistic honor in thoroughbred racing. She and actor Gary Sinise are the co-founders of Operation International Children (www.operationinternationalchildren.org), a charity that provides school supplies to children through American troops. She lives in Washington, D.C.

“Moving and, yes, inspirational . . . [Laura] Hillenbrand’s unforgettable book . . . deserve[s] pride of place alongside the best works of literature that chart the complications and the hard-won triumphs of so-called ordinary Americans and their extraordinary time.”—Maureen Corrigan, Fresh Air

“Staggering . . . mesmerizing . . . Hillenbrand’s writing is so ferociously cinematic, the events she describes so incredible, you don’t dare take your eyes off the page.”—People

“Hillenbrand [is] one of our best writers of narrative history. You don’t have to be a sports fan or a war-history buff to devour this book—you just have to love great storytelling.”—Rebecca Skloot, author of The Immortal Life of Henrietta Lacks

1. Louie’s experiences are singular: It’s unlikely that one person will ever again be in a plane crash, strafed by a bomber, attacked by sharks, cast away on a raft, and held as a POW. And yet the word most often used to describe him is “inspiring.” What does Louie’s experience demonstrate that makes him so inspirational to people who will never endure what he did? What are the lessons that his life offers to all of us?

2. Is Louie a hero? How do you define heroism?

3. In Louie’s boyhood, he was severely bullied, then became a delinquent and hell-raiser. In these experiences, did he already display attributes that would help him survive his wartime ordeal? Did he also show weaknesses or tendencies that foreshadowed the struggles he would face postwar?

4. Do you think Louie’s athletic career helped prepare him for what he would face in war?

5. Louie was especially close to his brother, Pete, who devoted himself to him. If Pete hadn’t been there, what do you think would have become of Louie? Does Pete deserve credit for shaping Louie into a man who could endure and survive his Odyssean ordeal?

6. Hillenbrand explores the extraordinary risks faced by America’s World War II airmen: 52,000 men killed in combat, 36,000 killed in noncombat aircraft accidents, and a stunning 15,000 killed in stateside training—at times, an average of 19 per day. Men faced a 50 percent chance of being killed during combat tours of only 30 to 40 missions. Were you aware of the dangers faced by airmen in the Pacific war? What facts and stories were most surprising to you?

7. What are your feelings about Mac? Do you feel sympathy for him? Anger? If you endured the trauma of a plane crash and were placed in a situation that you knew very few men survived, might you have reacted as he did? In the end, do you think he redeemed himself?

8. When Louie, Phil, and Mac were on the raft, a key factor in their survival was optimism. All three men were young and able-bodied, veterans of the same training, experiencing the same hardships and traumas, yet Louie and Phil remained optimistic while Mac was hopeless, seemingly doomed by his pessimism. Why are some people hopeful and others not? How important are attitude and mind-set in determining one’s ability to overcome hardship?

9. What did you find most remarkable about the things Louie and Phil did to survive on the raft?

10. After more than forty-seven days on the raft, the men lost half their body weight and were rendered mere skeletons. Yet they refused to consider cannibalism, which had not been uncommon among castaways before them. Would you, in the same situation, ever consider cannibalism? If it could ensure that two men survived, when otherwise all three would almost certainly perish, would it be a moral decision?

11. Louie believed he was the beneficiary of several miracles, among them his escape from the wreckage of his plane, the fact that he and the other men were not hit with bullets when their rafts were strafed, and the appearance of the singers in the clouds. What is your interpretation of those experiences?

12. The POWs took enormous risks to carry out thefts, sabotage, and other acts of defiance. Men would risk their lives to steal items as trivial as pencil boxes. What benefit did they derive from defiance that was worth risking death, or severe beatings?

13. In the 1930s and 1940s, Germany and Japan carried out what are arguably among the worst acts of mass atrocity in history. What leads individuals, and even whole societies, to descend to such a level? What motivated the notoriously sadistic POW camp guards in Japan, particularly the Bird? Do you think we all carry the capacity for cruelty?

14. After the war, Louie would say that of all the horrors he witnessed and experienced in the war, the death of the little duck, Gaga, was the worst. Why was this event especially wrenching for him and the other POWs?

15. Louie, Frank Tinker, and William Harris planned to escape from Ofuna, walk across Japan, steal a boat, and make a run for China. It was a plan that very likely would have ended in their deaths. Was it foolish, or did it offer a psychological benefit that was worth the enormous risk?

16. Louie joined a plot to kill the Bird. Was he justified in doing so? Would it have been a moral act? Do you think Louie could have found peace after the war had he killed the Bird?

17. Unbroken reveals that, under the “kill-all order,” the Japanese planned to murder all POWs, a plan that was never carried out because of the dropping of the atomic bombs. The book also explores the lengths to which the Japanese were prepared to go to avoid surrender. How did the book make you feel about America’s use of the atomic bomb on Japan?

18. “Anger is a justifiable and understandable reaction to being wronged, and as the soul’s first effort to reassert its worth and power, it may initially be healing,” Laura Hillenbrand wrote in an article for Guideposts magazine. “But in time, anger becomes corrosive. To live in bitterness is to be chained to the person who wounded you, your emotions and actions arising not independently, but in reaction to your abuser. Louie became so obsessed with vengeance that his life was consumed by the quest for it. In bitterness, he was as much a captive as he’d been when barbed wire had surrounded him.” Do you agree?

19. Many of us struggle to forgive those who have wronged us, especially since forgiveness is often so difficult to find. What makes it so hard to let resentment go?

20. “What the Bird took from Louie was his dignity; what he left behind was a pervasive sense of helplessness and worthlessness,” Hillenbrand continued in her Guideposts article. “As I researched Louie’s life, interviewing his fellow POWs and studying their memoirs and diaries, I discovered that this loss of dignity was nearly ubiquitous, leaving the men feeling defenseless and frightened in a world that had become menacing. The postwar nightmares, flashbacks, alcoholism and anxiety that were endemic among them spoke of souls in desperate fear. Watching these men struggle to overcome their trauma, I came to believe that a loss of self-worth is central to the experience of being victimized, and may be what makes its pain particularly devastating.” Do you agree?

21. Hillenbrand wrote that among the former POWs she interviewed, forgiveness became possible once each POW had found a way to restore his sense of dignity. Was this what Billy Graham gave to Louie? If so, what was it about that experience, and that sermon, that gave Louie back his self-worth?

22. Do Louie Zamperini’s wartime and postwar experiences give you a different perspective on a loved one who was, or is, a veteran?

23. Why do you think most World War II literature has focused on the European war, with so little attention paid to the Pacific war?