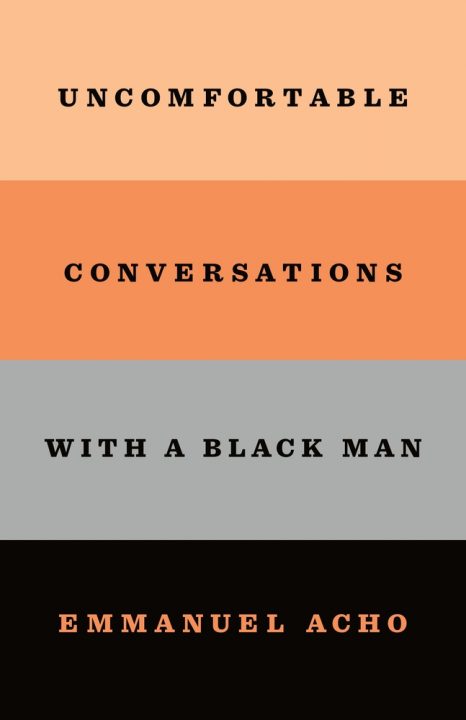 UNCOMFORTABLE CONVERSATIONS WITH A BLACK MAN

An urgent primer on race and racism, from the host of the viral hit video series “Uncomfortable Conversations with a Black Man”.

“You cannot fix a problem you do not know you have.” So begins Emmanuel Acho in his essential guide to the truths Americans need to know to address the systemic racism that has recently electrified protests in all fifty states. “There is a fix,” Acho says. “But in order to access it, we’re going to have to have some uncomfortable conversations.”

In Uncomfortable Conversations With a Black Man,

An urgent primer on race and racism, from the host of the viral hit video series “Uncomfortable Conversations with a Black Man”.

“You cannot fix a problem you do not know you have.” So begins Emmanuel Acho in his essential guide to the truths Americans need to know to address the systemic racism that has recently electrified protests in all fifty states. “There is a fix,” Acho says. “But in order to access it, we’re going to have to have some uncomfortable conversations.”

In Uncomfortable Conversations With a Black Man, Acho takes on all the questions, large and small, insensitive and taboo, many white Americans are afraid to ask—yet which all Americans need the answers to, now more than ever. With the same open-hearted generosity that has made his video series a phenomenon, Acho explains the vital core of such fraught concepts as white privilege, cultural appropriation, and “reverse racism.” In his own words, he provides a space of compassion and understanding in a discussion that can lack both. He asks only for the reader’s curiosity—but along the way, he will galvanize all of us to join the antiracist fight. 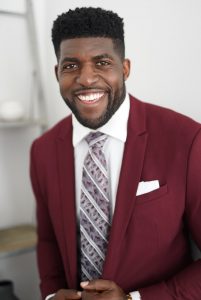 Emmanuel Acho is a Fox Sports Analyst (“Speak for Yourself”) and Host/Producer of “Uncomfortable Conversations with a Black Man,” a web series opening a dialogue about racism. Drafted to the NFL in 2012, Acho played for the Cleveland Browns and later the Philadelphia Eagles until stepping off the field to begin his broadcast career in 2016. In 2019, Forbes listed Acho as a 30 Under 30 honoree, recognizing him for his success as the youngest national football analyst for ESPN. Acho earned his undergraduate and graduate degrees from The University of Texas and his family’s nonprofit organization, Living Hope Christian Ministries, is dedicated to providing adequate medical treatment to the people of Nigeria.

“This book from the former NFL player and current Fox Sports analyst provides a new voice in the dialogue about racism.” —Washington Post

“This incredibly important book tackles all the race-related questions people have but are afraid to ask.” —GMA.com

“What Emmanuel Acho has to say is important.” —Matthew McConaughey

“The author delivers exactly what he promises in the title, tackling difficult topics with the depth of an engaged cultural thinker and the style of an experienced wordsmith. Throughout, Acho is a friendly guide, seeking to sow understanding even if it means risking just a little discord.” —Kirkus Reviews

“An absolute must-read…Emmanuel Acho dives into important subjects like cultural appropriation and white privilege, urging you to find a way to join in the fight against racism.” —Cosmopolitan

1. In the introduction, Acho writes: “Getting uncomfortable is the whole idea. Everything great is birthed through discomfort.” What does he mean by this? Do you think “discomfort” is necessary in an honest conversation about race and racism?

2. Acho writes about doubting whether he was “black enough,” growing up, because he had internalized a stereotypical vision of black masculinity, reinforced by the mostly-white community around him. What was that stereotypical vision of blackness? Did any of it match your own preconceptions, either now or earlier in life? Have you ever felt like you weren’t “____ enough,” in terms of an identity group to which you belong?

Part I: You and Me

3. Why do you think Acho starts the book with the question of “Black or African American”? And was his answer satisfying to you? Why or why not? Have you ever been part of a group in which there were differences of opinion on how to self-identify?

4. Acho notes that a vital way to reduce implicit biases is to “spend time with people in different social, racial, and ethnic groups.” How often do you have meaningful conversations with people of different racial backgrounds than yourself? How might you widen your circles to enrich and diversify your relationships?

5. Another way to reduce the harm of biases, Acho writes, is to “stop celebrating color-blindness.” Why is “color-blindness” a damaging approach to addressing racism, according to him? Have you ever felt or said that you don’t “see race?” If you hear a friend say that in the future, what will you say to them?

6. For many white people, Acho writes, white privilege manifests as “the power of feeling normal,” and as “the benefit of the doubt.” What do these categories mean to you, in your own life and/or in society? What kinds of privilege do you have, racial or otherwise?

9. Chapter Five, “The Mythical Me,” begins with a thought experiment posed by social scientist Laurie Cassidy. Go through the scenario; ask yourself the questions Cassidy poses. Are there any similarities between your reactions to Cassidy’s hypothetical young black men and the “Angry Black Man” stereotype that has been, as we learn, perpetuated since the days of slavery, “Miss Ann,” public lynchings, and Emmett Till? Discuss.

10. The Angry Black Man stereotype is difficult to talk about in part because it comes in two varieties: one, the historical bogeyman of violence and promiscuity (see question #9), and two, the idea of a black man who is perennially angry about racial injustice. This latter definition, while still a stereotype, is also unjustly maligned, Acho argues—because there is plenty to be angry about. What does he mean by this? How can we begin to break down this stereotype, and give black people space to be angry on their own terms?

11. How did it feel seeing the n-word written in full throughout chapter 6? Discuss. Go through the thought exercise on p. 60-61, “Imagine the worst insult you’ve ever received…”

Part II: Us and Them

12. Why do you think Acho titled Chapter Seven “The House Always Wins”? How does this title relate to his definition of systemic racism?

13. Acho chooses to highlight the areas of housing, schooling, and criminal justice in explaining systemic racism, showing how these three social institutions work in a “vicious cycle” of racial disadvantage. What is that vicious cycle? How does discriminatory policy in one area exacerbate its effects in the other two?

14. Addressing white readers, Acho writes, “you’ve likely spent your whole life enjoying the fruits of systemic racism.” What does he mean by this?

15. Why does Acho argue that “reverse racism” doesn’t exist, even as he allows that individual black people can be prejudiced against white people?

16. Acho gives us several examples of “white talk,” including arguments that affirmative action is a racist policy, that if we have Black History Month we should be able to have White History Month, and that “All Lives Matter” is a harmless substitute for “Black Lives Matter.” What do all of these arguments have in common? Can you think of other examples of white talk?

17. In Chapter Nine, “The Fix,” why does Acho start his explanation of modern voter suppression with the Three-Fifths compromise, and the history of voting before the Civil War and during Reconstruction? How does that history inform your understanding of the present state of voting in America?

18. Do you agree that the discrepancy in legal action against Crystal Mason and Russ Casey was unfair and, specifically, grounded in racist policy? How can we prevent cases like this from happening in the future?

19. Acho writes in Chapter Ten, “Thug Life,” that “Calling someone a thug is putting them on a continuum that ends with a superpredator.” What does he mean by this? In what context have you used or heard the word “thug”? Does anything in this chapter make you rethink those usages?

20. Acho argues that “black-on-black crime” is a “myth,” even as he also explains that crime is a persistent problem in many black communities—exacerbated by the “school-to-prison pipeline” born of systemic racism, and with its community impacts made only worse by overpolicing and disproportionate incarceration. Why is “black-on-black crime” a misleading and, ultimately, harmful characterization of the issues?

21. As with his discussion of voter suppression, Acho starts his discussion of the “broken black family” with deep history, taking us back before the end of slavery and then up through Reconstruction and the twentieth century. Why do we need this history to fully understand the current state of black family demographics? How does it inform your understanding of “what role whiteness has played in the breaking,” as Acho puts it?

22. When miscegenation laws outlawing interracial marriage were finally overturned by the Supreme Court decision in Loving v. Virginia (1967), Acho points out that this was after the passage of both the Civil Rights Act and the Voting Rights Act. Why do you think it took so long to overturn miscegenation laws in particular?

23. Have you ever been in an interracial relationship? And/or you have any connection to transracial adoption? If so—does Acho’s advice on p. 151-153 ring true to conversations you’ve had (or wish you did)? If not—think of significant differences between yourself and a loved one, whether in background, fundamental values, etc. Is there anything in Acho’s advice that is analogous to how you’ve navigated those differences?

24. In Chapter Thirteen, “Good Trouble,” Acho defines the terms protest, riot, rebellion, and massacre, prefacing this section with the justification that “as usual, the words we use matter.” What does he mean by this? Why go to such lengths to define words we might think we know already? Did his definitions change how you think about any of these four words, and their relationship to racism in America?

26. At the end of Chapter Thirteen, Acho poses a difficult question: “What’s worth it to create real change?” He writes that this is uncomfortable to discuss because “it involves questions of power and perspective,” and also because “it involves the question of whether the only “right” response is a totally nonviolent one.” What do you think? On the issue of racism or any other cause, what kind(s) of fighting for change is/are worth it?

27. How does Acho define being a true ally, and how does he distinguish this from dubious cousins like “the white savior complex”?

28. Acho writes that a good place to start one’s allyship is with the question, “How are you as a white person holding other white people accountable?” For white readers: how would you answer this? How have you already manifested allyship in your life? Can you think of an instance in which you could have been a better ally? How do you plan to carry your allyship forward?

29. In Chapter Fourteen, “Breaking the Huddle,” Acho writes that “Race was a political creation, an economic creation…which is to say, racism has always been about power. Which is to say, we invented racism.” What does he mean by this? How does it relate to the exchange that begins the chapter, in which Toni Morrison says that “there is no such thing as race,” only racism?

30. Acho chooses to end the text with “Ending racism is not a finish line that we will cross. It’s a road we’ll travel.” What does this mean to you?