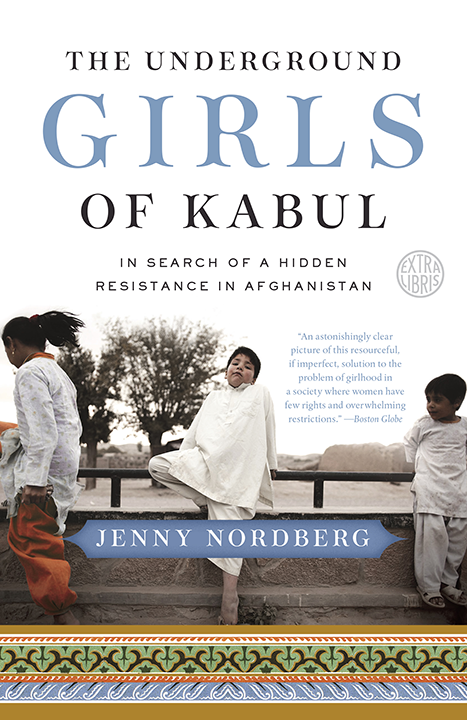 THE UNDERGROUND GIRLS OF KABUL

In Search of a Hidden Resistance in Afghanistan

An investigative journalist uncovers a hidden custom that will transform your understanding of what it means to grow up as a girl.

In Afghanistan, a culture ruled almost entirely by men, the birth of a son is cause for celebration and the arrival of a daughter is often mourned as misfortune. A bacha posh (literally translated from Dari as “dressed up like a boy”) is a third kind of child – a girl temporarily raised as a boy and presented as such to the outside world. Jenny Nordberg, the reporter who broke the story of this phenomenon for the New York Times,

An investigative journalist uncovers a hidden custom that will transform your understanding of what it means to grow up as a girl.

In Afghanistan, a culture ruled almost entirely by men, the birth of a son is cause for celebration and the arrival of a daughter is often mourned as misfortune. A bacha posh (literally translated from Dari as “dressed up like a boy”) is a third kind of child – a girl temporarily raised as a boy and presented as such to the outside world. Jenny Nordberg, the reporter who broke the story of this phenomenon for the New York Times, constructs a powerful and moving account of those secretly living on the other side of a deeply segregated society where women have almost no rights and little freedom.

The Underground Girls of Kabul is anchored by vivid characters who bring this remarkable story to life: Azita, a female parliamentarian who sees no other choice but to turn her fourth daughter Mehran into a boy; Zahra, the tomboy teenager who struggles with puberty and refuses her parents’ attempts to turn her back into a girl; Shukria, now a married mother of three after living for twenty years as a man; and Nader, who prays with Shahed, the undercover female police officer, as they both remain in male disguise as adults.

At the heart of this emotional narrative is a new perspective on the extreme sacrifices of Afghan women and girls against the violent backdrop of America’s longest war. Divided into four parts, the book follows those born as the unwanted sex in Afghanistan, but who live as the socially favored gender through childhood and puberty, only to later be forced into marriage and childbirth. The Underground Girls of Kabul charts their dramatic life cycles, while examining our own history and the parallels to subversive actions of people who live under oppression everywhere.

Jenny Norberg is an award-winning journalist based in New York. A correspondent and columnist for Swedish national newspaper Svenska Dagbladet, she has a long record of investigative reports for, among others, The New York Times, where she also contributed to a series that won the 2005 Pulitzer Prize for National Reporting. In 2010, she was awarded the Robert F. Kennedy Award for Excellence in Journalism for a television documentary on Afghan women. She is a member of the International Consortium of Investigative Journalists (ICIJ).

“Through extensive interviews with former bacha posh, observation of present ones and conversations with doctors and teachers, Nordberg unearths details of a dynamic that one suspects will be news to the armies of aid workers and gender experts in post-invasion Afghanistan.”–New York Times Book Review

“Jenny Nordberg has produced a striking and nuanced work that explores the current status of Afghan women through one of their subcultures…[A] finely written book.”–Washington Post

“Five years of intensive reporting have yielded this gritty, poignant, and provocative collage of intimate portraits…Nordberg conveys captivating nuance and complexity; just when you feel some kind of judgment or conclusive opinion is within reach, she deftly turns the tables, leaving us to reexamine our own prejudices and societal norms as we struggle with questions that are perhaps unanswerable.”–Elle

1. The Underground Girls of Kabul features several women who find ways to resist and subvert power—including Azita, whose status is elevated by disguising her daughter as a son; Mehran, who is able to confidently roughhouse with boys her own age; and Zahra, who fights her parents to maintain her male identity after puberty. Which woman’s story did you find most interesting? Why?

2. Although Afghanistan and its conflicts have been well-covered, the book offers a different entry point into the lives of people there. Before reading this book what (if anything) did you know about Afghanistan? What did you find surprising about the country and its history in reading this book?

3. Do you think the practice of bacha posh is subversive, with the potential to change the strict gender culture of Afghanistan? Or do you see it as women capitulating to and reinforcing a system of segregation?

4. Some of the girls who are raised as bacha posh do not want to go back to living as women. How do you think you would react if you were in their position?

5. After reading the book, does the practice of bacha posh make sense to you or is it entirely foreign? How would you explain why this happens?

6. The author outlines a pervasive culture of violence and extreme segregation. Which part of the story, if any, made you angry? Why?

7. What historical and current-day parallels to bacha posh, pretending to be someone or something else due to segregation or oppression can you think of: real or fictional, in different countries, for different reasons?

8. Are the lives of Afghan women entirely different from those of women in the West, or do you see similarities in how we behave and how we live? What are those?

9. Do you agree that there is also a “culture of honor” in our society, where girls should be pure and boys should be aggressive and protective? Where do you see examples of that in the reporting of daily news or in your own life?

10. Many of the women in this book experience the limits of female freedom, even if they have had success. For example, Azita has risen from a small Afghan village to occupy a place in parliament, but she is still very limited in what she can do and how far she can reach. Is there a limit to how far most women can get in our own society today? Why is that?

12. Jenny Nordberg raises questions about whether or not gender is dichotomous, and she even calls bacha posh “a third kind of child”—neither boy nor girl. What do you think: Are we born a certain way or do we become our gender?

13. Under what circumstances would you consider raising a daughter as a son? And in what situation or circumstance could you imagine disguising yourself in exchange for greater freedom?

14. Did you ever wonder how things would have been different had you been born a child of the other gender?  Did you ever wish, at any stage in your life or in a particular circumstance, that you could be a different gender?

15. For the female reader: Did you ever dress in a less feminine and more traditionally male or conservative way to be taken seriously? Why is that important?

16. For the male reader: What traits that are considered traditionally female have you ever wished you could display more openly, if any? Do you feel a pressure to appear manly in the sense of protecting one’s family; to appear capable; et cetera?

17. In what way were you treated like a boy or a girl, respectively, when you were little? Were there things you absolutely couldn’t do due to your gender? Do you see a future in which gender roles will be less strict, and how is that a good or a bad thing for men and women?

18. Do you agree with the author’s conclusion that women’s rights are essential to human rights and to building peaceful civilizations? Why or why not?