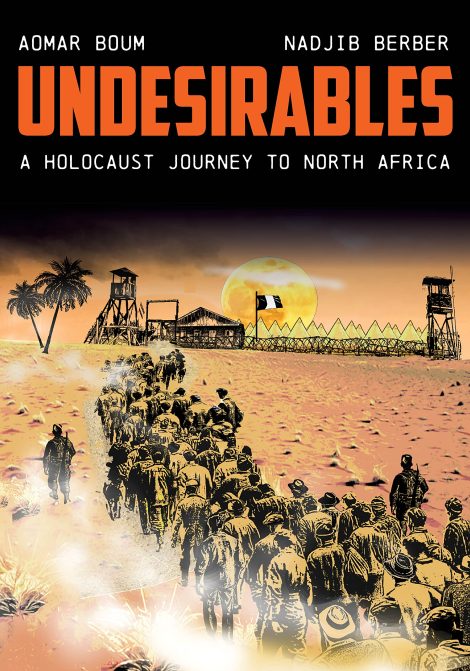 A Holocaust Journey to North Africa

In the lead-up to World War II, the rising tide of fascism and antisemitism in Europe foreshadowed Hitler’s genocidal campaign against Jews. But the horrors of the Holocaust were not limited to the concentration camps of Europe: antisemitic terror spread through Vichy French imperial channels to France’s colonies in North Africa, where in the forced labor camps of Algeria and Morocco, Jews and other “undesirables” faced brutal conditions and struggled to survive in an unforgiving landscape quite unlike Europe. In this richly historical graphic novel, historian Aomar Boum and illustrator Nadjib Berber take us inside this lesser-known side of the traumas wrought by the Holocaust by following one man’s journey as a Holocaust refugee.

Hans Frank is a Jewish journalist covering politics in Berlin, who grows increasingly uneasy as he witnesses the Nazi Party consolidate power and decides to flee Germany. Through connections with a transnational network of activists organizing against fascism and anti-Semitism, Hans ultimately lands in French Algeria, where days after his arrival, the Vichy regime designates all foreign Jews as “undesirables” and calls for their internment. On his way to Morocco, he is detained by Vichy authorities and interned first at Le Vernet, then later transported to different camps in the deserts of Morocco and Algeria. With memories of his former life as a political journalist receding like a dream, Hans spends the next year and a half in forced labor camps, hearing the stories of others whose lives have been upended by violence and war.

Through bold, historically inflected illustrations that convey the tension of the coming war and the grimness of the Vichy camps, Aomar Boum and Nadjib Berber capture the experiences of thousands of refugees through the fictional Hans, chronicling how the traumas of the Holocaust extended far beyond the borders of Europe.

Aomar Boum is Maurice Amado Chair in Sephardic Studies in the Departments of Anthropology, Near Eastern Languages and Cultures, and History at the University of California, Los Angeles.

Nadjib Berber is an American-Algerian comic artist. He worked as a political cartoonist for the Algerian press (African Revolution, El Djoumhouria).

“Comprehensive and cinematic, Boum’s and Berber’s incisive graphic novel illuminates a forgotten and essential story of Holocaust refugees in North Africa.” —David Kushner, author of Easy to Learn, Difficult to Master and Masters of Doom

“Based on extensive archival research, Undesirables powerfully depicts how the experience of Jews and Muslims in both Europe and North Africa was an inseparable part of World War II and the Holocaust.” —Daniel Schroeter, co-editor of Jewish Culture and Society in North Africa

“Undesirables connects the histories of Jews and North Africans, of antisemitism and racism, of the Holocaust and colonialism in the 20th century in innovative and surprising ways. It is an eye-opening book in the literal sense of the word.” —Michael Brenner, American University, Washington DC and University of Munich

“Vivid in word and image, Aomar Boum’s and Nadjib Berber’s rewarding graphic novel introduces readers to a lesser-known chapter from the Holocaust and the relentless stench of antisemitism. Undesirables powerfully portrays the raw horror of the period in its intelligent and expressive historical account.” —Samantha Baskind, Distinguished Professor of Art History, Cleveland State University

1. Why do you think Boum and Berber chose a graphic format to tell this story? Do you agree with their choice? Why or why not?

2. There are several panels throughout the book which include untranslated German. Why do you think Boum chose to leave them untranslated? Did these panels strike you differently from the ones translated into or written solely in English? How so?

3. Towards the beginning of the book, we spend time with our narrator, Hans, and his father, who discuss the beginnings of Hitler’s takeover of Germany. What factors do you believe are most critical to the strikingly disparate opinions Hans and his father have regarding what is happening? Why, despite these differences, do you think both are still in Germany?

4. On page 29, during his visit to Paris in 1933, Sultan Sidi Mohammed Ben Youssef notes that he is “troubled by the strategy of division that European settlers in some cities in Morocco are pushing these days…I am worried about how this is affecting the relationship between my Muslim and Jewish subjects.” Do you believe this strategy is limited to Youssef’s time or location? If so, why? If not, where and how do you see this strategy in use?

5. Despite the fact that they were all interned at the same camp, the work and treatment of different groups of internees at Djelfa was very different—the French, for example, experienced much better conditions than their Spanish counterparts. What purpose did this division serve?

7. Hans’ escape from Djenien-bou-rezg shows that, regardless of how awful or dangerous things became during the war, good people remained willing to do the right thing. Still, with the threat of internment or death hovering over every resistance member, what do you think inspired them to continue to fight? To save others?

8. Why do you think Boum and Berber chose to end the book with the arrival of Americans to Africa instead of following Hans through the end of the war? What, do you think, would even qualify as ‘the end’ for people like Hans?

9. In the book’s afterword, Boum and Berber note that they “chose the form of comics and the graphic novel so that we could facilitate how Muslims and Jews ‘see’ each other.” How well do you think they achieved this aim?

10. Now that you’ve finished Undesirables, is there anything you’d like to learn more about?

11. Why do you think so little has been said about the experiences of Undesirables in North Africa? Does your new understanding of this experience affect the way you think about the atrocities committed during WWII as a whole?

12. What do you think is the true audience for this book? Explain your reasoning.