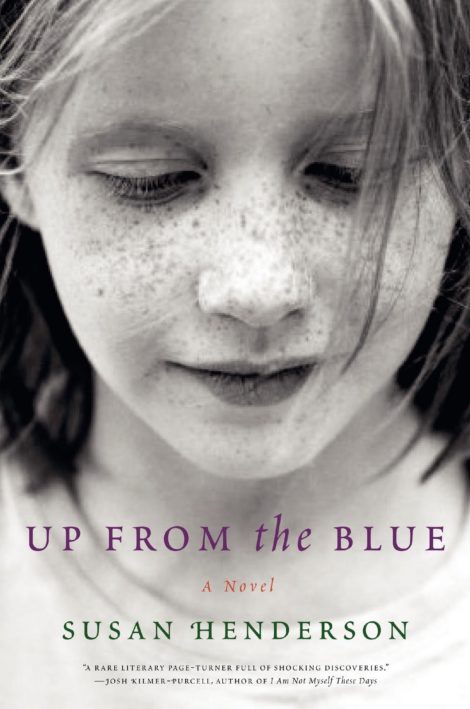 UP FROM THE BLUE

When Tillie Harris goes into labor with her first child, nothing is right. Her husband is away on business, the boxes in her new home aren’t unpacked, and the telephone isn’t even connected yet. Forced to reach out to her estranged father for help, Tillie must face the painful memories she’s been running from since she was a little girl – the memories of her own mother and the year that changed everything.

Tillie’s childhood home was a manic and messy world with her mother, Mara, at its center. Some days brought dancing, dress-up, and laughter,

When Tillie Harris goes into labor with her first child, nothing is right. Her husband is away on business, the boxes in her new home aren’t unpacked, and the telephone isn’t even connected yet. Forced to reach out to her estranged father for help, Tillie must face the painful memories she’s been running from since she was a little girl – the memories of her own mother and the year that changed everything.

Tillie’s childhood home was a manic and messy world with her mother, Mara, at its center. Some days brought dancing, dress-up, and laughter, while other left Mother weeping, drained, and unable to get out of bed. When Tillie’s father takes a top job at the Pentagon and forces the family to move, and as Mara’s worsening depression can no longer be ignored, Tillie’s life spirals out of control.

Arriving at her new home in Washington, D.C., Tillie discovers the unthinkable – her mother has vanished. As her father tries to impose a new, orderly pattern to family life – and refuses to discuss what has happened – Tillie’s fertile imagination attempts to fill in the missing gaps by inventing elaborate narratives and questioning her father’s culpability. But when the veil is lifted and the mystery is revealed, Tillie discovers that the truth behind her mother’s disappearance is far more complicated than she could have imagined.

Susan Henderson is a two-time Pushcart Prize nominee and the founder of the literary blog LitPark: Where Writers Come to Play (www.litpark.com). She is the curator of NPR’s DimeStories, and is the recipient of an Academy of American Poets award. Her work has appeared in Zoetrope, Pittsburgh Quarterly, North Atlantic Review, Opium, Other Voices, Amazon Shorts, The Future Dictionary of America, The Best American Nonrequired Reading, and Not Quite What I Was Planning. Henderson lives in New York. Up from the Blue is her first novel.

“Up from the Blue deftly portrays a family with contradictions we can all relate to—it’s beautiful and maddening, hopeful and condemning, simple, yet like a knot that takes a lifetime to untangle. You will love it completely, even as it hurts you…it’s a heartbreaking, rewarding story that still haunts me.”— Jamie Ford, New York Times bestselling author of Hotel on the Corner of Bitter and Sweet

“A rare literary page-turner full of shocking discoveries and twists. Susan Henderson has created a remarkable narrator—as memorable for her feistiness as for her tenderness. Up From the Blue is going to be one of this year’s major debuts.”—Josh Kilmer-Purcell, author of I Am Not Myself These Days

“Susan Henderson’s debut novel Up From the Blue is elegant and engrossing….Tillie Harris is both tender and tough, charming and filled with wonder by the difficulties she must overcome. Henderson is a talent to watch.”—Danielle Trussoni, author of Angelology and Falling Through the Earth

“Up From the Blue is a heart-wrenching, tender story with a mystery that kept my pulse racing. What a joy to discover Tillie Harris, the most memorable, charming and plucky narrator in fiction since Scout Finch.”—Jessica Anya Blau, author of The Summer of Naked Swim Parties

1. Up From the Blue features a frame story (a story within a story). How do the chapters about grown Tillie enrich the story of 8-year-old Tillie? How would the novel be different if the author had only written about young Tillie?

2. Eight-year-old Tillie is introduced as a biter who liked to leave a mark. What was your initial impression of her? What do you think she craved?

3. Describe the difference between how Phil and Tillie experienced the same events. Which character was more sympathetic to you? And does it surprise you that the same events could impact siblings so differently?

4. Do you think it’s realistic that no one knew what was happening inside the Harris family’s home? Why do you suppose Phil and Tillie didn’t tell a neighbor or a teacher?

5. Throughout the novel, Tillie made references to the neighbors who seemed to live such peaceful lives, but through her contact with the other children, she became aware of divorce, bullying, and racism. In what way is it helpful to see Tillie’s situation in the context of the larger community?

6. What did you learn about Tillie by the people she’s drawn to and how close she allows herself to get to them?

7. When Tillie discovered her mother in the secret room, did you believe what was happening?

8. Why do you think Mara was so alive in the secret room but hardly functioning when she lived with the rest of the family?

9. Were you surprised to learn why Mara disappeared? And were you frustrated with the characters for their actions or inactions?

10. What was the significance of the ruby cup to Tillie, and how did that change near the end of the book?

11. Mara talked about the woman in the golden gown to communicate her dreams and her regrets. Where is the line between self-fulfillment and sacrifice for others?

12. Eight-year-old Tillie’s story ended with the family walk. Did this gain significance when you read the final chapter of the book?

13. How did you find the final scene between grown Tillie and her father? What was your reaction to Tillie’s statement, “I want him to be as powerful a father as he is a scientist”?

14. By the end of the story, Tillie seemed more open to reconnecting with her father, while Phil had gone his own way. What would you have done?

15. In the closing chapter, Tillie wonders what her mother might have become if they’d offered her help? Do you think she could have been helped?

16. What kind of mother do you think Tillie will be? What makes you feel hopeful or pessimistic about her future? Do you think children from unstable upbringings struggle about starting families of their own?