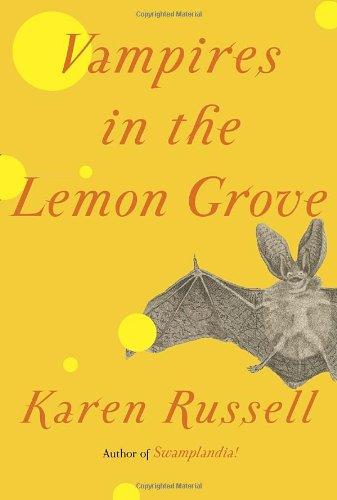 VAMPIRES IN THE LEMON GROVE

The author of the acclaimed short-story collection St. Lucy’s Home for Girls Raised by Wolves and the New York Times best seller and Pulitzer Prize finalist Swamplandia! delivers her best work yet, a virtuosic  new story collection that finds her delving into dark new territory with her trademark exuberance and invention.

A dejected teenager believes that the universe is communicating with him through talismanic objects left behind in a seagull’s nest. Girls held captive in a silk factory slowly transmute into human silkworms, spinning delicate threads from their own bellies and escaping by seizing the means of production for their own revolutionary ends.

The author of the acclaimed short-story collection St. Lucy’s Home for Girls Raised by Wolves and the New York Times best seller and Pulitzer Prize finalist Swamplandia! delivers her best work yet, a virtuosic  new story collection that finds her delving into dark new territory with her trademark exuberance and invention.

A dejected teenager believes that the universe is communicating with him through talismanic objects left behind in a seagull’s nest. Girls held captive in a silk factory slowly transmute into human silkworms, spinning delicate threads from their own bellies and escaping by seizing the means of production for their own revolutionary ends. A massage therapist discovers she has the power to heal by manipulating the tattoos on a war veteran’s torso. And in the collection’s marvelous title story, two vampires in a sun-drenched lemon grove try helplessly to slake their thirst for blood.

Karen Russell, a native of Miami, has been featured in The New Yorker’s debut fiction issue and on The New Yorker’s 20 Under 40 list, and was chosen as one of Granta’s Best Young American Novelists. In 2009, she received the 5 Under 35 award from the National Book Foundation. Three of her short stories have been selected for the Best American Short Stories volumes. She is currently writer-in-residence at Bard College.

“Russell doesn’t work small. She’s a world builder, and the stranger the better…Russell’s great gift—along with her antic imagination—is her ability to create whole landscapes and lifetimes of strangeness within the confines of a short story.”—Publishers Weekly (starred review)

“Russell returns to the story form with renewed daring, leading us again into uncharted terrain, though as fantastic as the predicaments she imagines are, the emotions couldn’t be truer to life…Mind-blowing, mythic, macabre, hilarious.”—Booklist (starred review)

Discuss the relationship between Clyde and Magreb, the two vampires in the title story whose hundred-year marriage is tested when one of them develops a fear of flying. Do you think the author believes they have a good marriage? What is the impact of Clyde’s inability to transmute? Consider this quote from the beginning of the story: “I once pictured time as a black magnifying glass and myself as a microscopic flightless insect trapped in that circle of night. But then Magreb came along, and eternity ceased to frighten me.” What is the author saying here about mortal—and immortal—love?

How might “Vampires in the Lemon Grove” be read as a parable of appetite and addiction? Note the linguistic forms in which the author couches references to the vampires’ need for blood.

“I blinked down at a little blond child and then saw that my two hands were shaking violently, soundlessly, like old friends wishing not to burden me with their troubles. I dropped the candies into the children’s bags, thinking: You small mortals don’t realize the power of your stories” (p. 13). What is the author saying here about the nature of truth, the power of myth, and the role of storytelling in shaping identity?

In “Reeling for the Empire,” Tooka asks, “Are we monsters now?” (p. 31) In the title story, Clyde reflects, “Magreb was the first and only other vampire I’d ever met. We bared our fangs over a tombstone and recognized each other. There is a loneliness that must be particular to monsters, I think, the feeling that each is the only child of a species. And now that loneliness was over.” (p. 9) How are Clyde and Magreb similar to the reelers? What do these two stories have in common thematically? What do you think the author might be trying to say here about exile and community, shape-shifting and transformation?

Look at the passage in “Reeling for the Empire” where Kitsune describes the phenomenon of the thread: “Here is the final miracle, I say: our silk comes out of us in colors. There is no longer any need to dye it. There is no other silk like it on the world market, boasts the Agent.…Nobody has ever guessed her own color correctly—Hoshi predicted hers would be peach and it was blue; Nishi thought pink, got hazel. I would bet my entire five-yen advance that mine would be light gray, like my cat’s fur. But then I woke and pushed the swollen webbing of my thumb and a sprig of green came out. On my day zero, in the middle of my terror, I was surprised into a laugh: here was a translucent green I swore I’d never seen before anywhere in nature, and yet I knew it as my own on sight” (pp. 31–32). How do you account for the joyfulness of this discovery? What do you think the author is trying to communicate about the nature of identity, and of our essential selves?

Discuss Kitsune’s transformation [PE1] on p. 39. What does it mean that her thread changes from green to black?

“Reeling” ends with a violent, dramatic twist. What happens? How did this make you feel? Is this a happy ending or a sad one?

What do the seagulls represent to Nal in “The Seagull Army descends on Strong Beach, 1979,” and how does their symbolism change throughout the story? Initially Nal takes them for his conscience—later, for omens. Discuss Nal’s nightmare, and how the seagulls relate to Nal’s understanding of the past, present, and future. Why does he consider the seagulls “cosmic scavengers” (p. 75), and what do you think that means?

Many of the stories in Russell’s collection pivot on fantasies: Beverly’s fantasy of magically healing Sgt. Derek Zeiger in “The New Veterans”; Dougbert’s faith in Team Krill in “Dougbert Shackleton’s Rules for Antarctic Tailgating,” and a commitment to rooting for the underdog that destroys his marriage and causes him to run the risk of botulism, cannibalism, and frostbite; the Zegner family’s dream of proving up on their claim and becoming homesteaders even if it kills them; the dead presidents’ fantasies of running for reelection and their inability to relinquish their dreams of power despite being reincarnated as horses in “The Barn at the End of Our Term.” In what way might these fantasies be considered uniquely American?

A number of the stories in this collection orbit the themes of regret and atonement, and how to deal with wrongdoing and events that evoke anguish and guilt: Kitsune, Larry Rubio, and Sgt. Derek Zeiger are all grappling, to varying degrees, with issues of culpability. In all of these cases, memory plays a vital role in the rituals of atonement. Discuss.

In “The Graveless Doll of Eric Mutis,” a group of boys stumble on a mutilated scarecrow bearing an uncanny resemblance to the missing classmate they used to torment. There are powerfully sinister undertones here, and it could certainly be read as Karen Russell’s first horror story. But there are also themes of expiation and redemption in “Eric Mutis.” In what ways can it be read as a hopeful story?

Many of the stories in Vampires in the Lemon Grove are intensely comic, with absurd and magical predicaments—vampires in love; post-presidential horses; talismanic objects; miraculous tattoos that can transform the past; girls that turn into silkworms. Yet as readers we can see ourselves in each of these stories. No matter how outlandish the situation, the emotionand the vulnerability that Russell captures is recognizably our own. Which stories moved you most, or spoke to you most powerfully? Why?