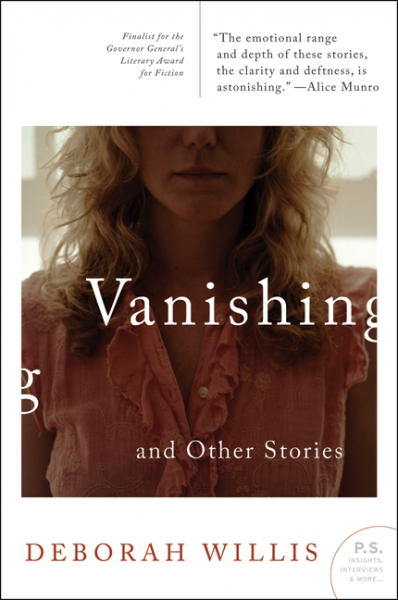 VANISHING AND OTHER STORIES

A French teacher who collects fiancés; a fortune-teller who fails to predict the heartbreak of her own daughter; an aging cowboy seduced by a city girl . . . these are some of the unforgettable people who live in these pages.

In Vanishing and Other Stories, secrets are both kept and unearthed, and lives are shaped by missing lovers, parents, and children. With wisdom and dexterity, moments of dark humor, and a remark- able economy of words, Deborah Willis captures an incredible array of characters that linger in the imagination and prove that nothing is ever truly forgotten.

A French teacher who collects fiancés; a fortune-teller who fails to predict the heartbreak of her own daughter; an aging cowboy seduced by a city girl . . . these are some of the unforgettable people who live in these pages.

In Vanishing and Other Stories, secrets are both kept and unearthed, and lives are shaped by missing lovers, parents, and children. With wisdom and dexterity, moments of dark humor, and a remark- able economy of words, Deborah Willis captures an incredible array of characters that linger in the imagination and prove that nothing is ever truly forgotten.

Deborah Willis’s work has appeared in the Bridport Prize Anthology, Event, and Grain, and she was a winner of PRISM International’s annual fiction prize. Short-listed for the Governor General’s Literary Award for Fiction and long-listed for the Frank O’Connor International Short Story Award, Vanishing and Other Stories is her first book of fiction.

“The stories in VANISHING show the magic of fiction at its best: fully realized worlds inseparable from the uncanny fact that they exist as mere words, magnificently strung together. Willis’s creative sleight-of-hand illuminates human intricacies as if tapping directly into your own.”—Globe and Mail, One of Jim Bartley’s Top Five Books of the Year

“Flecked with welcome humour. . . . Equally salty-sweet. . . . Her attentiveness to detail and her succession of insights about the small moments people share and the consequences of individual choices keep us turning pages, enthralled.”—Vancouver Sun

“A remarkably accomplished collection. . . . Economical, artful description. With her stories, Willis boldly inhabits the skin of all sorts, of all genders. . . . Her talent and skill are nothing short of formidable. . . . Accomplished, edgy, dark stories.”—Times Colonist

“A remarkable new writer, Willis delivers 14 lovely tales and countless vivid moments in her first fiction collection….Readers will feel the joy of discovery in reading an emerging writer whose work will crowd our bookshelves for years to come.”—Booklist

In the title story, “Vanishing,” and in several of the other stories, the narrative jumps around in time, sometimes casting back to the past and sometimes moving forward into the future. What is the purpose of these leaps in time? What is the author trying to convey about the nature of memory, obsession, and a person’s trajectory through life?

In “The Weather,” Rae tells Braden, “My parents talk a lot about right and wrong. But I don’t believe in that” (p.33). What does she mean by this? Is she talking about morality itself or about an externally imposed ethics? Is there a difference?

In “Escape,” the narrator­­––speaking of the main character, Tom––states: “To let go, to disappear, to forget himself. To exist in another’s skin, and then…to return to himself, with another’s knowledge. To escape. It was the only way to live” (p.51). What does ‘escape’ mean in this story? Why does this kind of escape make Tom feel “as generous, as religious, as he’s ever felt” (p.51)?

Why does Mimi, the narrator of “Traces,” address herself to the unknown mistress, instead of to her husband? What does she mean when she says, “…you can only be defined in relation to “the woman.” Without me, you disappear” (p.65)?

Why does Mimi want to paint a portrait of the other woman? And what does she mean when she says: “I…made him tell me everything: how she wore her hair, what she smelled like, the angle of her cheekbones, the shape of her chin and nose. It was how I forgave him” (p.65)?

“Caught” begins and ends with “a pause, one second when they are still” (p.200). It is told in a series of ‘maybes,’ never fully settling on what happens to the characters after that initial ‘caught’ moment. What do you think happens to the wife, the husband, and the boy?

“Sky Theatre” is a re-imagination of the story of Adam and Eve, one of the world’s most influential stories of loss. What is the author implying about religious and mythical stories when she writes, “…she looked as betrayed as Christ. As heartbroken as Him too. She was Demeter, aged by her lost. She was Eve, cast out and cold. Or she was just an ordinary girl” (p.219). What do the final lines of the story tell us about the narrator? About the state of being ‘fallen?’ About the nature of loss?

The stories, “And the Living is Easy,” “Romance Languages,” and “The Separation” are all told from the point of view of children or adolescents. These children observe their parents closely while also trying to separate themselves from them. Do they seem to admire their parents? Do they wish to escape them? Remain close to them? Both at once? And is separation possible? Is it desirable?

In the story, “And the Living is Easy,” the father tells his life story in the mornings on the way to work. In “Remember, Relive,” Cassy’s first sexual experience becomes a secret she has to confess and a story she has to tell. In “Rely,” George tells Christopher bedtime stories. In “The Weather,” Braden tells Rae the story of the tornado. Why do these characters tell each other stories? What is the author saying about the way stories shape our thoughts and selves?