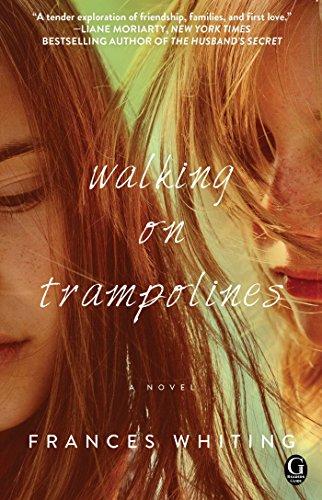 Walking on Trampolines is a story about the thrill of first loves, the crushing pain of betrayal, and how to put the pieces back together after heartbreak.

In the small town of Juniper Bay, Tallulah “Lulu” de Longland and Annabelle Andrews are inseparable. Together they bond over their off-kilter mothers, titter about prudish Sister Scholastica, and spend hours devising an endless compendium of their very own language. When Tallulah meets the irresistible Joshua Keaton, a love triangle begins that will shape the rest of their lives, inextricably linking these three friends together even as their paths diverge and the years fly by.

Walking on Trampolines is a story about the thrill of first loves, the crushing pain of betrayal, and how to put the pieces back together after heartbreak.

In the small town of Juniper Bay, Tallulah “Lulu” de Longland and Annabelle Andrews are inseparable. Together they bond over their off-kilter mothers, titter about prudish Sister Scholastica, and spend hours devising an endless compendium of their very own language. When Tallulah meets the irresistible Joshua Keaton, a love triangle begins that will shape the rest of their lives, inextricably linking these three friends together even as their paths diverge and the years fly by. No matter how long the absence, no matter the distance, Lulu’s first loves are bound to her forever.

Frances Whiting is one of Australia’s best known and most popular writers. A senior feature writer for Queensland’s premier weekend magazine, Q Weekend in the Courier Mail, Frances is also a much loved columnist for the Sunday Mail, and other Sunday newspapers around Australia, with her weekly column now in its nineteenth year. Two bestselling collections of her columns have been published in Australia: Oh to Be a Marching Girl (2003), and That’s a Home Run, Tiger! (2006). Frances lives in Brisbane, Queensland with her husband and two children.

“A warm and engaging novel that explores friendship, first love, betrayal and the healing power of tea cake.” —Sunday Times

“A witty book that touches on some serious issues…plenty of humour…characters you grow to care about. A coming-of age-story with a difference.” —Canberra Times

At the beginning of their friendship, Lulu and Annabelle tell each other everything. However, once Lulu falls for Josh, she begins to play her cards closer to her chest, admitting, “I could have told her that he tasted like almonds and smelt like lemons and that the softest place on his skin was everywhere. I didn’t tell her those things, but in the end, it didn’t matter—she found it all out herself” (pg. 38). Why do you think she begins to conceal her true feelings about Josh to her best friend?

Walking on Trampolines is populated with characters who play with words, using them to create special bonds or leave multitudes unspoken. Consider Annabelle and Lulu’s mish-mash neologisms, such as “glamorgeous” and “disapanish.” How do these function in their relationship? Also consider the names for Rose’s dresses. What does it mean when Harry remarks she’s wearing “Doris,” or when Lulu is relieved she’s wearing “Betty”? How do these names fill in for tacit feelings and underlying understandings in this family?

As their time at school draws to an end, Lulu notes, “Annabelle had grown a different skin, shedding who she used to be when I wasn’t looking. A new, brittle layer masked her softness. I saw less and less of her as the year wound down; we didn’t always walk home together, and when we did she would walk slightly ahead of me, and I could never quite catch up” (pg. 84). What marks this change in Annabelle? Might it precede her fling with Josh, or develop because of it?

On page 90, Annabelle and Lulu argue about Annie’s affair: “And if people are too stupid, or don’t care enough, to see what’s going on right in front of them, Tallulah, then they get what they deserve.” Though Annabelle is speaking of her parents’ relationship, this statement causes Lulu to immediately realize what Annabelle and Josh have been doing behind her back. Why does Lulu finally reach this conclusion in this moment? Do you think the circumstances lend any sympathy to Annabelle’s actions?

When Lulu first meets Ben, she notes, “Our lives blended neatly one into the other with no messy edges” (pg. 123). Is this a good or bad thing for Lulu? Ultimately, why is it not enough?

While working on a new piece, artist Frank Andrews consults Harry de Longland: “I can’t get the black right.” Harry replies, “Black’s black, isn’t it?” Frank answers, “No, mate, there’s all kinds of blackness” (pg. 144). There is a complicit understanding between the two as they think of their wives. Consider the many shades of both Annie and Rose’s “blackness.” How does it manifest for each woman? How does it affect their respective families; their respective daughters?

When Lulu receives the invitation to Annabelle and Josh’s wedding, she despairs, “What had I been thinking? That Josh would leave Annabelle for me? That Annabelle would leave Josh for me? That they would take me with them wherever they traveled to next? That they would realize that out of all of us, I was the one worth hanging on to?” (pg. 189) What outcome do you think Lulu would prefer—that Josh would come back for her, proving her the more desirable of the two women? Or that Annabelle would leave Josh so they might rekindle their friendship? At the end of the novel, is either Josh or Annabelle the greatest love of Lulu’s life?

Frank Andrews reveals the tree house in his backyard needs to be taken down, as ordered by the neighborhood council (pg. 285). What does the tree house symbolize for Lulu? Why is she determined to fight against its destruction?

When Lulu first senses the advances of the charming Will Barton, Duncan’s friend on Willow, why does she seemingly try to avoid him at all cost, claiming she doesn’t deserve him (pg. 289)? What ultimately allows her to give into her own feelings and give in to Will?

Discuss the role of guilt and forgiveness in Walking on Trampolines. How do the two intertwine and develop in the following relationships: a) Annabelle and Josh vs. Lulu, b) Lulu vs. Ben, c) Annie vs. Frank, etc. Most of all, think about how Lulu experiences guilt and forgiveness within herself.

Before Lulu sees Rose descend into the ocean, her mother

whispers, “There is no such thing as afar” (pg. 320). After Rose’s funeral, Lulu says the same to her father. What does the sentiment mean to Rose? Does it mean the same thing to Lulu?

Consider Duncan McAllister’s role in Lulu’s life, outside the

realm of employer/employee. Why do Duncan and Lulu