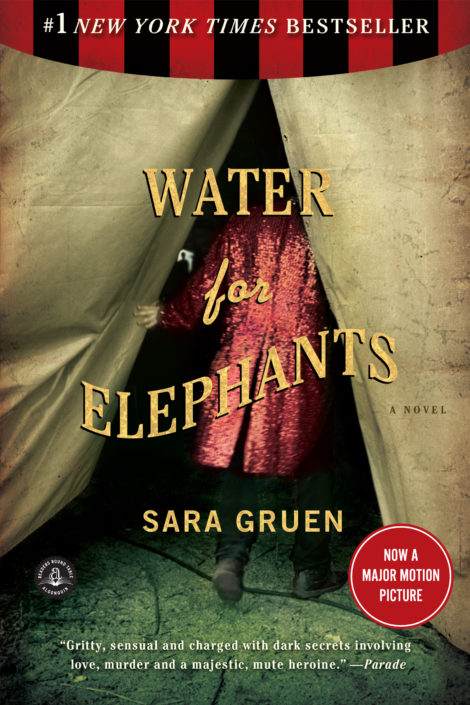 As a young man, Jacob Jankowski was tossed by fate onto a rickety train that was home to the Benzini Brothers Most Spectacular Show on Earth. It was the early part of the great Depression, and for Jacob, now ninety, the circus world he remembers was both his salvation and a living hell. A veterinary student just shy of a degree, he was put in charge of caring for the circus menagerie. It was there that he met Marlena, the beautiful equestrian star married to August, the charismatic but twisted animal trainer. And he met Rosie, an untrainable elephant who was the great gray hope for this third-rate traveling show.

As a young man, Jacob Jankowski was tossed by fate onto a rickety train that was home to the Benzini Brothers Most Spectacular Show on Earth. It was the early part of the great Depression, and for Jacob, now ninety, the circus world he remembers was both his salvation and a living hell. A veterinary student just shy of a degree, he was put in charge of caring for the circus menagerie. It was there that he met Marlena, the beautiful equestrian star married to August, the charismatic but twisted animal trainer. And he met Rosie, an untrainable elephant who was the great gray hope for this third-rate traveling show. The bond that grew among this unlikely trio was one of love and trust, and, ultimately, it was their only hope for survival.

Sara Gruen is the author of the bestseller Riding Lessons and Flying Changes. She lives north of Chicago with her husband, her three children, four cats, two goats, two dogs, and a horse.

“Water for Elephants resembles stealth hits like The Giant’s House, by Elizabeth McCracken, or The Lovely Bones, by Alice Sebold, books that combine outrageously whimsical premises with crowd-pleasing romanticism. . . . With a showman’s expert timing, [Gruen] saves a terrific revelation for the final pages, transforming a glimpse of Americana into an enchanting escapist fairy tale.” —The New York Times Book Review

2. How does the novel’s epigraph, the quote from Dr. Seuss’s Horton Hatches the Egg, apply to the novel? What are the roles and importance of faithfulness and loyalty in Water for Elephants? In what ways does Gruen contrast the antagonisms and cruelties of circus life with the equally impressive loyalties and instances of caring?

3. Who did you, upon reading the prologue, think murdered August? What effect did that opening scene of chaos and murder have on your reception of the story that follows?

4. In connection with Jacob’s formal dinner with August and Marlena in their stateroom, Jacob remarks, “August is gracious, charming, and mischievous” (page 93). To what extent is this an adequate characterization of August? How would you expand upon Jacob’s observation? How would you characterize August? Which situations in the novel reveal his true character?

5. August says of Marlena, “Not everyone can work with liberty horses. It’s a God-given talent, a sixth sense, if you will” (page 94). Both August and Jacob recognize Marlena’s skills, her “sixth sense,” in working with the horses. In what ways does that sixth sense attract each man? How do August and Jacob differ in terms of the importance each places on Marlena’s abilities?

6. After Jacob puts Silver Star down, August talks with him about the reality of the circus. “The whole thing’s illusion, Jacob,” he says, “and there’s nothing wrong with that. It’s what people want from us. It’s what they expect” (page 104). How does Gruen contrast the worlds of reality and illusion in the novel? Is there anything wrong with pandering to people’s need for illusion? Why do we crave the illusions that the circus represents?

7. Reflecting on the fact that his platitudes and stories don’t hold his children’s interest, the elderly Jacob notes, “My real stories are all out of date. So what if I can speak firsthand about the Spanish flu, the advent of the automobile, world wars, cold wars, guerrilla wars, and Sputnik—that’s all ancient history now. But what else do I have to offer?” (page 110). How might we learn to appreciate the stories and life lessons of our elders and encourage people younger than ourselves to appreciate our own?

8. Looking at himself in the mirror, the old Jacob tries “to see beyond the sagging flesh.” But he claims, “It’s no good. . . . I can’t find myself anymore. When did I stop being me?” (page 111). How would you answer that question for Jacob or any individual, or for yourself?

9. In what ways and to what degree do Uncle Al’s maneuvers and practices regarding the defunct Fox Brothers circus reflect traditional American business practices? How would you compare his behavior with that of major businessmen and financiers of today? What alternative actions would you prefer?

10. As he lies on his bedroll, after his night with Barbara and Nell, Jacob cannot empty his mind of troubling visions, and he reflects that “the more distressing the memory, the more persistent its presence” (page 143). How might the elderly Jacob’s memories corroborate or contradict this observation? What have been your experiences and observations in this regard?

11. In his Carnival of the Animals, Ogden Nash wrote, “Elephants are useful friends.” In what ways is Rosie a “useful” friend? What is Rosie’s role in the events that follow her acquisition by Uncle Al?

12. After Jacob successfully coaches August in Polish commands for Rosie, he observes, “It’s only when I catch Rosie actually purring under August’s loving ministrations that my conviction starts to crumble. And what I’m left looking at in its place is a terrible thing” (page 229). What is Jacob left “looking at,” how does it pertain to August’s personality and Jacob’s relationship with August, and what makes it a “terrible thing”?

13. How did you react to the redlighting of Walter and Camel, and eight others, off the trestle? How might we see Uncle Al’s cutthroat behavior as “an indictment of a lifetime spent feigning emotions to make a buck” (in the words of one reviewer)?

14. After the collapse of the Benzini Brothers circus and Uncle Al’s having “done a runner” (page 314), Jacob realizes, “Not only am I unemployed and homeless, but I also have a pregnant woman, bereaved dog, elephant, and eleven horses to take care of” (page 317). What expectations did you entertain for Jacob and Marlena’s—and their menagerie’s— future after they leave the Benzini Brothers circus? How do the elderly Jacob’s memories of Marlena and their life together confirm or alter those expectations?

15. At the end of the novel, Jacob exclaims, “So what if I’m ninety-three? . . . why the hell shouldn’t I run away with the circus?” (page 331). What would you project to be the elderly Jacob’s experiences after he runs away with the circus the second time? How does his decision reflect what we have learned about his early years?

16. Sara Gruen has said that the “backbone” of her novel “parallels the biblical story of Jacob,” in the book of Genesis. On the first night after his leaving Cornell, for example, Jacob—as did his biblical namesake— lies “back on the bank, resting my head on a flat stone” (page 23). In what other ways does Water for Elephants parallel the story of the biblical Jacob? How do the names of many of the characters reflect names of characters in the biblical account?

17. In the words of one reviewer, Water for Elephants “explores . . . the pathetic grandeur of the Depression-era circus.” In what ways and to what extent do the words “pathetic grandeur” describe the world that Gruen creates in her novel?