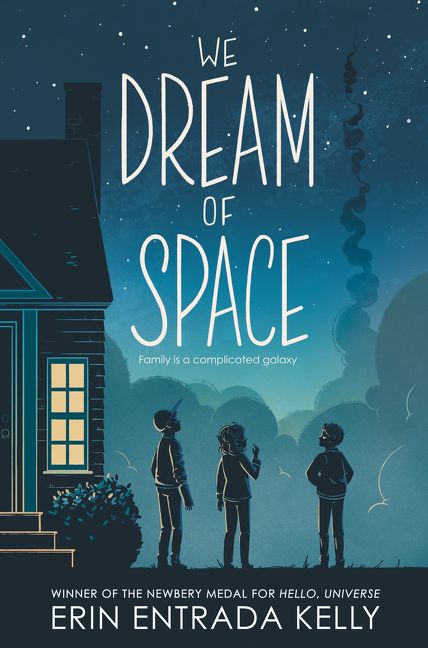 WE DREAM OF SPACE

Newbery Medalist and New York Times–bestselling author Erin Entrada Kelly transports readers to 1986 and introduces them to the unforgettable Cash, Fitch, and Bird Thomas in this pitch-perfect middle grade novel about family, friendship, science, and exploration.

Cash, Fitch, and Bird Thomas are three siblings in seventh grade together in Park, Delaware. In 1986, as the country waits expectantly for the launch of the Space Shuttle Challenger, they each struggle with their own personal anxieties.

Cash, who loves basketball but has a newly broken wrist, is in danger of failing seventh grade for the second time.

Newbery Medalist and New York Times–bestselling author Erin Entrada Kelly transports readers to 1986 and introduces them to the unforgettable Cash, Fitch, and Bird Thomas in this pitch-perfect middle grade novel about family, friendship, science, and exploration.

Cash, Fitch, and Bird Thomas are three siblings in seventh grade together in Park, Delaware. In 1986, as the country waits expectantly for the launch of the Space Shuttle Challenger, they each struggle with their own personal anxieties.

Cash, who loves basketball but has a newly broken wrist, is in danger of failing seventh grade for the second time. Fitch spends every afternoon playing Major Havoc at the arcade on Main and wrestles with an explosive temper that he doesn’t understand. And Bird, his twelve-year-old twin, dreams of being NASA’s first female shuttle commander, but feels like she’s disappearing.

The Thomas children exist in their own orbits, circling a tense and unpredictable household, with little in common except an enthusiastic science teacher named Ms. Salonga. As the launch of the Challenger approaches, Ms. Salonga gives her students a project—they are separated into spacecraft crews and must create and complete a mission. When the fated day finally arrives, it changes all of their lives and brings them together in unexpected ways.

Told in three alternating points of view, We Dream of Space is an unforgettable and thematically rich novel for middle grade readers.

We Dream of Space is illustrated throughout by the author.

New York Times–bestselling author Erin Entrada Kelly was awarded the Newbery Medal for Hello, Universe.  Her debut novel, Blackbird Fly, was a Kirkus Best Book, a School Library Journal Best Book, an ALSC Notable Book, and an Asian/Pacific American Literature Honor Book. She is also the author of The Land of Forgotten Girls, winner of the Asian/Pacific American Award for Literature, and You Go First, a New York Times bestseller, Spring 2018 Indie Next Pick, Kirkus Reviews Best Book, and School Library Journal Best Book. She grew up in Lake Charles, Louisiana, and now lives in Delaware.

“Newbery Award–winner Kelly follows three Delaware siblings in the weeks leading up to the January 1986 launch of the Challenger. . . . Kelly shows the incredible power of words—the irreparable damage they inflict and their ability to uplift—while crafting a captivating story about family’s enduring bonds.” – Publishers Weekly (starred review)

“Entrada Kelly tells the story . . . of Cash, Fitch and Bird . . . [and their] power to form the family they want themselves. Lyrical but direct writing, relatable characters, and an engaging 1980s setting give this thoughtful read high appeal for middle grade readers.” – School Library Journal (starred review)

“With short chapters focusing alternately on each sibling, Kelly establishes distinct and original characters . . . Kelly creates a crisp, moving portrait of family dysfunction and the resilience of the young.” – Horn Book (starred review)

“Kelly writes a heartfelt story of family and the bond of siblings. . . . Put this book in your orbit.” – Kirkus Reviews

The pinball machine didn’t steal Fitch Thomas’s quarter. Not really. But when one of the flippers is broken, there’s no point in playing. As soon as Fitch realized this, something sparked inside him. Something ugly and familiar. He stared at the slot where he’d sunk his quarter only moments before.

Easy does it, Fitch. Just go to Mr. Hindley’s office and get your quarter back. No big deal.

The blinking lights of the machine—Bright Star One, it was called—seemed out of place in the arcade today. Fitch looked around. He was one of the only people there.

Maybe it was too early for people.

It was never too early for him.

READY FOR TAKEOFF, the lights blazed. He left them behind and walked to Mr. Hindley’s office.

The door with MANAGER stenciled above the frame was open, as usual. Mr. Hindley was manager, owner, and staff. When quarters were stolen, he was the man to see.

Mr. Hindley looked up from his ledger. “Henry Nelson Thomas, my favorite patron! What brings you to the front office?”

This was what Mr. Hindley always said, even though no one called him Henry and Mr. Hindley’s office was in the back corner of the small arcade. Nowhere near the front.

“One of the machines is broken,” he said.

Mr. Hindley placed both hands on his desk and stood up, like President Reagan ready to face the Soviets.

“That is unacceptable, patron Thomas,” he said.

Mr. Hindley was what Fitch’s mother would call “an odd duck,” but he moved fast. Within seconds he was in front of the Major Havoc game in the center of the arcade, squinting at the screen.

“Not that one,” Fitch said. He pointed at Bright Star One. “This one.”

Mr. Hindley raised his eyebrows. “But you’re a Major Havoc guy. One from all, all from one, fighting for humanity and all that.”

Yes, it was true. On any given day, Fitch could be found at the Park, Delaware, arcade—officially named the Pinball Wizard, but known to the locals as the “arcade on Main”—playing Major Havoc, a game that his best friend, Vern Repass, said was a “Star Wars wannabe,” even though Major Havoc had been released first, but whatever. Vern was so obsessed with Star Wars that Fitch had developed unfounded resentment toward Luke, Han Solo, and the whole lot of them. (Except Vader, maybe. Vader was kinda cool.) The more Vern ragged on Major Havoc, the more dedicated and defensive Fitch became, and now he was so preoccupied with beating his own high score that Major Havoc—in all his vector-graphic glory—sometimes appeared in his dreams, demanding that he get to the reactor before everyone exploded.

But today was January first, and Fitch had made a New Year’s resolution to try something different. The last time he was here, his twin sister had come along and been entranced by Bright Star One, with its spaceship and lights. She didn’t want to actually play it—video games were not her thing—but she tried to convince him to give it a chance. He’d snapped at her to leave him alone, then felt bad about it later. So he’d gone for the pinball machine this morning, even though no one played pinball anymore. And now look what had happened.

Mr. Hindley made his way to Bright Star One and tapped it affectionately.

Mr. Hindley pushed the button. When nothing happened, he said, “It’s impossible to play a respectable game of pinball with just one flipper.”

Mr. Hindley disappeared into the office and emerged seconds later with a sheet of paper with “OUT OF ORDER” written across it in fat black letters. The smell of Magic Marker wafted in the air as he taped it across Bright Star One.

“Thanks for the heads-up, patron Thomas,” Mr. Hindley said. He smiled. It was wide and pleasant and took up most of his face. “Anything else I can help you with?”

Yeah, you can give me my quarter, Fitch thought. But he didn’t say it out loud. The fire was too bright.