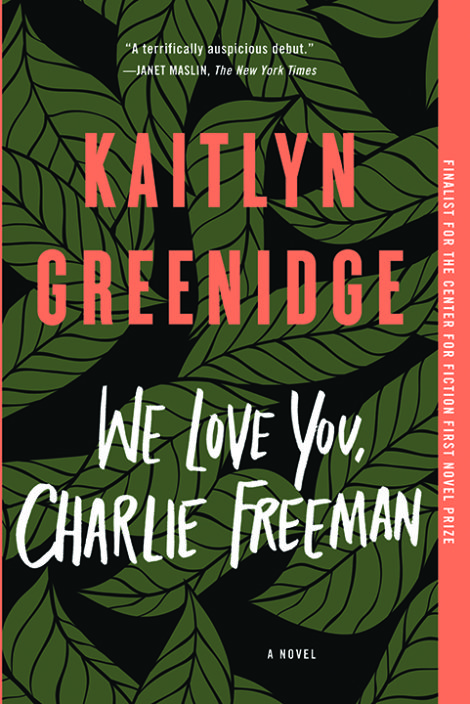 WE LOVE YOU, CHARLIE FREEMAN

The Freeman family—Charles, Laurel, and their daughters, teenage Charlotte and nine-year-old Callie—have been invited to the Toneybee Institute to participate in a research experiment. They will live in an apartment on campus with Charlie, a young chimp abandoned by his mother. The Freemans were selected because they know sign language; they are supposed to teach it to Charlie and welcome him as a member of their family. But when Charlotte discovers the truth about the institute’s history of questionable studies, the secrets of the past invade the present in devious ways. The power of this shattering novel resides in Greenidge’s undeniable storytelling talents.

The Freeman family—Charles, Laurel, and their daughters, teenage Charlotte and nine-year-old Callie—have been invited to the Toneybee Institute to participate in a research experiment. They will live in an apartment on campus with Charlie, a young chimp abandoned by his mother. The Freemans were selected because they know sign language; they are supposed to teach it to Charlie and welcome him as a member of their family. But when Charlotte discovers the truth about the institute’s history of questionable studies, the secrets of the past invade the present in devious ways. The power of this shattering novel resides in Greenidge’s undeniable storytelling talents. What appears to be a story of mothers and daughters, of sisterhood put to the test, of adolescent love and grown-up misconduct, and of history’s long reach, becomes a provocative and compelling exploration of America’s failure to find a language to talk about race. 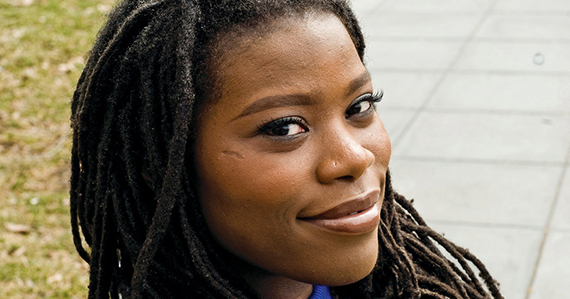 Kaitlyn Greenidge was born in Boston. She received her MFA from Hunter College. Her work has appeared in the New York Times, The Wall Street Journal, Elle.com, Lenny Letter, The Believer, American Short Fiction, Guernica, and The Virginia Quarterly Review, among others. She is the recipient of fellowships from the National Endowment for the Arts, the Lower Manhattan Community Council’s Workspace Program, the Bread Loaf Writers’ Conference, and other prizes. She currently lives in Brooklyn.

“Terrifically auspicious . . . Ms. Greenidge has charted an ambitious course for a book that begins so mock-innocently. And she lets the suspicion and outrage mount as the Freemans’ true situation unfolds. This author is also a historian, and she makes the ‘1929’ on Toneybee plaque tell another, equally gripping story that strongly parallels the Freemans’ 1990 experience.” —Janet Maslin, The New York Times

“…witty and provocative…Greenidge deftly handles a host of complex themes and characters, exploring not just how (literally) institutionalized racism is, but the difficulty of an effective response to it…Greenidge doesn’t march to a pat answer; the power of the book is in her understanding of how clarity wriggles out of reach. For all the seriousness of its themes, though, Charlie Freeman is also caustically funny.” —USA Today

“Kaitlyn Greenidge’s masterful debut novel is at heart an examination of race and language — an African-American family is hired by a New England research institute to raise and teach sign language to a chimpanzee, but the institute has a shockingly dark past. We Love You, Charlie Freeman skillfully tackles history and heavy subjects with both humor and thoughtfulness; this book proves Greenidge will be a literary force to be reckoned with.” —Buzzfeed.com

2. Language, both how we use it and how it fails us, is an important theme in this book. Laurel learns to sign largely because of how she’s treated when she speaks. Can you think of a moment in your life when you felt hindered by language? How did you overcome this?

3. Laurel does things that many consider shocking, from moving the family to the Toneybee Institute to allowing Charlie to attempt to breastfeed. What did you think of Laurel’s actions? What insights into her character did they provide?

4. What did you think of Julia Toneybee-Leroy’s letter? Were you surprised by it? How did you feel about its placement in the book?

5. This book is in many ways the story of Callie and Charlotte’s relationship. Did you find yourself drawn to one over the other? If you have a sister, how does their relationship compare to yours?

6. Some have commented on the “big brother” feeling of the apartment and the institute’s use of cameras. What do you think is Greenidge’s intent here?

7. Julia Toneybee-Leroy writes that she admires Callie because she has managed to stay emotionally open and loving. Is this stance something that ultimately hurts or benefits Callie?

8. Is Charlie a force for good or ill? Or is he a neutral force in this book?

9. Why do you think Adia demonstrates such confusing actions toward Charlotte?

10. Laurel says to Charlotte that the Breitlings “live for the breaking down. They don’t know anything about the building up” (page 183). She thinks that their activism and questioning are damaging. What are the benefits of speaking up in the face of wrongdoing? What are the drawbacks? In your personal experience, has speaking out against an injustice outweighed the drawbacks? How?

11. Dr. Gardner believes he “loves” African American people. What do you think he means when he uses that word? How do his actions prove or disprove his words?

12. Why do you believe Charles continues to love Laurel?

Harmony and Discord
by Kaitlyn Greenidge

Sometimes, when my mother was very tired, her words would fail her and she would sign to me and my sisters instead. Usually she only got as far as signing “stop”—open palm, one hand coming down on the other, easy enough to translate. “You’re doing it again!” one of us would shriek, and she would catch herself and sigh, exasperated, “Girls.”

Like all the women in my family, my mother loves language—gusts of words and coaxings and questions, always questions. She is almost never at a loss for words, but when my sisters and I were younger we did our best to overwhelm her, to see what it took to get her words to go and her signing to take over.

Our mother learned to sign because she is, above all, a curious person. It is a trait that’s led her many places in her life. To a deaf university, Gallaudet, for graduate school. To the backwoods of 1970s Maryland to work with the developmentally disabled children warehoused in the state’s asylums, about to be released into a world that wasn’t ready for them. But my favorite story of where her curiosity took her—well, almost took her—was to a research institution in upstate New York, to live with a chimp and raise it. This was before I was born, when she was a newlywed. She was living in Brooklyn and taking advanced signing classes at Hunter College. She interviewed for the job, and they wanted her right away when they found out one of her daughters was two years old. To my sisters’ and father’s eternal disappointment, my mother said no. “I realized I’d have to raise that animal as my own. And then leave it behind, when we would move—it was too cruel,” she explained. My father grumbled about the loss of a good deal—the mysterious institution, never named in her recollections, would have given them a house in Westchester County, rent-free, and a car. My older sisters lamented a lost playmate.

I thought about that story for many years, and then I decided I wanted to write about it. I did some research and found that raising a chimp alongside one’s child is actually a surprisingly common occurrence. There are numerous memoirs about the strangeness of sharing space with an animal, the loneliness of difference, the sadness of losing one’s sibling.

Even as I read those memoirs and became interested in writing about that story, I knew that I wanted the novel to be about something more than just that experience.

It became evident to me that there was something wrong with how Americans attempted to talk about race. There was a given narrative that most people, or people who counted themselves as decent people, generally followed. This narrative was known by black people and nonblack people. It was obsessed with progress. It was uplifting. It did not allow for tangents or for misfits or for bitterness. Then there were those deeply invested in a version of black history that only cared about the pain, the degradation, the terror. This faction rejected any attempt to explore a position other than the defensive, arguing that any experience less than constant trauma was not authentic enough. And then, of course, there were those who wished so badly for American ideals—liberty and justice for all—to be true that they refused to acknowledge any atrocities at all.

It became clear that language was failing me, was failing all of us. And our stories about the past were failing us as well. The stories and the language that we used were obscuring what needed to be said.

I decided to use the story of a pretend experiment (similar to the job my mother was offered decades ago) to talk about the intricacies of race and memory and history. We Love You, Charlie Freeman is about a black family that moves to a nearly all-white town in western Massachusetts to teach sign language to a chimpanzee named Charlie. The Freemans are chosen to take part in the experiment because of their race, and the citizens of the town they move to and the research institute sponsoring the experiment are chronically stymied, unable to address or even acknowledge transgressions of the past and present.

Interwoven with the story of this family is the story of Nymphadora, a black woman in the 1920s whose connection to the research institute involves a crime linked to its founding. The decision to include Nymphadora came about because I’ve been fascinated by the American eugenics movement since I was in college. A book I came back to again and again while writing this novel was The Mismeasure of Man, Stephen Jay Gould’s exploration of scientific racism in nineteenth- and twentieth-century American academia. What that book provided, and what I tried to bring into this novel, was other stories about race, other narratives besides the pat ones I’d encountered as a historical interpreter, about what it means to be a white or a black or a raced person in the United States.

This book is an attempt to join in the conversation that the United States has had since its founding, our never-ending story and cry and argument about race. It’s an attempt to make peace with the language we have now, in this moment—broken and inadequate and wondrous all at once.