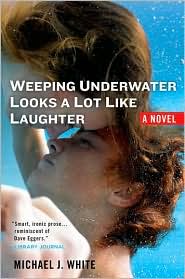 George Flynn is the new nobody at St. Pius High School, until he falls in with the enchanting Schell sisters. Emily, an aspiring actress, is the object of his infatuation. But there’s something special about her quirky younger sister, Katie, who has her own crush on George, not to mention a scathing deadpan sense of humor in the face of multiple sclerosis. When an accident destroys their delicate balance, George and Emily find themselves searching for forgiveness yet losing each other. With no-holds-barred honesty and razor-sharp wit, Michael J. White’s debut novel explores friendship, first love, and a young man’s need to come of age without coming undone.

George Flynn is the new nobody at St. Pius High School, until he falls in with the enchanting Schell sisters. Emily, an aspiring actress, is the object of his infatuation. But there’s something special about her quirky younger sister, Katie, who has her own crush on George, not to mention a scathing deadpan sense of humor in the face of multiple sclerosis. When an accident destroys their delicate balance, George and Emily find themselves searching for forgiveness yet losing each other. With no-holds-barred honesty and razor-sharp wit, Michael J. White’s debut novel explores friendship, first love, and a young man’s need to come of age without coming undone.

Michael White is a former science editor of British GQ. In a previous incarnation he was a member of the Thompson Twins pop group, and then a science lecturer in Oxford. He is the author of twenty books including the international best-seller, Stephen Hawking: A Life In Science (with John Gribbin). Since then he has written an alternative biography of Isaac Newton, Isaac Newton: The Last Sorcerer, which was nominated by four British newspapers as “biography of the year” in 1997 and awarded “Book of the Year” in the science category by Bookman Associates in the United States.

His latest books are the international best-seller Leonardo: The First Scientist and Michael White’s personal account of the ’80s and his time in the music industry, titled: Thompson Twin: An ’80s Memoir. His latest is Acid Tongues and Tranquil Dreamers-a study of scientific rivalry from Newton to Gates published in 2001. He lives in Kent, England with his wife and three children.

“A blood-red first love story, a raw dealing of tragedy and its aftermath, and a wild spin through the lust and grief-addled mind of one of the most honest and deliriously inventive narrators I’ve ever read. Weeping Underwater will leave you hoarse from laughing, weak in the knees, possibly craving Iowa State Fair pickles, and helplessly in love.” —Karen Russell, author of St. Lucy’s Home for Girls Raised by Wolves

How does George and Zach Flynn’s relationship grow over the course of the story? Do you sense that one looks up to the other and, if so, who and why? Do their roles ever shift throughout their lives?

Why do you feel Mrs. Schell is so strict with Emily? Do you believe Katie’s condition plays a factor in this behavior?

Emily Schell is one of the most sought-after girls at St. Pius High School. George Flynn is a complete stranger that she takes under her wing soon after his arrival in Des Moines. What do you believe first brought these two together?

How do George’s parents influence his relationship with Emily and the Schell family?

After botching up a boat motor theft, Marcus Panozzo blames “the new kid from Davenport” for his delinquent behavior. Word spreads quickly through the town and Mrs. Schell assumes that George is a bad influence and a troubled teen. Why do you think Emily refuses to stand up for George’s reputation and end Mrs. Schell’s negative opinion of him?

Sadly, the Schell household begins to unravel soon after Katie’s accident. How does Katie’s death affect each member of the family differently? How do you think the family would’ve reacted if Emily had been the daughter lost to Saylorville Lake?

How does Mrs. Schell’s past contribute to her attitude towards others and her outlook on marriage?

What reason could Emily have had for allowing the student body to believe that she lost her virginity to Peyton Chambeau?

Throughout the course of the story, George and Emily’s physical relationship becomes more aggressive and experimental. Do you feel their intimacy decreases as their sexual encounters increase? If so, why is this happening? If not, what do you feel ultimately pulls them apart?

George jokingly asks Emily how she “fit[s[ into the whole scene.” How does Emily fit into the different “worlds” of their little town? High school? Family? How is Emily as much of an outsider as George is?

Emily teases George, “Just promise not to marry my sister, okay? At least not until she’s eighteen.” George is drawn to Emily almost immediately, but his connection with Katie is also undeniable. How might George and Katie’s relationship have developed if she hadn’t drowned? Do you believe her age and disease were the main reasons why George never reciprocated Katie’s affections? Which Schell sister do you believe would have been the right partner for George, and why?

Other than George, Thomas Staniszewski seems to have been Katie’s only close male friend. Possibly even her first romantic interest. Why do you think Katie kept the news of her clinical trial at the Mayo Clinic from George? What else do you think Thomas knew about Katie that she refused to share with anyone else? Was Thomas aware of her feelings for George?

Katie advises George not to show his affections so easily. Do you think she was giving him advice on how to court Emily, or were her words of wisdom somehow an indication of her own feelings towards George?

Sadly, the truth behind Katie’s drowning will forever remain a mystery. Do you think it is possible that the incident may not have been an accident at all? Could Katie have staged the accident in an attempt to gain George’s attention? Could Katie have wanted to choose her own fate rather than having a medical procedure or a disease decide for her? Plagued with both MS and unrequited love, what did Katie have to live for? Discuss.

The themes of first and last loves pepper the pages of this book. We also see recurring examples of how a relationship can completely change an individual for better or worse. Compare and contrast the pairings in this story (Mr. Finey and his wife, Mr. & Mrs. Schell, Katie and George, George and Emily, Zach and Rachel, etc.) and how love transforms them.

Emily asks, “[i]sn’t it possible to love someone and not tell them everything about your life before you met them? Is that what marriage is—an agreement to confess every mistake we ever made, every thought or memory that passes through our heads?” Discuss the secretive nature of the Schell woman and the effect it has on the men around them.

Why is George consumed with images and thoughts of Katie during his first sexual experience with Emily at Saylorville Beach? Was the impulsive encounter a response to the loss they both felt or simply the emotion that had built up between them? How do sex and loss go hand in hand in this story?

What were George’s reasons for finally sitting down and recapping the details of the accident with the Schells? Why do you believe Emily insisted on letting her parents believe one version of the story while she knew George recounted the incident differently? How did this conversation provide closure for any or the parties involved?