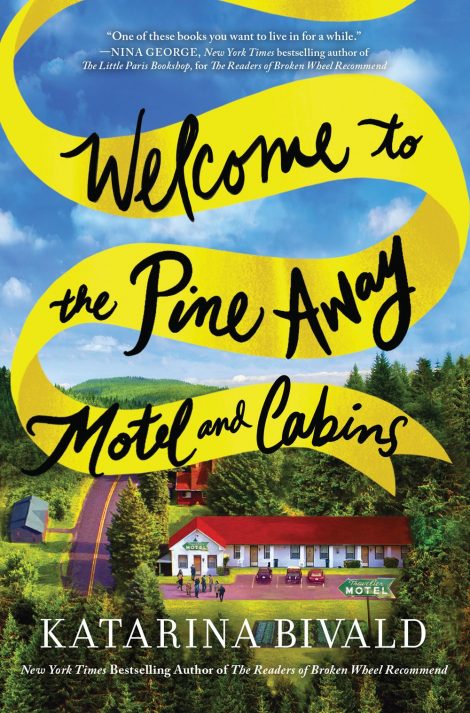 WELCOME TO THE PINE AWAY MOTEL AND CABINS

From New York Times bestselling author of The Readers of Broken Wheel Recommend comes a charming tale of a ramshackle roadside motel: a heartwarming story of love, friendship, community, and the art of living, even when it’s already too late.

The Pine Away Motel has seen better days. Henny would call it charming, but she’s always seen the best in things. Like now, when she’s just met an untimely end crossing the road. She’s not going to let a tiny thing like death stop her from living fully–not when her friends and family need her the most.

From New York Times bestselling author of The Readers of Broken Wheel Recommend comes a charming tale of a ramshackle roadside motel: a heartwarming story of love, friendship, community, and the art of living, even when it’s already too late.

The Pine Away Motel has seen better days. Henny would call it charming, but she’s always seen the best in things. Like now, when she’s just met an untimely end crossing the road. She’s not going to let a tiny thing like death stop her from living fully–not when her friends and family need her the most.

After the funeral is over, her body is buried, and the last casserole dish is empty, Henny is still around. She’s not sure why, but she realizes she has one last opportunity to help her friends discover the happiness they once knew before they lose the motel and cabins they’ve cherished for years.

Katarina Bivald is the author of the instant New York Times bestseller and #1 Indie Next pick The Readers of Broken Wheel Recommend. She lives outside of Stockholm, Sweden. She grew up working part-time in a bookshop.

“In a story about the lives a single person can touch, the highlight is fittingly Bivald’s memorable characterizations, as she makes each person and their needs distinct and complex. This is a winning novel about the lasting impact of love.” – Publishers Weekly

“Remarkable…unquestionably a page turner and full of wisdom. A brave, unusual book, which powerfully portrays friendship and love.” – Felicity Hayes-McCoy, author of The Library at the Edge of the World

“Katarina Bivald talks about her characters like you talk about your best friends. She gives her story absolutely everything she has. You’ll care when you read because she really, really cared when she wrote.” – Fredrik Backman, #1 New York Times bestselling author of A Man Called Ove

“Hopeful, heartening, and humane, this is the novel I needed to read right now.” – J. Ryan Stradal, author of The Lager Queen of Minnesota and Kitchens of the Great Midwest

“A novel of irresistible characters who make you believe in the power of hard-won wisdom and second chances, Welcome to the Pine Away Motel and Cabins is a delight!” – Linda Francis Lee, author of The Glass Kitchen

“Bivald’s charming, heartwarming, and thought-provoking novel will linger long after the last page is turned.” – Booklist

1. Describe the relationship between Henny, Camila, MacKenzie, and Michael. Would you want to be friends with them? Who was your favorite?

2. Talk about the influence of social media in this book. How did it help the motel? In what ways did social media harm it?

3. Many people in the town claim that they don’t hate gay people, but they never speak up in defense of MacKenzie, Camila, or the motel. Does their silence inflict damage? In what way?

4. Discuss Robert, Henny’s dad. What is he like? How does he change by the end of the book?

6. Pine Creek is host to a quirky cast of characters. Did you have a favorite townsperson? Why?

7. You can learn a lot about a person by looking at the people who love them. After reading about MacKenzie, Dolores, Buddy, Alejandro, Camila, and Michael, just to name a few, what did you learn about Henny?

8. As a ghost, Henny tries to influence the people around her by whispering to them. Do you think her efforts work, or do her friends save the day on their own?

9. Talk a little about Stacey and Robert’s friendship. How do they help each other?

10. MacKenzie spends her life in a town that unfairly condemns her identity. Why do you think she stays? What would you do?

11. Describe why it was so difficult for Camila to return to Pine Creek. What obstacles did she face? How did she overcome them?

12. How did you feel about Henny staying behind at the Pine Away Motel at the end of the story? Did it strike you as sad?

13. Do you think the town will be able to put aside its differences after Henny’s memorial? Why or why not?

14. What do you think happens to Henny after the story ends? Does she stay in Pine Creek? Does she move on?

My funeral begins in an hour.

I’m pretty sure I’m going to miss it. Right now I’m sitting on the motel rooftop, looking down on an almost-empty parking lot.

I imagine myself floating through the air, higher and higher, as if I’ve finally gotten the hang of flying. So high that everyone is nothing but tiny black dots, making their way to the Pine Creek United Methodist Church. Dad is probably already there, waiting patiently inside, an especially black dot on my own internal map. Cheryl will be with him, no doubt, like the supportive Christian neighbor that she is. I try to be angry with the two of them, but I don’t seem to have the energy anymore.

Before long, they’ll be joined by friends and former classmates, vague acquaintances, teachers I once had, Dad’s neighbors.

A confident guess at who will attend a funeral in Pine Creek: everyone.

They’ll try to sing along to old- fashioned hymns, and they’ll listen to the pastor’s empty eulogy. Dad will be sitting at the front, brave and desperately proper.

And then I’ll be cremated. A rather bold and surprising choice from Dad. I approve, but I’m apprehensive as well. On the one hand, I’d rather burst into flames than be shoved underground. I’ve always been a little bit afraid of the dark. But on the other hand, I worry that this— what’s left of me, my soul or consciousness or whatever you want to call it—will disappear when my body does.

I don’t think you can go on being a ghost forever. No matter how much you want to. There’d be more of us around if you could, that’s for sure. Maybe most people never even get the chance to stick around and see how their loved ones are doing. Maybe I should be grateful for the opportunity.

I’m talking about smoke and picturing myself engulfed in a wall of flames, but that’s not how it works. The body— my body—will be heated through calcination. Everything organic, roughly 97 percent of me, will first turn to liquid and then become hot gas. They’ll add oxygen so that the body can burn entirely without flames.All that will be left of me is ash. Surely no soul can survive it?

Ash is actually a pretty misleading word. It’s not like a fine ash automatically appears afterward, ready to be stored in an urn or buried under a headstone or sprinkled somewhere, whatever Dad plans to do with it. You need a special processor to grind the remains into a kind of fine-grained sand.

But I don’t think that has quite the same ring to it. For the relatives, I mean. “Here is Henny’s sand.”

The whole process takes around two hours. I wish I knew exactly when everything was going to happen, so that I could prepare myself. It would be awful to disappear midthought. Or be thinking something completely meaningless when it happened—I wonder what time it is—and then nothing.

No, I want my very last thought to be grand and beautiful and important. A final message, even if I’m the only one who hears it.

Below me, the motel is closed for the first time since a snowstorm left us without power for three days in 2003. The reception area is dark, the computers switched off. The restaurant is eerily empty, all the chairs upside down on the tables. The rooms are locked. Only two cars are there: Camila’s and MacKenzie’s.

On the other side of the parking lot, the Pine Creek Motel sign glows faintly in the daylight.

Beneath that is a patchwork of strange little signs made from cheap metal, in all imaginable sizes, colors, and styles:

Microwaves in every room!

Check in at the Pine Away Motel

Vote No on Measure 9!