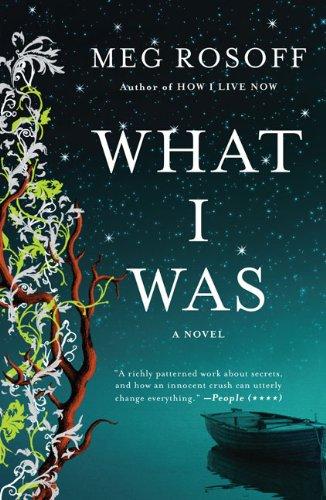 In the mid-twenty-first century, an elderly man named Hilary looks back through the decades to his days at St. Oswald’s, a dreary English boarding school. Though the school and much of the coastline around it have since slipped into the sea, Hilary’s memories of that time and place are vivid. A low-achiever kicked out of two previous schools, Hilary suspected that St. Oswald’s, like the others, would offer nothing more than bourgeois manners and gory lessons from the Dark Ages. Surviving its rigid routines and joyless days would be a matter of will. When he encounters a strange young boy named Finn,

In the mid-twenty-first century, an elderly man named Hilary looks back through the decades to his days at St. Oswald’s, a dreary English boarding school. Though the school and much of the coastline around it have since slipped into the sea, Hilary’s memories of that time and place are vivid. A low-achiever kicked out of two previous schools, Hilary suspected that St. Oswald’s, like the others, would offer nothing more than bourgeois manners and gory lessons from the Dark Ages. Surviving its rigid routines and joyless days would be a matter of will. When he encounters a strange young boy named Finn, however, everything changes. Hilary is immediately fascinated with Finn’s solo life in an ancient hut by the sea, free of rules, family obligations and the indignities Hilary routinely suffers at the hands of his schoolmates. Finn is not just free—he is practically living in another era. He fishes and kayaks, reads history books, and cooks his own meals. Finn, who has no hospital or school records, does not exist to the rest of the world. To Hilary, he is the center of the universe.

The two boys develop an unusual friendship, with Hilary risking his school career to sneak away to Finn’s hut whenever possible. Hilary does everything he can to protect his secret life, even when it means hurting the one schoolmate who seems to like him. In his refuge from St. Oswald’s, he learns survival skills, and for the first time, the adult responsibilities that come with caring about someone else.

Precarious as the coastline itself, Hilary’s fantasy world cannot last. His lies to teachers and students eventually catch up with him. The vast differences between Hilary and Finn—less perceptible in the hut than in the outside world—ultimately tear them apart.

Meg Rosoff’s third novel enchants readers with its lyrical prose, engaging storytelling, and profound insight. An astute observer of the human heart, Rosoff captures the rush and the cruelty of adolescent desire and the imprint it leaves on a person. What I Was is an unusual coming-of-age story that examines the fluidity of identity and the ways in which people consciously redefine themselves in the face of love.

Meg Rosoff was born in Boston and moved to London in 1989, where she lives now with her husband and daughter. Formerly a YA author, Meg has earned numerous prizes, including the highest American and British honors for YA fiction: the Michael L. Printz Award and the Carnegie Medal. A movie based on her first novel, How I Live Now, is in development with Passion Pictures.

“[A] beautifully crafted tale that seems, like its protagonist, both enduringly old and fluently new.” —Los Angeles Times

“This whole novel is built on a surprise…beyond the surprise lies the beauty of what it means to live without junk in your life, and the reminder that all of it—the junk and the beauty—will be gone in a twinkling. This is a lovely book.” —The Washington Post

“A richly patterned work about secrets…how an innocent crush can utterly change everything.” —People (four stars)

Hilary’s world at boarding school is confining, cold, and at times, brutal. Finn’s world, despite its physical dangers and harsh economic reality, seems liberating to Hilary. Is he romanticizing Finn’s life or is Finn’s life truly freer?

On first glimpse, Hilary is struck immediately by the mysterious figure of Finn on the beach and describes the vision as looking into the mirror at someone he’d always hoped to be. What does Finn represent to Hilary and how is it different from Hilary’s own image of himself? How are they similar?

As the older Hilary looks back on his life, he evokes an image of himself that is at once sharply insightful, darkly cynical, and, at times, naïve. What are some of his blind spots? What does he see as an adult that he could not see as a teenager?

The reader has little access to Finn’s thoughts throughout the novel. What do you think Finn gets out of his relationship with Hilary?

From Hilary’s perspective, formal schooling is mostly useless and serves only to cement students’ social status and privileges. Finn, on the other hand, is self-taught. What sort of education does Hilary get from his adventures with Finn?

Hilary often complains about the constant and needy presence of his schoolmate Reese. What is Reese’s role in this story? What, if anything, does he teach Hilary?

Hilary is interested in the history of the land and the book is strewn with descriptions of the changing coastline and tides. What is the significance of these passages? How does Hilary’s idea of history change over time?

At the book’s climax, Finn reveals that he’s not who Hilary thought he was. Was Hilary responsible for failing to see the real Finn? Would Hilary have been as infatuated with Finn had he known the truth all along?

Hilary is ultimately found not guilty of any crimes. Is he guilty of any moral offenses? Or are the events of the novel simply a result of him being confused and young?

Hilary is consumed with the desire to be Finn, and little-by-little he transforms himself in Finn’s image. To what extent is identity shaped by close relationships like these? Has Hilary’s identity changed by the end of the story?