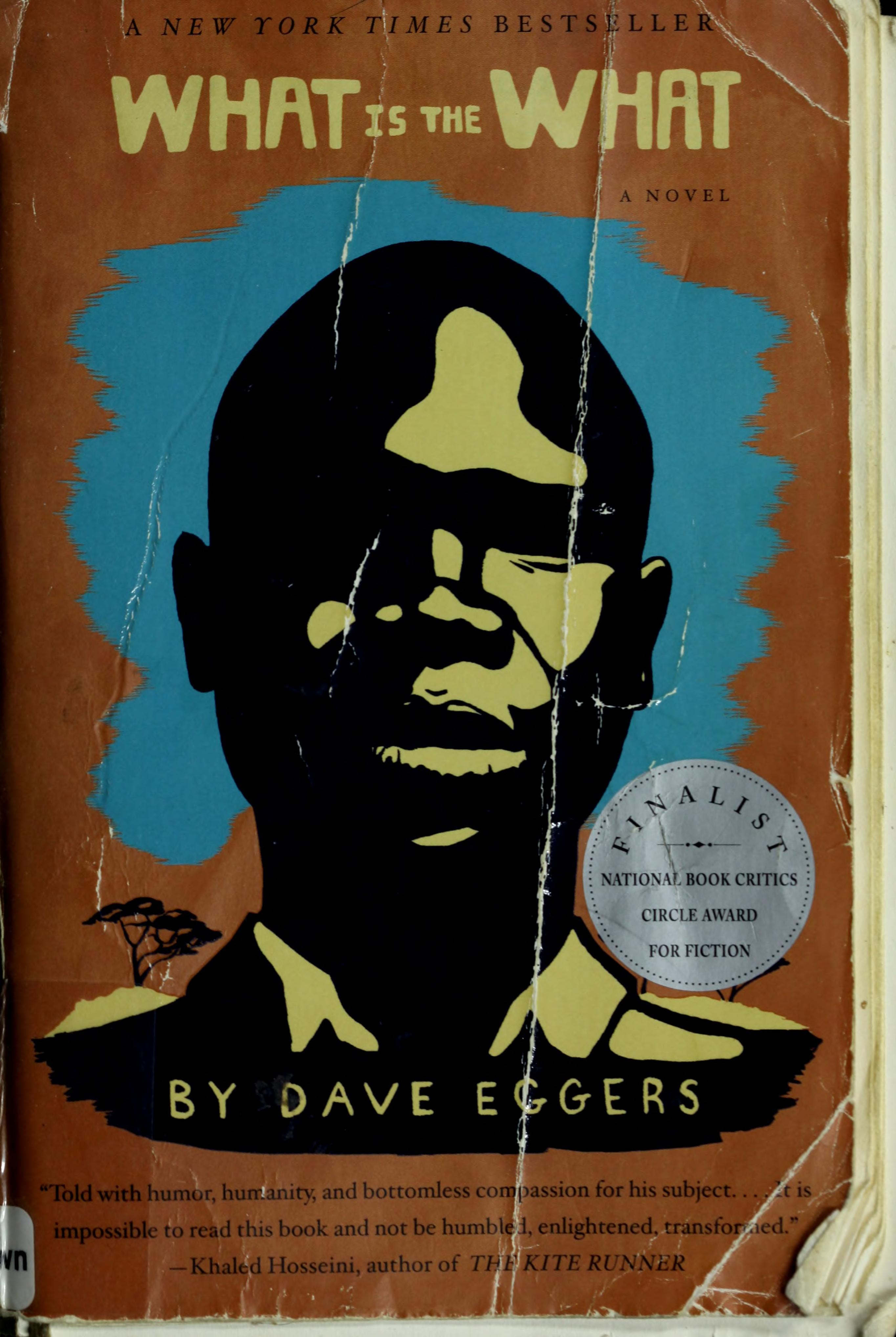 WHAT IS THE WHAT

What Is the What is the epic novel based on the life of Valentino Achak Deng who, along with thousands of other children —the so-called Lost Boys—was forced to leave his village in Sudan at the age of seven and trek hundreds of miles by foot, pursued by militias, government bombers, and wild animals, crossing the deserts of three countries to find freedom. When he finally is resettled in the United States,

What Is the What is the epic novel based on the life of Valentino Achak Deng who, along with thousands of other children —the so-called Lost Boys—was forced to leave his village in Sudan at the age of seven and trek hundreds of miles by foot, pursued by militias, government bombers, and wild animals, crossing the deserts of three countries to find freedom. When he finally is resettled in the United States, he finds a life full of promise, but also heartache and myriad new challenges. Moving, suspenseful, and unexpectedly funny, What Is the What is an astonishing novel that illuminates the lives of millions through one extraordinary man.

Dave Eggers grew up near Chicago and graduated from the University of Illinois at Urbana-Champaign. He is the founder of McSweeney’s, an independent publishing house in San Francisco that produces books, a quarterly journal of new writing (McSweeney’s Quarterly Concern), and a monthly magazine, The Believer. McSweeney’s publishes Voice of Witness, a nonprofit book series that uses oral history to illuminate human rights crises around the world. In 2002, he cofounded 826 Valencia, a nonprofit youth writing and tutoring center in San Francisco’s Mission District. Sister centers have since opened in seven other American cities under the umbrella of 826 National, and like-minded centers have opened in Dublin, London, Copenhagen, Stockholm, and Birmingham, Alabama, among other locations. His work has been nominated for the National Book Award, the Pulitzer Prize, and the National Book Critics Circle Award, and has won the Dayton Literary Peace Prize, France’s Prix Médicis, Germany’s Albatross Prize, the National Magazine Award, and the American Book Award. Eggers lives in Northern California with his family.

“[An] Astonishing story … of immerse power, emotion and even, in the midst of horror, beauty.” —Salman Rushdie

“Told with humor, humanity, and bottomless compassion for his subject. . . . It is impossible to read this book and not be humbled, enlightened, transformed.” —Khaled Hosseini, author of The Kite Runner

“Lit by lightning flashes of humor, wisdom and charm. . . . An extraordinary work of witness, and of art.” —Francine Prose, The New York Times Book Review

In what ways can What Is the What be understood as a hero’s journey? What features does it share with classic works like Homer’s Odyssey and Virgil’s Aeneid or more modern works like Richard Wright’s Black Boy and Cormac McCarthy’s The Road? What are the most significant features of Valentino’s journey? In what ways is Valentino’s story both unique and universal?

When he is in the United States, Valentino says that he wants everyone to hear his stories. “Written words are rare in small villages like mine, and it is my right and obligation to send my stories into the world, even if silently, even if utterly powerless” [p. 29]. Through Eggers, Valentino has found a way to send his stories into the world. Are they powerless to alter the suffering he and his fellow Sudanese have endured? What powers do they possess?

What are Valentino’s most appealing qualities—as a character in his own story and as a narrator of that story?

What is the significance of Valentino addressing his stories to people who aren’t listening—to Michael, TV Boy, to Julian, the intake person at the hospital, to members of his gym, etc.? Why would Eggers make this narrative choice?

Why is a personal story—Valentino’s story—of the violence and oppression in Sudan more valuable than any purely historical account could be? What emotions does Valentino’s story arouse that a more objective treatment could not?

What are Valentino’s most harrowing experiences? In what ways do they shape his character? What enables him to survive these ordeals and even excel in the refugee camps?

What is the “what” of the “What Is the What” story? Does the novel point to a solution to this riddle?

At the end of the novel, Valentino addresses the reader directly: “All the while I will know that you are there. How can I pretend that you do not exist? It would be almost as impossible as you pretending that I do not exist” [p. 535]. Why would Eggers and Valentino choose to end the novel in this way? In what ways have Westerners pretended that people like Valentino don’t exist? What is Valentino saying here about the power of the imagination and the power of storytelling?

In what ways does What Is the What illuminate the genocide that is still ongoing in Sudan?

Explore the irony of Valentino escaping from Africa and the terrible violence there to being beaten and robbed in Atlanta. Why does Valentino feel, after he has been victimized—and after his experience with the police and the hospital—that he doesn’t actually exist?

Valentino says that “the civil war became, to the world at large, too confusing to decipher, a mess of tribal conflicts with no clear heroes and villains” [p. 349]. To what degree is it true that there were no clear heroes and villains, no clear victims and oppressors, in Sudan’s civil war as Valentino describes it? In what ways do SPLA forces behave just as brutally as the murahaleen and government forces they are fighting?

When the Lost Boys are chased from a village by the SPLA, Valentino realizes that “there were castes within the displaced. And we occupied the lowest rung on the ladder. We were utterly dispensable to all—to the government, to the murahaleen, to the rebels, to the better-situated refugees” [p. 225]. What essential problem does Valentino’s realization reveal? Is this desire for hierarchy intrinsic to human nature or is it always historically conditioned?

What Is the What is about war and displacement and the struggle to survive. In what ways is it also a novel about friendship, love, and family? What moments of compassion stand out in the novel? What are Valentino’s most positive relationships?