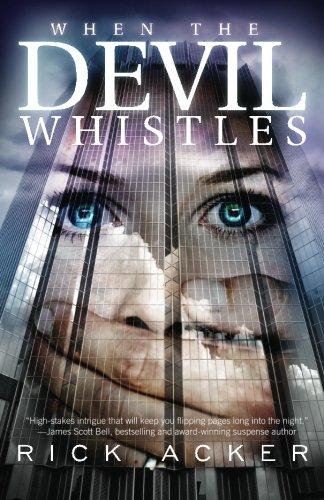 WHEN THE DEVIL WHISTLES

“I didn’t have a choice. I didn’t.” That’s what Allie Whitman tells herself every night as she lies awake. Sometimes she even believes it. But mostly she knows deep down that her inability to make a hard choice has put millions of lives at risk, including her own. Now the only one who can help her is her lawyer, Connor Norman. Unfortunately, Allie’s actions have destroyed Connor’s trust in her—and may destroy much, much more.

“I didn’t have a choice. I didn’t.” That’s what Allie Whitman tells herself every night as she lies awake. Sometimes she even believes it. But mostly she knows deep down that her inability to make a hard choice has put millions of lives at risk, including her own. Now the only one who can help her is her lawyer, Connor Norman. Unfortunately, Allie’s actions have destroyed Connor’s trust in her—and may destroy much, much more.

Rick Acker is a Deputy Attorney General in the California Department of Justice. He prosecutes corporate fraud lawsuits like those described in When the Devil Whistles. He has led confidential investigations into a number of large and sensitive cases that made headlines in and out of California. Rick holds law degrees from the University of Oslo and the University of Notre Dame, where he graduated with honors. In addition to his novels, he is a contributing author on two legal treatises published by the American Bar Association. Rick lives with his wife in the San Francisco area.

“Gripping, edge-of-your-seat fiction. When the Devil Whistles is a fast mix of suspense, compelling characters and legal intrigue as only Acker can write it. I dare you to try to put this book down.“
—Tosca Lee, author of Demon: A Memoir

“More than once while reading When the Devil Whistles, I had to remind myself that I wasn’t reading John Grisham. Rick Acker’s pacing and plot are terrific, and I found myself rooting for Allie and Connor even when they made mistakes. A wonderful read from a writer I wish I’d discovered sooner.”—Angela Hunt, author of Let Darkness Come

“High stakes intrigue that will keep you flipping pages long into the night.”—James Scott Bell

“Rick Acker has done it again! He’s become one of my favorite suspense novelists by the simple expedient of delivering the goods . . . in every book. This time, a federal whistle-blower may have blown her whistle one time too many. Is she in too deep this time? This book kept screaming my name every time I tried to put it down.”—Randy Ingermanson, Christy award winning author of Oxygen

A central theme in the book is how the characters react when they face hard choices. How did Allie respond? How did Connor?

Have you ever been in a situation where you were tempted to say that you didn’t have a choice when the truth was that you didn’t want to pay the price for making the right choice?

Late in the book, Connor refl ects that “by the time we reach a critical decision, we’ve already made it. Maybe all the little decisions in life are like bricks, and those bricks pile together into walls over time. And when some crisis comes, those walls force us along whatever path we’ve already chosen.” Do you agree or disagree? If you agree, will that affect how you make “little” choices in the future?

How does Allie change over the course of the book? What changes her?

How does Connor change? What changes him?

Was Allie’s father right to tell her to blame the crash on him? If you think he was wrong, do you blame him for doing it?

As described in the following Author’s Notes, the federal and state False Claims Acts allow whistleblowers to sue on behalf of the government and keep part of anything the government recovers. Had you heard of these laws before? If not, did their existence surprise you?

Advocates say that the False Claims Acts are important tools for fi ghting fraud. Opponents say they encourage frivolous lawsuits by disgruntled former employees. Who do you think is right?

Did you think Max Volusca was a good public servant? Why or why not?

Did Cho’s true allegiance surprise you? Before reading the Author’s Notes, were you aware of how much spying goes on between North and South Korea?

Early in the book, Connor says, “If you commit a crime, you should pay the price. Every. Single. Time. No excuses, no compromises.” Do you agree with that statement? Is it fair? Is it merciful?

Does Connor’s Christian faith aff ect his actions? Are there places where it should have aff ected them more?

Connor, like a lot of Northern California Christians, drinks alcohol. Did that bother you? Why or why not?