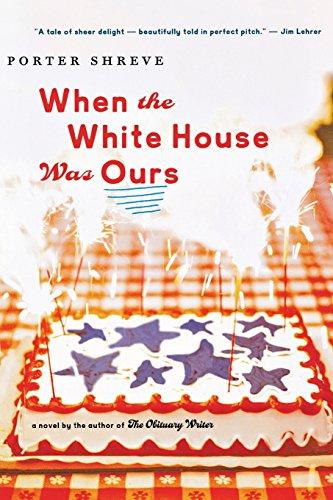 WHEN THE WHITE HOUSE WAS OURS

Amidst the uncertainty of the most controversial election in American history, presidential historian Daniel Truitt looks back at another tumultuous time, nearly twenty-five years before…. It’s 1976 and while the country prepares to celebrate the bicentennial Daniel’s family is falling apart. His father, Pete, has been fired from yet another teaching job, and his mother, Valerie, is one step away from packing up the van and leaving for good. But when Pete convinces a wealthy old friend and rival to lend him a crumbling mansion in Washington, DC, mere blocks from the White House, he makes a bold plan: to move east and start a democratic school under his own roof,

Amidst the uncertainty of the most controversial election in American history, presidential historian Daniel Truitt looks back at another tumultuous time, nearly twenty-five years before…. It’s 1976 and while the country prepares to celebrate the bicentennial Daniel’s family is falling apart. His father, Pete, has been fired from yet another teaching job, and his mother, Valerie, is one step away from packing up the van and leaving for good. But when Pete convinces a wealthy old friend and rival to lend him a crumbling mansion in Washington, DC, mere blocks from the White House, he makes a bold plan: to move east and start a democratic school under his own roof, where students and teachers are equals. When the White House Was Ours is a story about a family’s struggle to stay together and pursue a dream against all odds, and a nostalgic reflection on a time when the White House was in the hands, however briefly, of idealists.

Porter Shreve is the author of The Obituary Writer which was a finalist for the Great Lakes Booksellers Award and for the Society of Midland Authors Book of the Year. It was also a NY Times Notable Book. He is also the author of Drives Like a Dream, which was a Chicago Tribune Book Best of the Year selection. Shreve is co-editor of three anthologies: Tales Out of School, How We Want to Live, and Outside the Law. Mr. Shreve has taught at the University of Michigan (where he received his M.F.A.) and is now an Associate Professor at Purdue University. He divides his time between West Lafayette, Indiana and Chicago, Illinois and is married to the writer Bich Minh Nguyen.

“When the White House Was Ours is as good as it gets. Porter Shreve tells the story of the Truitts, a most unusual displaced family who come to Washington, DC from the Midwest to start an alternative school in a white house. They arrive about the same time Jimmy Carter, the man from Plains, comes to another White House with a credo about trust. The end result is a tale of sheer delight—beautifully told in perfect pitch.” —Jim Lehrer, Host of “The NewsHour with Jim Lehrer” and author of Eureka and The Last Debate

“Porter Shreve does what few writers can — he casts a spell, bringing you immediately and completely into a world you won’t soon want to leave. This is a humane, tender and intimate story about what it means to be a famliy, to be idealistic in an all too pragmatic world.” —Joe McGinnis Jr., author of The Delivery Man

“Porter Shreve has always had a keen feel for a story and an instinct for what is interesting in the world. He is a wonderful and accomplished young writer.” —Lorrie Moore, author of Birds of America

The narrator of When the White House Was Ours is a 12-year-old boy. What makes Daniel a good choice to tell the story?

How are the adult Daniel and the 12-year-old Daniel similar or different? Why is Daniel’s experience at Our House still so important to him, nearly twenty-five years later?

For the first several months after his family arrives in Washington, Daniel plays the role of his father’s right hand man. Why is he so eager to please and protect his father?

The arrival of the hippies Tino, Cinnamon and Linc marks a turning point in the story. To what extent do they help or hurt the cause of the school? In what ways are they representative of the successes and failures of the 1960’s as a cultural phenomenon?

Early in the novel Val tells her husband, “This was your idea” and seems as if she’d rather wait and watch than help bail Pete out of trouble. But soon she becomes active in trying to help the school succeed. What changes in Val? Ultimately does she get what she wants or is she left to compromise?

One of the earliest students to enroll in the school had at first been a robbery suspect. What is Quinn’s role in the story? In what ways is he similar to certain other characters? What do you make of his obsession with flying machines, both literally and metaphorically?

Quinn’s entrance is dramatic, but it’s not the first scene in which theft is a focal point. In fact, the book is full of acts of theft. List some of these over the course of the novel. What do you make of all the stealing? Did you find yourself rooting for the thieves?

Another important secondary character is Bailey Dornan’s daughter, Cleo. Were you as surprised as Daniel was when she began to pay special attention to him? What does Cleo see in Daniel and vice-versa? How does their growing friendship drive the plot?

Adams and Thomas Jefferson, he has the thought that “the story of these Founding Fathers resembled the rivalry between Cleo’s father and my own.” In what ways does the presidential history that Daniel collects mirror the goings-on at Our House? What were some of your favorite presidential tidbits?

Interpret the title When the White House Was Ours. How many White Houses or white houses does the title refer to? To what extent is the novel a story of the 1970s or a story of our own time?

On various occasions throughout the novel, Daniel hears “a faint clicking in the walls and a rustling sound that seemed to rise up slowly from the foundation of our house,” and he begins to worry that the place is haunted. Is the house haunted, either literally or metaphorically? If so, who are the ghosts?

Pete did his masters thesis on democratic education, “where students and faculty have equal say.” In what ways does the Our House democratic experiment succeed and in what ways does it fail? What are the plusses and minuses of a school that asks its students to “Act first. Ask permission later”?

What do you make of Pete’s decision to make an example of Daniel by locking him in jail? Was Pete justified in doing this? How does this act mark a turning point in the story and in Daniel’s relationship with his father?

In the section “Our School” each chapter is headed with a class subject. Did you believe that the faculty was genuinely attempting to educate the students, or did you feel, as Daniel says about his father that “our school assignment was just a home improvement project in disguise. My father would never admit it, but necessity had pushed him to be more like Abbie Hoffman every day”?

In the Prologue, were you surprised by the fates of any of the characters? After you’d turned the last page, did you come away feeling that the novel was funny or sad?