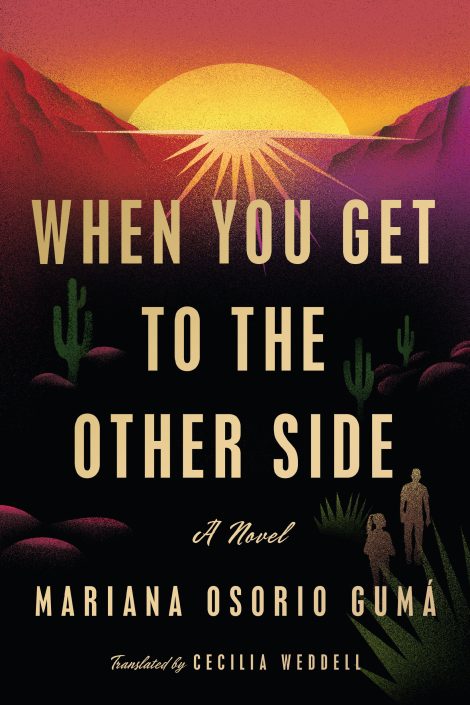 WHEN YOU GET TO THE OTHER SIDE

Twelve-year-old Emilia and fifteen-year-old Gregorio spend their childhood following their tenacious grandmother, Mamá Lochi, through the oak- and jocote-filled mountains of Amatlán, México–gathering herbs for the folk remedies Mamá Lochi makes, listening to her awe-inspiring stories about becoming a curandera, and learning how to connect with the supernatural world themselves. But, when she passes away they’re left alone, with their father hundreds of miles north in the U.S. So they scrape together all their money, and pay coyotes to smuggle them to the other side.

The siblings are exhausted and famished before they even make it to the border, and they fall into only more danger after crossing. After the predatory coyotes separate Emilia from Gregorio–having their own plans for the young girl–the siblings struggle through the parching desert, and a human trafficking operation hidden within it, to make their way back to each other. They draw strength from their profound bond as well as the supernatural abilities their grandmother helped them hone, such as catching glimpses of the future and hiding to the point of invisibility. Their efforts are interwoven with flashbacks to Mamá Lochi herself, whose tales of the mystical journey she took to become a curandera teaches the siblings how insubstantial and blurred the imagined borders between past and future, self and other, and life and death truly are–preparing them, as much as anything could, to experience all these spaces on their own journey. 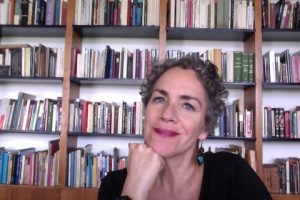 Mariana Osorio Gumá is a psychoanalyst and writer. She has published seven books of fiction in Spanish, three of which have been selected by the International Board on Books for Young People for their high quality. In 2014, she was awarded the Premio Literario Lipp La brasserie for her novel Tal vez vuelvan los pájaros. Born in Havana, Cuba, in 1967, she has lived in Mexico since 1973. 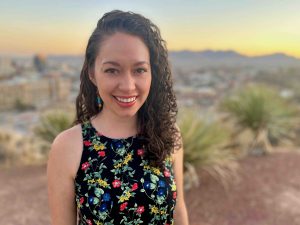 Cecilia Weddell is a writer, editor, and translator. She has a Ph.D. in Editorial Studies from Boston University, where she translated the newspaper essays of Rosario Castellanos and earned a graduate certificate in Latin American Studies. Her translations from Spanish have been published in journals including World Literature Today, Latin American Literature Today, and Literary Imagination. An associate editor at Harvard Review, she is from El Paso, TX.

“A moving story of migration that tempers the pain and loss of a journey to the US with rich lyricism and magical realism. Timely, vivid, and uncompromisingly authentic, When You Get to the Other Side reminds us with unflinching honesty that meaning and joy must be sought in this moment, where we are. The promised land is “right here,” among the spirits of ancestors, of rock and soil, ready to be fashioned with our hearts and hands.” — David Bowles, award-winning author and co-founder of #DignidadLiteraria

1. How does Mamá Lochi transform a trauma in her life (being struck by lightning) and turn it into an asset, or superpower, for herself and grandchildren?

2. What does Mamá Lochi teach Emilia and Gregorio about respecting the natural world and spirits?

3. What stands out to you about the relationship between Emilia and Gregorio?

5. What does home mean to Emilia and Gregorio? How does their definition of home evolve from the beginning to end of the story?

6. What does the title When You Get to the Other Side mean to you after reading? Why do you think the author chose this particular title? Which border do you think this title refers to? Why?

7. The main narrative is interwoven with flashbacks of Mamá Lochi. How does this impact your reading of the story? Why do you think the author decided to present the story this way rather than chronologically?

9. Emilia and Gregorio draw supernatural abilities and strength from their relationship with their abuela, their connection to the natural world, and their culture. How do these sources help them deal with situations that are scary or difficult?

10. Describe the multiple borders presented in the book that multiple characters face and cross.

The morning that they left Amatlán in the bed of a pickup truck, in the hours between darkness and daybreak, the world became immense and noisy. Emilia Ventura shut her eyes and inhaled deeply, bringing in the fresh air of her homeland. She wanted to hold onto it. Let it go down into the depths of her soul, wrapped securely in the mist of daybreak. All it would take was a search through the corners of her mind for the mountain to return, all at once, complete with its colors, its crickets and chachalaca birds, and its smell of rain. At twelve years old, she already sensed the unbridgeable measure of time that would have to pass before she could recover even a piece of the world she’d grown up in.

As the truck passed by, dogs from the nearby villages ran and barked after it. They wanted to catch up to the monster with ten heads and four wide, round feet that traveled down the road. Heads of silent and preoccupied travelers, immersed in their sense of loss and longing. The leaves of the jocote trees were already behind them when Emilia and Gregorio Ventura felt the eyes full of questions, advice, and warnings on them. Wondering if the boy, with his crooked foot, would be able to handle the relentless marching that lay ahead. If the girl, so young and green, could escape all the vermin lurking along the way. One of the men piped up and asked if someone was meeting them before the crossing. If anyone was waiting for them on the other side. If they knew how to take care of themselves. If this, if that.

“Yes, sir,” Gregorio jumped in, exasperated. “They’re waiting for us right up ahead. Right, Calandria?” And he threw his sister a conspiratorial glance.

A row of adobe houses gave way to cinder block constructions—soulless grays with the debris of old junk and trash gathered wherever you looked. The truck shook as it crept forward. And even still, Emilia Ventura dozed off for a couple hours, until the sun beat down on the back of her neck. They finally stopped in a village populated by busted-up sheet metal structures, dirt, and balding trees in pastures drier than a dead animal’s loin.

“I’ll be back right now—gonna look for the guy takin’ you through the next part,” said their driver, a sour-faced young man named Darío, and he disappeared down a path.

The travelers stepped down. The men went off to pee. The women did what they could farther off, out of sight, covering for each other. Then they all stood next to the car, just off to the side since nobody dared to go more than a few steps away. A few meters from them there was a row of a half-dozen houses made from sheet metal and concrete. A while later another truck arrived, carrying about twenty people. A coming and going of people at wait. They wandered back and forth with their backpacks still on, or they splayed out on the dry and dusty grass, chewing, drinking, talking.

An abrupt wind brought in a dust storm: wrappers, litter, dry leaves. Straw hats and baseball caps went flying, thoughts got scrambled in the air. It felt like a whirlwind that brought with it a secret message from a parallel universe. Emilia looked at her brother.

“What’re you lookin’ at me for, Calandria,” he asked, then felt a tenderness as he inspected the bright and questioning eyes of his little sister. The freshness of her curiosity. He too recognized there was an omen in the dust storm.

“Nothin’, Caco,” Emilia said with a shake of her head as she followed the dust with her eyes.

The strong winds of her hometown swirled into her thoughts—the way they came during the dry season, lifting dust and dirt and whatever else they found in their path. So strong that the trees’ branches would crackle and the electric cables would swing from side to side until they broke free of their posts and left the town in darkness. The wind would whir through the spaces between rocks and produce a whimper like a suffering animal, making even the toughest people’s skin crawl. Emilia remembered how, after all that, something unexpected would happen. They’d find money or hear of the sudden death of an acquaintance or get news of someone falling off a cliff or someone else drowning in the deepest part of the river. Or it could be an unannounced circus, or a fair, or a bullring popping up in the central plaza. And then their father, who almost never spent time with them, would hurry them to get dolled up in their nicest rags and take them to see the animals and the acrobats at the circus or to stroll through the fair and go on the rides. Or he’d buy tickets to get a glimpse of the brave riders who managed to stay on a bucking bull.

There was no way to know if the dust storm would bring something good or bad. They just knew that there was no mistaking it: the windstorms always announced the arrival of something new. The dust devil surrounding them didn’t last longer than a minute. Gregorio lowered his head and drew circles in the dirt with the toe of his sneaker—that’s what he did whenever the disorder of his soul overwhelmed him. Finally they saw Darío on his way back. He was talking to an obese man who had a scar on one cheek. The man’s eyes, dark as a capulín cherry, looked over each traveler one by one. He paused when they landed on Emilia, and she turned her face the other way.