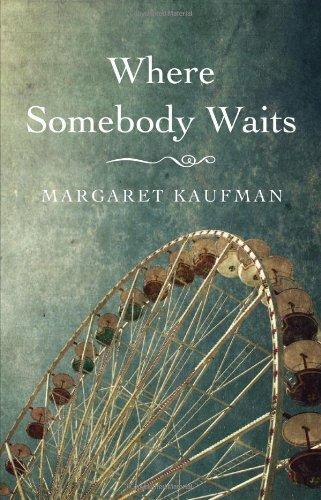 Where Somebody Waits instantly transports you to small-town Arkansas more than a half-century ago—a world of catfish and bourbon-and-Coke; of tent revival meetings and less boisterous discussions about heaven and hell; of finding love or just dreaming about it. A neighborly community, but with its share of intrigues.

And instantly you’re under the spell of Ruby Davidson, the magnetic central character of Where Somebody Waits. Self-assured, kind, always willing to take a stand for people less fortunate,

Where Somebody Waits instantly transports you to small-town Arkansas more than a half-century ago—a world of catfish and bourbon-and-Coke; of tent revival meetings and less boisterous discussions about heaven and hell; of finding love or just dreaming about it. A neighborly community, but with its share of intrigues.

And instantly you’re under the spell of Ruby Davidson, the magnetic central character of Where Somebody Waits. Self-assured, kind, always willing to take a stand for people less fortunate, at “five foot ten inches, with masses of red hair and a pompadour that increases her stature to six feet,” she’s also strikingly beautiful. Ruby loves her husband, adores her nephews and nieces, and more or less dutifully respects the tightly knit Jewish family into which she has married. Her life is filled with triumphs and failings, joy and sadness, lived with all possible grace, and told in a spirit of admirable and honest reflection.

A full life, yes, but not an untroubled one, because Ruby also still loves her high-school sweetheart. How she comes to terms with this old, old conundrum and how it affects the lives of everyone around her shape the heart of Where Somebody Waits.

Margaret Kaufman has written five books of poetry. A resident of Kentfield, California, she leads poetry workshops, teaches at the Fromm Institute at the University of San Francisco, and edits both fiction and poetry. Where Somebody Waits is Kaufman’s first book of fiction.

“In the madcap, outspoken, yet hauntingly vulnerable Ruby, Kaufman has created an indelible character, one whose full life arc is succinctly yet voluptuously rendered through the incandescent vignettes of Kaufman’s masterful first novel-in-stories.”—Booklist

“Margaret Kaufman’s Where Somebody Waits is a work of quiet humanity. The central figure, Ruby, marries into a Jewish Arkansas family, and we move with her and a network of her relations across a period of some sixty years, from World War II through to the near-present. Ruby’s character is a life-force with an innate sense of social justice and an unusual ability to love. A great deal is covered in Where Somebody Waits, but without padding or digression. Think a less melancholic Barbara Pym transported to the American South, or a Willa Cather shorn of her frontier and her emotional aloofness. But, then—don’t. Kaufman is an inimitable voice. You will be both soothed and transported by her delightful stories.”—Paula Marantz Cohen

“‘Vinegar, cornbread and butter,’ a character reminisces in Where Somebody Waits. ‘The music of it.’ Margaret Kaufman has captured those flavors and textures in a novel that may look like a miniature but is actually a chorus of voices that opens up a world rich with color and feeling. Her ear is wonderfully tuned to the undercurrents and ironies, the passions and dailyness of small-town life across time and change, and at the center, her salty, peppery Ruby is as strong as she is alluring—faithful and faithless and full of surprises.”—Rosellen Brown

“Her attention to the nuances of the natural world and to the quiet oscillations in the lives of her speakers is both exemplary and heartbreaking. Her exquisite sense of measure and restraint make her reckonings of the complex junctures of our lives all the more compelling and powerful as she quilts together her many fabrics of human celebration.”—David St. John

1. In the very first story, “Fishing,” we learn that Ruby already drinks pretty heavily at the age of 19, and her drinking is alluded to often thereafter. How does her drinking affect her life?

2. Most of what we learn about Ruby we learn from her or from observing her in these stories. What do we learn about Ruby from other characters when Ruby is not around, e.g., from Molly in “Ruby’s Gift” and “Lifesaving Lessons,” or from John Clay in “Sugar Dust”?

3. The song lyric says, “No one here can love and understand me.” Everybody seems to love Ruby; who, if anyone, really understands her?

4. Is it a coincidence that John Clay’s last name is “Ferris” and that Ruby chooses the image of a Ferris wheel to describe what love is?

5. The issue of Bubba’s being Jewish seems always to be in the background of the stories but never much in the foreground. In “Ducks,” what prompts Miss Sissie to suggest that Ruby change her name to “Ruth” because “she had earned it”?

6. Is Ruby happier when she’s juggling two men, John Clay and Bubba, or after she breaks it off with John Clay?

7. If Ruby and Bubba had had children, what kind of a mother would Ruby have been? Would she and Bubba have been happier having a family?

8. What meaning does the making of the quilt hold for Ruby?

9. How does Ruby compare to other characters in fiction who find themselves “out of their element”?

10. The setting is Arkansas. How does that affect the stories? Would it have been different if set in a small town in a different part of the South? In another part of the country?