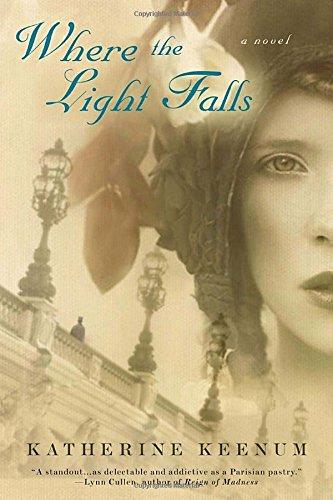 WHERE THE LIGHT FALLS

As the Belle Epoque dawns, Paris attracts artists from everywhere. One is Jeanette Palmer, daughter of a prominent Ohio family, who has left Vassar College under a cloud of scandal.

Amid the city’s great bohemian neighborhoods and teaching studios, Jeanette befriends other female artists, as well as an American Civil War veteran named Edward Murer. She begins to achieve a level of artistic success. And her happiness increases as she and Edward grow more intimate with each other.

But Edward is plagued by his demons and addicted to laudanum—and as the world opens its arms to Jeanette,

As the Belle Epoque dawns, Paris attracts artists from everywhere. One is Jeanette Palmer, daughter of a prominent Ohio family, who has left Vassar College under a cloud of scandal.

Amid the city’s great bohemian neighborhoods and teaching studios, Jeanette befriends other female artists, as well as an American Civil War veteran named Edward Murer. She begins to achieve a level of artistic success. And her happiness increases as she and Edward grow more intimate with each other.

But Edward is plagued by his demons and addicted to laudanum—and as the world opens its arms to Jeanette, and the society around her is transformed by cultural and scientific innovations, she must resolve a conflict utterly new to so many women: the choice between ambition and love.

Katherine Keenum holds a Ph.D in Medieval Studies from the University of Texas. She is a former editor of the Publications Program for the Council on East Asian Studies at Harvard University and has also taught writing at Yale. She lives with her husband in Worcester, Massachusetts. Where the Light Falls is her debut novel.

“Keenum’s deft handling of details makes Where the Light Falls a standout…As delectable and addictive as a Parisian pastry, the book is an art-lover’s delight.”—Lynn Cullen, author of The Creation of Eve

Discuss the role that women play in society during the late nineteenth century. What are the major differences between American and European views of women in the working world? What do colleges in the 1870s prepare girls for? What opportunities await young women after graduation?

Which characters have the most to lose or to gain from as a result of their reputations? What influence can a rumor, regardless of its legitimacy, have on the life of a person living in the United States and France in the late nineteenth century? What actions can be taken to stifle such gossip? Is it easier for men or women to escape the shadow of scandal?

Discuss the impact that war and death have on several of the characters in this book. How does nineteenth-century society view veterans and widowers? Do their shared experiences unite or divide them? What can we ascertain about Edward’s character from his feelings for his long lost love Marie? What do we learn about Carolus-Duran from his tale about Falguiére the sculptor? What does the story of Polycarpus tell us about Cousin Effie? Are there other stories of fallen or deceased friends and lovers that reveal insights into each person’s character?

Family plays a crucial role in this story. How would you describe the environment within the homes of the Dolsons, the Hendricks, the Murers, and the Palmers? Do these families support one another? Why or why not? What are the benefits of lineage in the 1870s and is it necessary to succeed in this society?

Edward Murer, Emily Dolson, and Charlie Post all struggle with their own addictions throughout this story. How do these dependence issues change the course of their lives? How do their friends and family eliminate or enable these habits? What societal pressures can be attributed to each character’s substance struggles? Are there any other characters that exhibit signs of abuse?

Professor van Ingen, William-Adolphe Bouguereau, and Carolus-Duran are among the many teachers that Jeanette studies with during her artistic journey. However, she meets several other mentors that help her develop both professionally and personally. Who do you feel she learns most from and why? What important lessons does this individual teach her and how does it impact her life?

M. Duran advises his students to “study where the light falls and where the shadows lie.” Discuss how this quote can be interpreted beyond the walls of the studio and into each character’s personal life. Which acquaintances and or experiences would be considered light and which would be categorized as shadows? Do you feel each person correctly distinguishes between the two by the end of the novel and, if so, how?

After Edward sells his drugstore, we learn that “something would have to replace” his activities there, “or his demons would rip at him again.” What fills this void in his life? Is this a conscious decision or is he guided toward it? Who helps him solve this dilemma? If the visual arts are Jeanette’s true passion, what is Edward’s?

Jeanette, Effie, and several other women enter into conversations about love versus work. They advise Miss Palmer that she will need to make up her mind where she will “see the gleam—in Dr. Murer or [her] work.” Do you believe that it is possible for artists to fall in love? What, if anything, does Jeanette eventually sacrifice for love? Which other women in this story must sacrifice a passion or profession for love? Is this an antiquated idea left in the nineteenth century or is does it still occur today?

Compare and contrast the dating rituals of nineteenth- and twenty-first-century life. Which method of courtship do you believe best leads to love, friendship or both? What behaviors from 1870s romance have withstood the test of time? Which turn-of-the-century formalities would you like to see revived? How do the opinions of peers affect relationships in both periods? What role does family play in a couple’s development and how has it changed over the years?

Why do you believe Edward engaged in relations with the prostitute on Boulevard Saint-Germain? During one of his consultations, Dr. Aubanel absolves Edward for the act of desire, but insists that he keep this error of judgment from Jeanette. Do you agree with this piece of advice? What other parts of his life do you feel should remain a secret? Does Jeanette keep any secrets from Edward? What other characters are masked by secrecy?

How do the couples in this story measure up to one another? What does each partner contribute to his or her respective pairing? Which of these couples are unbalanced in terms of power and respect? Which couple do you feel is married for convenience and which is married for love? How does marriage help or hurt individuals during the nineteenth century?

How do Robbie Dolson and Noggins change Jeanette’s view of commercial art? What do Jeanette’s peers think of her work appearing in publications? What do these published works do to Jeanette’s reputation as an artist? Have Robbie Dolson’s actions improved or impaired Jeanette’s future career? Explain.

While Jeanette and Edward find each other in Paris, Cousin Effie finds herself. What events help her develop personally? Which characters is she most inspired by? What is Effie’s dream and how does she achieve it? Do you think she will ever return to the United States and, if so, what can a future in America offer her? What does her Parisian outlook look like?

Sonja describes the nineteenth century as “so nervous, so full of change and quickness.” What social, technological, and artistic changes are happening throughout this story? How do these additions of modernity alter the lives of each character? What are the most influential changes? Which of the characters display signs of apprehension towards them, and why? Which characters embrace these revolutionary ideas and inventions? What are their motives?