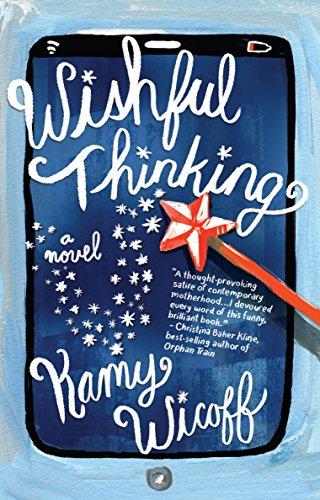 A modern-day fairy tale in which one woman learns to overcome the challenges and appreciate the joys—of living life in real time. Kamy Wicoff’s debut novel, Wishful Thinking, is a thoughtful reflection on contemporary parenthood delivered in a funny, fast-paced package for women on the run. Set in the world of pickup, play dates, FaceTime and overtime, and wittily parodying the fantasy that smartphones are the answer to all life’s challenges, Wishful Thinking is the perfect novel for working parents today.

A modern-day fairy tale in which one woman learns to overcome the challenges and appreciate the joys—of living life in real time. Kamy Wicoff’s debut novel, Wishful Thinking, is a thoughtful reflection on contemporary parenthood delivered in a funny, fast-paced package for women on the run. Set in the world of pickup, play dates, FaceTime and overtime, and wittily parodying the fantasy that smartphones are the answer to all life’s challenges, Wishful Thinking is the perfect novel for working parents today.

Kamy Wicoff is the co founder of SheWrites.com, the world’s largest online community for women who write, and co founder, with publisher Brooke Warner, of She Writes Press. SheWrites.com and SheWrites Press were acquired in 2014 and are now part of the SparkPoint Studio family. Wicoff’s first book, the best-selling I Do but I Don’t: Why the Way We Marry Matters, was published by Da Capo Press in 2006. Her work has appeared in Salon.com, and has been anthologized in Why I’m Still Married: Women Write Their Hearts Out on Love, Loss, Sex, and Who Does The Dishes (Hudson Street Press, 2006), and About Face: Women Write About What They See When They Look in the Mirror (Seal Press, 2008). She serves on the board of Girls Write Now, a mentoring organization in New York City, and also formerly served on the Advisory Council for Stanford University’s Clayman Institute for Gender Research. Wicoff lives in Brooklyn with her sons, Max and Jed.

“Wishful Thinking is funny, tender, perceptive- I tore through it with delight.”

“A thought-provoking, gimlet-eyed satire of contemporary motherhood in the guise of a romantic comedy, Wishful Thinking is a Trojan horse of a novel, delivering incisive social commentary while it entertains and delights you. I devoured every word of this funny, brilliant book.”

“Wishful Thinking is a whimsical, time-bending tale about an overextended, working single mother’s Year of Magical Living. The solution handed to Jennifer is both fanciful and practical. Who wouldn't want extra hours added to each day? If only!” —Hope Edelman, The Possibility of Everything

“Anyone who has ever longed for more hours in a day will see themselves in Kamy Wicoff’s warm, funny and spot-on novel. Wishful Thinking is both an engaging modern fairy tale and a wry and wise critique of the impossible, time-sucking pressures that shape our modern lives.”

—Brigid Schulte, author of the New York Times bestselling Overwhelmed: Work, Love & Play when No one has the Time, and Washington Post staff writer

At the beginning of the book, Jennifer says that when she was a girl, she dreamed of being two people when she grew up: a stay-at-home mom and the president of the United States. Now that she is grown up and trying to balance her life as a working mother, she feels the need to be multiple people more than ever. How much pressure do you think Jennifer is putting on herself, and how much pressure is she getting from the outside world?

When Jennifer realizes she has lost her phone, a deep dread and prickling panic overtake her (later she discovers there is a word for the fear of being separated from your phone: nomophobia), but a part of her feels liberated from her “digital ball and chain.” How do you think these dueling feelings play out over the course of the book, and what do you think the author is saying about the way people use smartphones in modern life?

Early in the book, Jennifer relates that her new boss, Bill Truitt, came to city government on a mission to impose what he calls a “private-sector work ethic” on her department, including longer hours and more emphasis on in-office “face time.” To Jennifer, this means not only making the fact that she is a single mother all but invisible when she is at work, it means being expected to work as though she has a wife—“the kind of wife even husbands don’t have anymore.” How does Bill’s notion of the “ideal worker” impact Jennifer and Alicia? Tim? How would it affect a man working for Bill who had children and a wife who also worked?

On page 27, Jennifer composes a “somewhere there is a woman” e-mail to her best friend Vinita. The theme of these e-mails and texts between the two friends is the mythical woman who has, and does, it all, whose perfect life (as advertised on Facebook) haunts them. Where do you think Jennifer and Vinita get their standards for what makes a “successful” woman? How do those standards affect the way they evaluate their own lives?

5. When Jennifer opens the app, she sees the tagline An App for Women Who Need to Be in More Than One Place at the Same Time, and describes it as the most alluring tagline she has ever seen in her life. Not believing the app is real, she books an appointment to go to her older son Julien’s guitar recital, something she was otherwise going to miss. What would your first Wishful Thinking appointment be? How many times could you have used the app in the last twenty-four hours?

Jennifer’s ex-husband, Norman, all but abandoned her and their two boys in the years immediately following their divorce. Now he is back and asking for 50 percent custody, a request that outrages Jennifer. In what ways do you think Jennifer is right in her response to Norman’s request? In what ways is she wrong?

Why do you think Dr. Sexton decides to give Jennifer the app?

Jennifer is thrilled to pick her boys up from school, but by six o’clock, cleaning her apartment is more appealing than continuing to play with them. Jennifer is aware of this paradox: sometimes the idea of being with her children is better than the actual experience of it. If you are a parent, have you ever felt this? If not, have you observed a similar paradox in other parts of your life?

How does Norman’s falling in love with someone else affect Jennifer? Are Jennifer’s children the emotional center of her life? How does that affect her and her boys?

In Chapter 13, Dr. Sexton relates her story to Jennifer, including the reason she is no longer affiliated with a university—a professor at the university she left suggested that women were unable to compete with male scientists because their interest in childbearing during the years physicists typically peak (early twenties) was a hindrance to them. This incident is fictional, but in 2005, then-Harvard president Lawrence Summers suggested that there were fewer women in science because a) fewer women were willing to put in eighty-hour workweeks; and b) there are innate differences between women and men that affect scientific ability. How do you think other characters in the book—Bill, Vinita, Susan, and Jennifer—would react to these kinds of arguments?

Jennifer and Vinita have been best friends since college. But in recent years, Vinita’s marriage to a wealthy investment banker, in stark contrast to Jennifer’s marriage to a struggling actor, has created a gap between them that neither has ever explicitly talked about. At Jennifer’s surprise party, however, when Vinita angrily confronts Jennifer about her use of the app, it comes out: Jennifer doesn’t feel Vinita’s experiences with “juggling” work and family can be compared with her own because Vinita has so much money, and so much help. Is this fair?

When Alicia discovers Jennifer is using the app, Jennifer tries to excuse her behavior partly by suggesting the app could help the women in the public-housing projects they serve—a suggestion that outrages Alicia. “[Your idea is] to throw a bunch of poor women through a wormhole every day so they can take care of their children and collect their welfare checks at the same time? Time travel is easier than passing affordable child care?” Upon hearing this, Jennifer, stung, reflects that she has always hated the “every-person-for-herself” attitude that isolates and blames so many of the public-housing residents she works with, and yet she has just suggested that in order to address the multiplying burdens they face, single mothers should multiply themselves. When the demands placed on you, at work or at home, seem too much, is your first instinct to blame yourself? Or to challenge the system that produces those demands?

When Jennifer is contemplating the effect the app has had on her life, she asks herself: when you can do anything all the time, what does anything you do mean anymore? To what extent do the choices people make about work, life, and love, and how much time to invest in them, have meaning because choosing one thing inevitably means sacrificing something else? Are Jennifer, Alicia, Vinita, and Dr. Sexton equally free to “choose” between career and nurturing relationships, for example, or is the degree of choice each woman has dependent upon her circumstances?