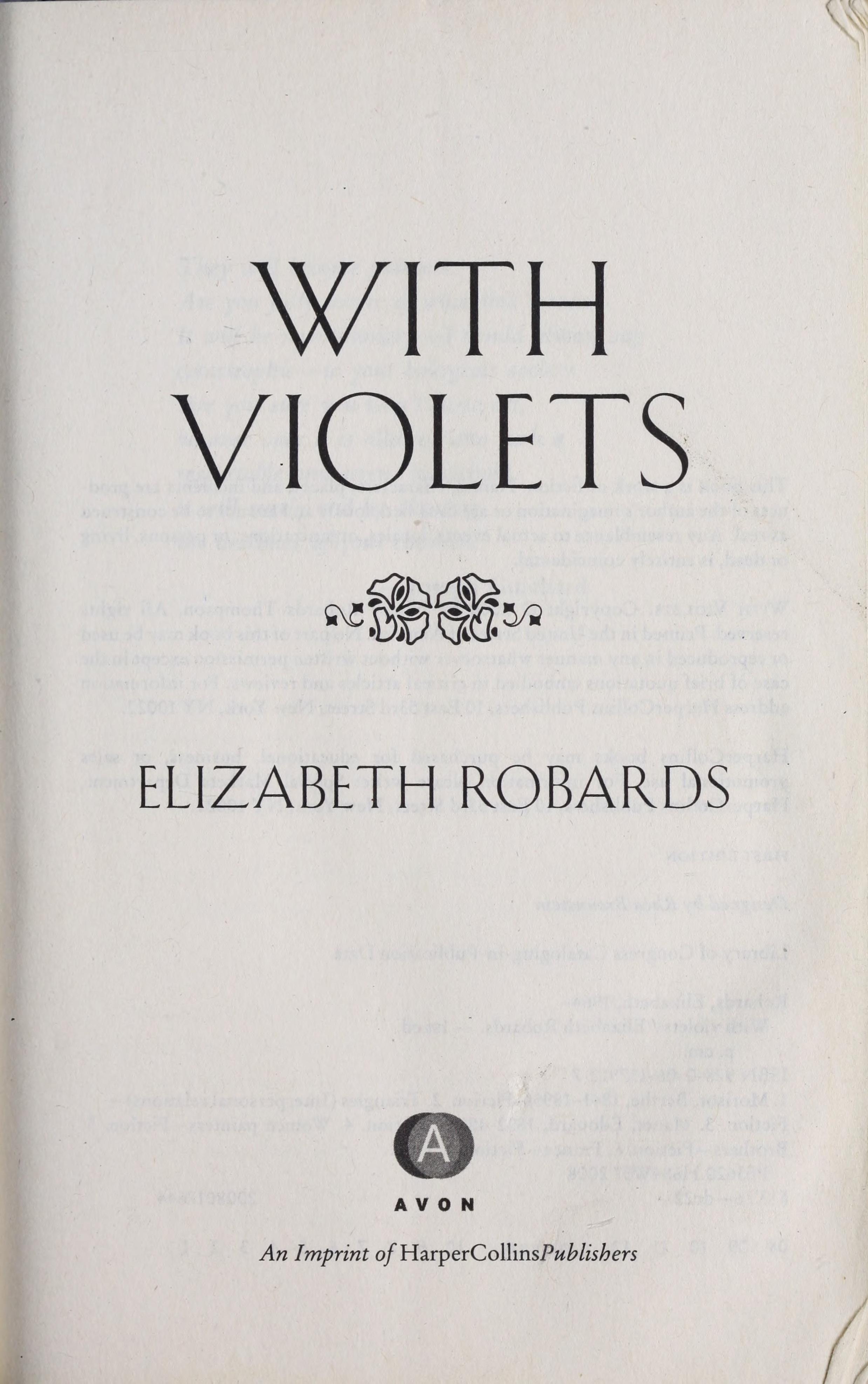 ;Paris in the 1860s: a magnificent time of expression, where brilliant young artists rebel against the stodginess of the past to freely explore new styles of creating—and bold new ways of living.

Passionate, beautiful, and utterly devoted to her art, Berthe Morisot is determined to be recognized as an important painter. But as a woman, she finds herself sometimes overlooked in favor of her male counterparts—Monet, Pissarro, Degas.

And there is one great artist among them who captivates young Berthe like none other: the celebrated genius Édouard Manet. A mesmerizing, breathtaking rogue—a shameless roué, undeterred and irresistible—his life is a wildly overgrown garden of scandal.

;Paris in the 1860s: a magnificent time of expression, where brilliant young artists rebel against the stodginess of the past to freely explore new styles of creating—and bold new ways of living.

Passionate, beautiful, and utterly devoted to her art, Berthe Morisot is determined to be recognized as an important painter. But as a woman, she finds herself sometimes overlooked in favor of her male counterparts—Monet, Pissarro, Degas.

And there is one great artist among them who captivates young Berthe like none other: the celebrated genius Édouard Manet. A mesmerizing, breathtaking rogue—a shameless roué, undeterred and irresistible—his life is a wildly overgrown garden of scandal. He becomes Berthe’s mentor, her teacher…her lover, despite his curiously devoted marriage to his frumpy, unappealing wife, Suzanne, and his many rumored dalliances with his own models. For a headstrong young woman from a respectable family, an affair with such an intoxicating scoundrel can only spell heartbreak and ruin.

But Berthe refuses to resign herself to the life of quiet submission that Society has dictated for her. Undiscouraged, she will create her own destiny…and confront life—and love—on her own terms.

Award-winning author Elizabeth Robards formerly lived in France and has studied art and writing. She earned a degree in journalism only to realize reporting “just the facts” bored her silly. Much more content to report to her muse, Elizabeth has found Nirvana doing what she loves most—writing contemporary and historical women’s fiction full time. She loves to travel—and when she can’t, her imagination transports her all over the world.

“With deft brush strokes, Elizabeth Robards creates a wonderfully vivid portrait of the Second Empire and the dawn of Impressionism.” — Tracy Grant, author of Beneath a Silent Moon

What were Édouard’s feelings for Suzanne? She seemed so opposite of everything Édouard stood for, why do you suppose he married her?

If Édouard hadn’t been married to Suzanne when he met Berthe, how do you think their relationship would have been different — or would it have changed anything?

Why do you think Édouard worked so hard to win Berthe back when she pulled away, yet when he could have her he didn’t want her?

What would have happened if Berthe had gone away with Édouard when he asked her to drop everything and leave? Do you think he asked her to go away with him because he knew that ultimately she wouldn’t be able to leave Paris and her family, or do you believe he was sincere? He said he would not reveal their relationship and live with her in Paris because it would harm her reputation and she and her family would forever be societal outcasts. Do you think his intentions were pure or did he take the coward’s way out and was actually looking out only for himself?

Discuss the role of the upper class nineteenth century woman — compare and contrast Berthe with a more conventional lady of the day.

Reconcile the free-spirited Berthe (strong, independent founder of Impressionism; working woman when it was unheard of for an upper-class woman to work…) with the more traditional Berthe (painter of womanly, domestic life; devoted sister and daughter…).

Impressionism was considered an avant-garde art form and the artists associated with it were considered radical and somewhat deviant in the way they bucked the system, essentially thumbing their noses at the conventional art celebrated by the Salon — compare and contrast this to the way Berthe lived her life.

In the 1850s, Paris hadn’t changed from the medieval city of it’s origin: dark, unsanitary, narrow, winding streets. By the heyday of Impressionism in the 1870s, the old city had been leveled and replaced by Baron Housemann’s “City of Light,” which is much like the Paris we know today: wide, lighted boulevards and elegant buildings. During this period of shift, nearly half a million working class people were displaced and forced to the Paris outskirts, while the affluent moved in to the beautiful, clean, new city. Compare and contrast this rebirth of Paris to the birth of Impressionism.

It’s been said that Édouard “encouraged” Berthe to marry his brother, Eugène. Why would he do this? To sever the relationship in a tidy manner? To keep Berthe close? To have her in the family was better than to lose her forever when he realized that theirs was an impossible situation?

Food for thought: It’s been said that Manet even went as far as to suggest that by marrying Eugène, Berthe would be able to sign her name Madame E. Manet… Why do you think Berthe married Eugène?

Though Édouard Manet is often called the “father of Impressionism,” in reality, he distanced himself from the radical group, which called themselves Société Anonyme des Artistes Peintres, Sculpteurs, Graveurs, Etc.(before a critic mockingly deemed them the Impressionists), and encouraged Berthe to do the same. He is credited with this honor because the artists who would eventually come to be called the Impressionists revered him for his maverick style and indifference to authority and public opinion. Compare and contrast the conservative Édouard, who refused to join this avant-garde movement, with the man who, ten years earlier, shocked the Paris art world with his risqué paintings Luncheon on the Grass (Le déjeuner sur l’herbe) and Olympia. Why would he shy away from this ultimate chance to thumb his nose at the establishment?

After Edouard refused to join the Société Anonyme des Artistes Peintres, Sculpteurs, Graveurs, Etc. it seemed that Berthe’s career was on the rise (with or without him), while his career was beginning to level off. Compare the rise of Berthe’s career to the decline of her relationship with Édouard. Do think his refusing to associate himself with the Impressionists made Berthe fall out of love with him? Do you think she loved Édouard the man or was she in love with the illusion of Édouard the Rebel? Bring this thought into the 21st century, what role does hero worship play in our own lives? How does it shape society (magazines glorifying the unattainable image; stars in rehab; etc.)?

Re-write history: If Édouard and Berthe had ended up together how might this have changed the face of Impressionism? Or would it have made a difference?

French culture often tolerates a married man taking a mistress is as long as the mistress knows her place, makes no demands and – most importantly – does not pose a threat to the family unit. Discuss the difference in how Americans and the French view adultery. Did Berthe simply become an “inconvenient mistress” to Édouard in the end?

It’s documented that ultimately Berthe was a faithful wife to Eugène and a devoted mother to their daughter, Julie. Reconcile that idea with the letter she wrote to her brother, Tiburce, shortly after her marriage to Eugène: “

…As for myself, I have been married a whole month now, it is strange, isn’t it? I went through that great ceremony without the least pomp, in an ordinary dress and hat, like the old woman that I am, and without guests. Since then, I have been waiting for events to take shape, but so far fate is not in our favor. The trip to Contsantinople, so definite, so certain at first, is no longer certain at all. However, I shall not complain. For I have found a very nice garcon, whom I think genuinely loves me. I have entered into the positive side of life after living for so long with foolish chimeras that did not make me very happy, and yet, thinking of my mother, I wonder if I really fulfilled my duty. These are all complicated questions and it is not very easy, at least not for me, to distinguish clearly right from wrong.Your loving sister, Madame E. Manet”

What was her intention in signing it Madame E. Manet?

Check out books from the library that contain plates of Berthe Morisot’s and other Impressionistic paintings, compare their styles. Can you see how the different personalities had a certain painting “voice”?

Can you name instances of places in the story where the writing made you “see” her paintings?

Out of the circle of Impressionists, who would you most want to invite to a dinner party and why?

Considering “glass-half-empty or half-full” points of view, “With Violets” could either be considered uplifting since Berth “moved on” when she married Eugène and had a daughter who ended being the center of her world, or it could be considered a case of tragic unrequited love. How do you classify the story? If you think it’s a tragedy, what are Berthe and Édouard’s fatal flaws?

Check out books from the library that contain plates of the 11 portraits Manet painted of Morisot (see list “Manet’s Paintings of Morisot” in the section “Important Paintings”). Some claim that the extent of Édouard and Berthe’s relationship stopped at deep friendship, while other historians point to the intimate nature of the 11 portraits, the fact that he painted her more than any other woman, and that he never painted her again after she married his brother as proof of their love affair. Plus, it’s been suggested by some Morisot scholars that large sections of her diary appear to be “missing.” After studying Manet’s paintings of Morisot, what is your conclusion?

Do you believe a man and a woman can have an “intimate” but platonic friendship?