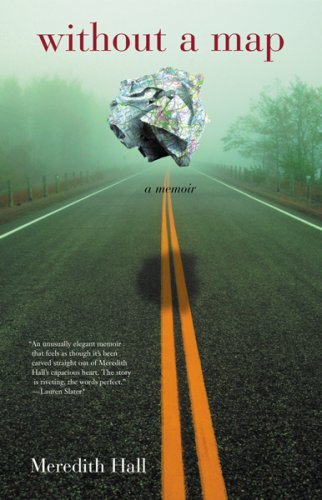 Meredith Hall’s moving but unsentimental memoir begins in 1965, when she becomes pregnant at sixteen. Shunned by her insular New Hampshire community, she is then kicked out of the house by her mother. Her father and stepmother reluctantly take her in, hiding her before they finally banish her altogether. After giving her baby up for adoption, Hall wanders recklessly through the Middle East, where she survives by selling her possessions and finally her blood. She returns to New England and stitches together a life that encircles her silenced and invisible grief. When he is twenty-one, her lost son finds her.

Meredith Hall’s moving but unsentimental memoir begins in 1965, when she becomes pregnant at sixteen. Shunned by her insular New Hampshire community, she is then kicked out of the house by her mother. Her father and stepmother reluctantly take her in, hiding her before they finally banish her altogether. After giving her baby up for adoption, Hall wanders recklessly through the Middle East, where she survives by selling her possessions and finally her blood. She returns to New England and stitches together a life that encircles her silenced and invisible grief. When he is twenty-one, her lost son finds her. Hall learns that he grew up in gritty poverty with an abusive father—in her own father’s hometown. Their reunion is tender, turbulent, and ultimately redemptive. Hall’s parents never ask for her forgiveness, yet as they age, she offers them her love. What sets Without a Map apart is the way in which loss and betrayal evolve into compassion, and compassion into wisdom.

Meredith Hall graduated from Bowdoin College at the age of forty-four. She wrote her first essay, “Killing Chickens”, in 2002. Two years later, she won the $50,000 Gift of Freedom Award from A Room of Her Own Foundation, which gave her the financial freedom to devote time to Without a Map, her first book. Her other honors include a Pushcart Prize and notable essay recognition in Best American Essays; she was also a finalist for the Rona Jaffe Award. Hall’s work has appeared in the New York Times, Creative Nonfiction, The Southern Review, Five Points, Prairie Schooner, and several anthologies. She teaches writing at the University of New Hampshire and lives in Maine.

“Written in spare, unsentimental prose, Without a Map is stunning; Meredy’s reunion with her grown son (who was raised in poverty with an abusive father) is the highlight. Book groups, take note.” —Booklist

“An unusually powerful coming-of-age memoir… Searching, humble and quietly triumphant: Hall has managed to avoid all the easy clichés.” —Kirkus

“Nostalgic for the good old days of Norman Rockwell America? Without a Map may forever change the way you look at small-town life. Meredith Hall’s memoir is a sobering portrayal of how punitive her close-knit New Hampshire community was in 1965 when, at the age of 16, she became pregnant in the course of a casual summer romance…Hall offers a testament to the importance of understanding and even forgiving the people who, however unconscious or unkind, have made us who we are.” —Francine Prose, O Magazine

When Meredith calls her mother from High Mowing School, looking for sympathy, her mother tells her. “You have no choice. You’ll be fine.… You are a survivor.” What would you have told Meredith? How does Meredith eventually survive and flourish?

Without a Map is full of references to wild things and to domestication, and is something of a struggle to hold both dear. Remember the wild scenes, including the storm at High Mowing, the storm at sea with Erik, Meredith’s mother driving out into hurricanes, the demonstrations at Cambridge, the many scenes during Meredith’s wanderings through Europe and the Middle East. The scenes of domestication include some of the early home life, the girls at Bennington College, and creating homes out of apartments while with Erik. In some places wildness and domestication are carved into the same scenes: in Newfoundland, while killing chickens, in the homey cabin in Maine’s wilderness. What roles do you think the wilderness and domestication play in the unfolding drama of Meredith’s life? Do they have roles in your life?

Without a Map continually makes reference to the political activities of the 60s—the Hampton Beach riots, the Vietnam War, demonstrations in Cambridge. Yet the narrator says that she doesn’t consider what happened to her to be a product of the times. Do you think the setting in time is important? Could this be a story of anytime?

Meredith’s identity is stripped from her when she becomes pregnant and is shunned by her family, her school, her church, and her local community. Chapter Six, “Drawing the Line,” deals in particular with identity and the stories we tell ourselves. In the final pages of the book, the author comes to a calm, rooted sense of self. How do you think she achieved that?

The sense of belonging is continually interrupted by losses in Meredith’s life: her father leaves home, her mother throws her out, Meredith abandons her baby, church and school and community shun her. Meredith talks of her wanderings in Europe as a search for disconnection and perfect detachment, and says, “My baby is shaped like this hole in me.” Paul says, “I am an alien. I belonged to no one.” Yet comfort is found in imperfect reunions and in basic biological facts, the sharing of cells and minerals. Meredith finally concludes, “I will return home, part of the world.” What is home, and what does it mean to belong?

In the first chapter, Meredith reads The Heart is a Lonely Hunter. Meredith’s father and Catherine seem to find love in each other. Meredith’s mother looks for love in many places. Meredith begs Erik, “Say it.” Paul says, “My mother loving me is what saved my life,” yet Meredith and Ruth “both understand that love is not enough.” Chapter Thirteen ends with the words, “We love each other. We need each other. That is our only map.” How is love a map? Is love a map in your life?

Why were other misfits tolerated, but not the pregnant girl? As young people, Paul stands up to Armi, but Meredith didn’t stand up to her father or to her mother. Do you think this has anything to do with gender roles? Are middle-aged women invisible? Is Meredith invisible?

We meet many mothers in Without a Map: Meredith’s mother, Meredith, Catherine, Ruth, the girl who comes to the photocopy shop, the women in the desert. What does Without a Map say about being a mother?

Meredith’s mother told her, “Don’t drag us down.” Armi told Paul, “Don’t get above your upbringing.” The fishermen don’t consider Erik as belonging because he is not of their class. Does Meredith’s sense of dislocation have anything to do with class?