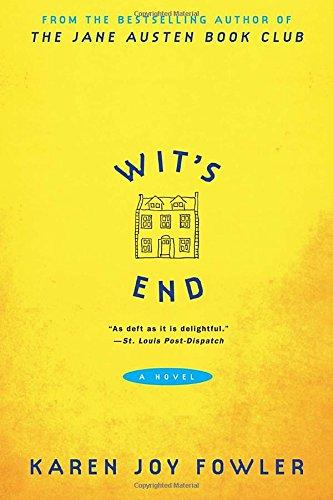 At the age of twenty-nine, Rima Lanisell is the sole surviving member of her family. Her mother died when she was a teenager, her father only recently, and in between came the death that cut deepest, that of her bold and mischievous younger brother, Oliver. Alone and unmoored, Rima accepts an invitation to join her estranged godmother, Addison Early, at Addison’s majestic Victorian home in Santa Cruz,

At the age of twenty-nine, Rima Lanisell is the sole surviving member of her family. Her mother died when she was a teenager, her father only recently, and in between came the death that cut deepest, that of her bold and mischievous younger brother, Oliver. Alone and unmoored, Rima accepts an invitation to join her estranged godmother, Addison Early, at Addison’s majestic Victorian home in Santa Cruz, California. Known as Wit’s End, the house is situated on the eroding cliffs that overlook a town still known to many as the “Murder Capital of the World,” though the serial killers and Hollywood vampires that inspired the title are now decades in the past. Also in the past is the story of Addison’s relationship with Rima’s father, Bim, and the events that led to a decades-long silence between them.

Murder, however, is alive and well at Wit’s End, in the form of the miniature crime scenes that populate every room of the house. These macabre dollhouses are the launching point for the investigations of Maxwell Lane, the fictional detective who is the hero of Addison’s wildly successful series of mystery novels. Bim appeared in one of these novels years ago, as a character best remembered for murdering his wife with a poison-clawed cat. Rima has long suspected that the story of the fictional Bim Lanisell contains some clue to the cause of the bad blood between Addison and her father. What she didn’t suspect was that someone else had taken an interest in the case—namely Constance Wellington, an aging member of a local cult whose playful letters to Maxwell Lane Rima discovers in Addison’s attic. Constance’s defenses of Bim Lanisell, the character, seem also to plead on behalf of Bim Lanisell, the man, and soon Rima begins doing some detective work of her own. Taking inspiration from the imaginary and the dead – Maxwell Lane and her brother Oliver—Rima sifts through the evidence, follows long-forgotten leads, and reconstructs the true story that inspired the fiction.

Wit’s End is a slyly humorous detective story that is low on blood but filled with verve and insight. Karen Joy Fowler smartly captures the offbeat rhythms of Santa Cruz, with its aging hippies, territorial surfers, and spiritual transients as much a part of the local ecology as the sprawling forests and tumultuous surf. Set against this colorful backdrop is the story of a young woman whose life has been beset by loss. Rima’s investigation is as much an exploration of herself—and the grief she has yet to come to terms with—as it is of her father’s history with Addison. But what Rima discovers provides much-needed answers for Addison as well, allowing them both to put the past to rest and begin looking to the future.

Karen Joy Fowler’s most recent novel, The Jane Austen Book Club, was on bestseller lists nationwide and spent thirteen weeks on the New York Times list. Along with her first two novels, it was a New York Times Notable Book.

“Fowler’s understated wit and storytelling skills are in full flower.” —The Boston Globe

“[A] Rubik’s cube of a book…this is venturesome work.” —The Seattle Times

“Fowler’s subtle humor glides across these pages.” —The Washington Post

“[A] cyber-gothic-mystery-romance (you heard it coined here), and it’s a lovely read.”
—The Sunday Oregonian

In the first pages of the novel, Rima recalls having once read that “when someone important to you dies, they come back in a dream to say good-bye”—but that she has yet to hear from any of her lost family members. How does this sense of unresolved loss motivate her actions throughout the story? Is Oliver’s “guidance” to Rima as she unravels her father’s past a form of the “good-bye” she has been waiting for?

Addison says that novels will be an unreliable source of information for future historians because “No one in novels watches TV.” Wit’s End, however, includes numerous references to television and television watching. How do these references add to the novel’s sense of realism? What do the characters’ preferences in movies and television shows reveal about them?

Discuss the author’s depiction of Santa Cruz. How does she evoke the unique atmosphere and character of this city? How important is this setting to the story? Could you imagine it taking place in another locale?

Rima returns many times to a question her father once asked her: “Would you want to be remembered as you were or as better than you were?” Consider the overall themes of the novel in the context of this question. How do you think each of the characters would answer it?

Rima’s feelings for Martin remain in flux throughout the book: “She liked him and then she didn’t like him and then she liked him.” Ultimately, she realizes that her grief over Oliver’s death—and Martin’s similarities to him—is the source of her ambivalence. How do you think their relationship will develop? Does she truly think of Martin as her “little brother,” or might they eventually develop a romantic relationship?

Consider the character of Pamela Price. Though she goes to some lengths to demonstrate that blackmail is not her motivation, her infatuation with Addison’s past clearly borders on obsession. Is she dangerously deranged, or simply an overly zealous fan? If Addison had encountered her at Holy City instead of Rima, do you think the scene could have turned violent?

Wit’s End is set during a very specific moment in recent history: the 2006 mid-term elections that saw Democrats take the majority in the United States Congress. Why do you think the author chose to highlight these events in the novel? How do the characters’ discussions of political events inform our understanding of them?

Discuss the author’s use of humor. Why did the author choose to employ wit as much as pathos in telling this story? Is the novel’s title ironic?