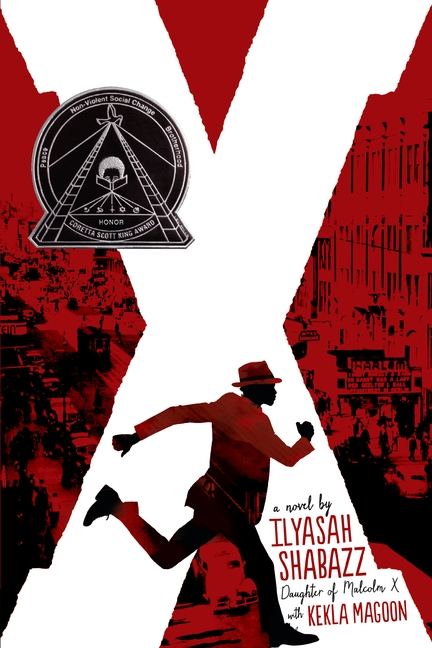 Cowritten by Malcolm X’s daughter, this riveting and revealing novel follows the formative years of the man whose words and actions shook the world.

Malcolm Little’s parents have always told him that he can achieve anything, but from what he can tell, that’s a pack of lies—after all, his father’s been murdered, his mother’s been taken away, and his dreams of becoming a lawyer have gotten him laughed out of school.

Cowritten by Malcolm X’s daughter, this riveting and revealing novel follows the formative years of the man whose words and actions shook the world.

Malcolm Little’s parents have always told him that he can achieve anything, but from what he can tell, that’s a pack of lies—after all, his father’s been murdered, his mother’s been taken away, and his dreams of becoming a lawyer have gotten him laughed out of school. There’s no point in trying, he figures, and lured by the nightlife of Boston and New York, he escapes into a world of fancy suits, jazz, girls, and reefer. But Malcolm’s efforts to leave the past behind lead him into increasingly dangerous territory. Deep down, he knows that the freedom he’s found is only an illusion—and that he can’t run forever.

X follows Malcolm from his childhood to his imprisonment for theft at age twenty, when he found the faith that would lead him to forge a new path and command a voice that still resonates today.

Ilyasah Shabazz, third daughter of Malcolm X, is an activist, producer, motivational speaker, and author of the critically acclaimed Growing Up X and the picture book Malcolm Little: The Boy Who Grew Up to Become Malcolm X. She lives in Westchester County, New York.

Kekla Magoon is an award-winning author of many young adult novels, including The Rock and the River, for which she received the 2010 Coretta Scott King–John Steptoe Award for New Talent. Kekla Magoon lives in New York City.

“Although this is a work of fiction, it’s strongly tethered to the facts, to the people and events that contributed to Malcolm’s world view and his path to becoming a leader. Malcolm’s voice is often funny, always perceptive, and as appreciative of beauty as he is critical of the disparity between the rights of whites and blacks.” – Shelf Awareness (starred review)

“This fictionalized account of the boy who became Malcolm X maintains a suspenseful, poetic grip as it shifts among moments in his life between the years 1930 and 1948. … A compelling coming-of-age story.” – Publishers Weekly (starred review)

“This could be a novel about any adolescent and his dark night of the soul, but it’s in fact a powerful, fully credible reimagining of the young adulthood of Malcolm Little, who, after reaching rock bottom in prison for robbery, will discover a better path and a new identity as Malcolm X.” – Bulletin of the Center for Children’s Books (starred review)

“Thanks to the strength of the intimate first-person voice, readers experience right along with the adolescent Malcolm his thirst for experience, the seductive “siren call” of 1940s Roxbury and Harlem street life, his increasingly risky and dangerous choices, and finally his growing awareness of the impact of racism on his and his family’s past and on his present and future.” – The Horn Book (starred review)

“An eye-opening look at an important historical figure. The author’s honesty about his early troubles serves to convey that it is possible to rise through adversity to make a positive difference in this world. A worthwhile addition to any collection.” – School Library Journal (starred review)

“Shabazz and Magoon bring energy, immediacy, and emotional power to Malcolm’s first-person, present-tense voice. Often painfully candid, the authors effectively depict Malcolm’s lifetime of racial slurs and casual injustices, symbolized by the image of a lynched man hanging from a tree. It’s a satisfyingly complete, never simplistic story of one young man’s journey through trouble to the promise of a life of purpose and meaning.” – Booklist (starred review)

1. Instead of telling the story in chronological order, the author moves back and forth through time. What effect does this have on the story? Why is this important to the story?

2. Early in the story, Malcolm says “I am my father’s son. But to be my father’s son means that they will always come for me” (page 5). What do you think Malcolm means? How does this statement foreshadow everything that happens to him?

3. Malcolm buys a bus ticket to Boston, and in that moment he realizes “it takes less than a minute to buy a new life” (page 8). What do you think Malcolm means? How did that one action change Malcolm’s life?

4. As Malcolm leaves for Boston, he reminisces about his biological family and his foster family and comes to the conclusion that leaving won’t be very difficult. Why does he feel this way?

5. Malcolm refers to the influence Marcus Garvey had on both of his parents. What did Garvey stand for, and how can his influence be seen in the way Malcolm thinks?

6. When Malcom is very young, his parents tell him that he can be anything he wants to be. While Malcolm believes this for a while, he later decides that their counsel is not true. What causes Malcolm to turn away from his dreams?

7. In Chapter 3, Mr. Ostrowski shares his true opinion of Malcolm’s potential. What effect does this conversation have on Malcolm, and how does it influence his future actions?

8. Upon Malcolm’s arrival in Boston, his half-sister Ella wants him to experience the city before he gets a job. How does this change Malcolm?

9. Shorty tells Malcolm: “In this world, everything’s a hustle. . . . If it doesn’t look like a hustle, you got to look at it from another angle” (page 114). Why does hustling appeal to Malcolm so much? Why is he drawn to the world of the hustler?

10. Everyone seems willing to offer Malcolm credit at first. How does this become a problem for him later on?

11. Malcolm’s family confronts him about his selling and using drugs, dating white women, and losing his job. How does Malcolm rationalize his actions, and what does this do to his relationship with his family?

12. When Malcolm works at Small’s in Harlem, he listens as two men discuss “Negro improvement.” Malcolm reasons that “Negroes don’t need improvement. Real Negroes don’t sit around and talk about how things should be and what they should have. Real Negroes go out and get some of their own” (page 253). How has Malcolm’s life up to this point personified this sentiment? Why does he feel this way?

14. Malcolm feels that it is inevitable that he will go to jail and claims “the whole court is out to get [him]” (page 322). Whom does Malcolm blame for his troubles and why?

15. 22843. With these numbers, Malcolm begins to look at his life in a new way. How does Malcolm see the world through these numbers?

16. After hearing and seeing Bembry in prison, Malcolm remembers that “words are a weapon” (page 331). What do these words mean to Malcolm, and how does he begin to change?

17. What impact does Elijah Muhammad have on Malcolm? How do his words change Malcolm?

18. Malcolm believes that everything in his life has led him to where he has arrived, to be a new man, to follow Islam, and to be ready to serve Allah. Do you agree or disagree? Why or why not?

19. The words “Up, up, you mighty race” resonate with Malcolm. How does he use these words to create a new life for himself and his people?

20. At the end of the story, Ilyasah Shabazz has added notes to explain many of the events that take place in this novel. Why did she choose to combine fiction and facts? What effect does this have on the story she has told?