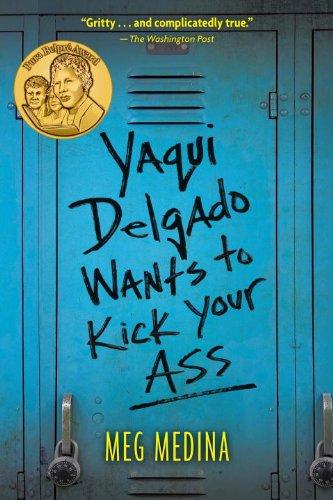 In Meg Medina’s 2014 Pura Belpré Author Award Winner, a Latina teen is targeted by a bully at her new school — and must discover resources she never knew she had.

One morning before school, some girl tells Piddy Sanchez that Yaqui Delgado hates her and wants to kick her ass. Piddy doesn’t even know who Yaqui is, never mind what she’s done to piss her off. Word is that Yaqui thinks Piddy is stuck-up, shakes her stuff when she walks, and isn’t Latin enough with her white skin, good grades, and no accent. And Yaqui isn’t kidding around,

In Meg Medina’s 2014 Pura Belpré Author Award Winner, a Latina teen is targeted by a bully at her new school — and must discover resources she never knew she had.

One morning before school, some girl tells Piddy Sanchez that Yaqui Delgado hates her and wants to kick her ass. Piddy doesn’t even know who Yaqui is, never mind what she’s done to piss her off. Word is that Yaqui thinks Piddy is stuck-up, shakes her stuff when she walks, and isn’t Latin enough with her white skin, good grades, and no accent. And Yaqui isn’t kidding around, so Piddy better watch her back. At first Piddy is more concerned with trying to find out more about the father she’s never met and how to balance honors courses with her weekend job at the neighborhood hair salon. But as the harassment escalates, avoiding Yaqui and her gang starts to take over Piddy’s life. Is there any way for Piddy to survive without closing herself off or running away? In an all-too-realistic novel, Meg Medina portrays a sympathetic heroine who is forced to decide who she really is.

Meg Medina is the author of The Girl Who Could Silence the Wind and the picture book Tía Isa Wants a Car, illustrated by Claudio Muñoz, which won the Ezra Jack Keats New Writer Award. The daughter of Cuban immigrants, she grew up in Queens, New York, and now lives in Richmond, Virginia.

“Books about bullying are on the rise as adults grapple with its causes and impact—and young people struggle to deal with it. This gritty novel manages to transcend the usual earnest fictional treatment by delivering a protagonist who is more than a mere victim and an ending that rings complicatedly true. This unflinching novel, with its richly developed main character, deserves a place with two other nuanced bully books for teens: Rita Williams-Garcia’s

Jumped, a 2009 National Book Award finalist that explores the mindsets of bully, victim and bystander; and Adam Rex’s Fat Vampire, in which a main character confronts her guilt as a cyberbully.”

“A nuanced, heart-wrenching and ultimately empowering story about bullying….Interweaving themes of identity, escapism and body image, Medina takes what could be a didactic morality tale and spins it into something beautiful: a story rich in depth and heart…Far more than just a problem novel, this book sheds light on a serious issue without ever losing sight of its craft.”

“Medina emphasizes Piddy’s acute sense of isolation without overplaying it, and she absolutely respects the totality of Piddy’s quandary…The message here is that tough and unfair stuff is really tough and unfair, but it’s also survivable; that’s a takeaway that readers will recognize as both true and valuable.”

—Bulletin of the Center for Children's Books (starred review)

“The Latino cultural milieu adds a richness and texture that lifts this up above many problem novels. The plot points are dexterously intertwined, and the characters are distinct. A real bonus for those looking for a bullying book for older readers that is not simplistic.”

Yaqui Delgado Wants to Kick Your Ass is a title that grabs your attention. What makes it so fitting for this novel?

At Piddy’s new high school, kids tend to eat lunch with their own kind — blacks with blacks, Latinas with Latinas, and nerds with nerds. Does this also happen at your school? If so, why? Why is there often so little diversity in social groups?

On the surface, Lila and Piddy’s mother seem like polar opposites, but look deeper. What are the significant differences between the two women? What are the abiding similarities? Why does Piddy need them both?

“She thinks we get a bad rap as Latinos,” Piddy says about her mother, “which she’s always trying to undo by being extra quiet and polite all the time” (page 9). How are Latinas stereotyped in popular culture? Why is Ma determined to set herself and her daughter apart? Would their lives be happier if she didn’t?

“What’s worse?” Joey asks Piddy. “Having no dad or having a mean son of a bitch like mine?” (page 45). How would you answer his question? How would Piddy? Why?

Ma is ashamed of her long-ago relationship with Piddy’s father. Should she be? Why hasn’t she been honest with her daughter? Has the secrecy been more harmful to Piddy than the truth would have been?

Salón Corazón, according to the Piddy, is “one part hair salon, three parts social hangout” (page 59). Why do customers flock to the salon? What makes the place so important to Piddy?

Many of the women at the salon tell Piddy that she has become a woman, but according to Piddy, “None of them ever sounds too happy about it” (page 63). Why aren’t they happy? Consider what might make being a woman difficult from their point of view.

Yaqui Delgado Wants to Kick Your Ass is a serious novel, but it can also be very funny. What are some of your favorite comic lines or moments? What do they reveal about the characters?

Spanish words and phrases appear throughout this novel. If you know Spanish, translate the words into colloquial English. If you don’t, use context to determine meaning. Why do you think the author didn’t include a glossary in this book?

Best friends in the old neighborhood, Mitzi and Piddy seem headed in opposite directions after Mitzi moves out of Queens. What does each fear that the other is becoming? Are those fears justified? Why or why not?

Although Piddy’s life is full of strong women, very few men are included. Who are the significant males in her life? Why are they so rare?

Why do you think Yaqui Delgado wants to kick Piddy’s ass? Does she really think Piddy is after her boyfriend? Is she jealous of Piddy’s intelligence? Is she just mean? Does her motive matter?

“It’s not fair,” Piddy realizes, “that I have to upend my life because Yaqui is bloodthirsty” (page 254). What does Piddy decide is more important to her than fairness? Would you have made the same decision? Why or why not?

“What constitutes a revolution?” Piddy’s history teacher asks (page 39). Does Daniel Jones High School need a revolution? Who will have to lead it? What are its chances of success?

By the end of the novel, Piddy’s future once again looks bright. What about Yaqui’s future? What do you imagine her adult life will be like?

Despite the sign posted outside the guidance office, DJ is definitely not a “Bully-Free Zone” (page 75). Why is bullying so hard to stop? What steps has your community taken to prevent bullying? How effective have they been?