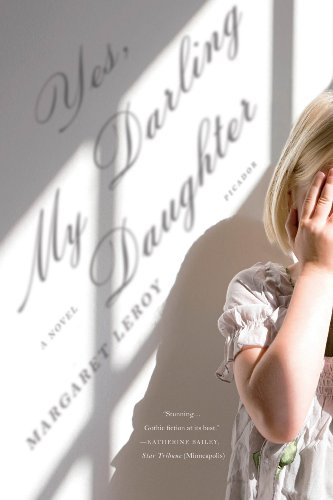 What’s the matter with Sylvie?

Such a pretty girl. Four years old; well loved by her young mother, Grace. But there’s something . . . “off ” about the child. Her deathly fear of water; her night terrors; most of all, her fixation with a photo of an Irish seaside town called Coldharbour.

“Sylvie, tell me about your picture. Why’s it so special, sweetheart?” My heart is racing, but I try to make my voice quite calm.

What’s the matter with Sylvie?

Such a pretty girl. Four years old; well loved by her young mother, Grace. But there’s something . . . “off ” about the child. Her deathly fear of water; her night terrors; most of all, her fixation with a photo of an Irish seaside town called Coldharbour.

“Sylvie, tell me about your picture. Why’s it so special, sweetheart?” My heart is racing, but I try to make my voice quite calm.

“That’s my seaside, Grace.” Very matter-of-fact, as though this should be obvious. “I lived there, Grace. Before.”

Margaret Leroy was born in England, and studied music at Oxford. She has worked as a music therapist, teacher, and psychiatric social worker. She is the author of four previous novels.

“Fans of old-fashioned gothics will welcome this tale of love, betrayal and death from British author Leroy . . . Leroy’s prose lures readers into a disturbing murder mystery. Her characters are as realistic and intriguing as her locales in England and Ireland.”
—Publishers Weekly (starred review)

A poignant ghost story . . . Leroy is an evocative writer who expertly conjures up the cloud of fear enveloping a mother struggling to reach her child.” —Muriel Dobbin, The Washington Times

The story’s characters all take different positions on the supernatural: Lavinia seems very open to it, while Karen and many others are deeply suspicious of any non-scientific explanation, and warn Grace against considering it. Did you find the premise of reincarnation convincing? Do you think it’s possible that cases of reincarnation, or similar supernatural events, occur in real life.

How did your ideas about what was wrong with Sylvie change as the story went on? At what point did you begin to believe that something supernatural was involved?

What role does Grace being a single mother play in the story? How does it affect the way she’s treated by other people? Did the representation of Grace’s experience as a single mother seem accurate to you?

Several people suggest to Grace that she needs to set stricter boundaries for Sylvie, that she’s enabling Sylvie’s behavior by forgiving her outbursts. Do you agree? How do you think Grace should’ve handled Sylvie’s behavior in the early stages?

When Lavinia asks Grace why she never presses Sylvie about calling her “mum,” Grace thinks, “I don’t tell her the real reason. That I’m scared of what might happen.” Are there other instances in the book where Grace hides from the truth? How does this dynamic affect her life—and Sylvie’s?

Why do you think Grace trusts Adam? What leads her to open up to his theories and let him examine Sylvie?

Sylvie refuses to tell anyone much about her past life until the end of the story. Do you think she was unwilling to tell, or unable to see beyond a few elements of what had happened to Jessica? What did you imagine was going on inside her mind before she and Grace came to Ireland?

Do you think Adam is right to press Sylvie so directly for the details of her past life? Is he right when he says to Grace, “You can’t protect her.… Whatever happened, has happened,” (p. 238)? Or is he risking making things worse for her?

“Why do we do what we do?” Lavinia asks Grace when they’re discussing Adam’s motives (p. 167). “Is anyone really objective?” What does Lavinia mean? What are the motives underlying the different characters’ theories about Sylvie, and the ways they treat her and Grace?

Do you believe that some people are more attuned to spiritual forces in the world than others? What makes such people receptive? Do you think it’s more of a burden or a privilege?

It’s unclear at the end of the story just how much Sylvie has been able to disconnect from her memories of what happened to Jessica. How do you imagine she’ll behave from now on? What do you think Grace and Sylvie’s relationship will be like once they return home?