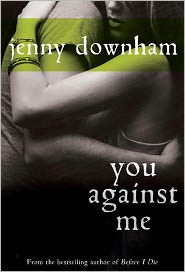 If someone hurts your sister and you’re any kind of man, you seek revenge.
If your brother’s accused of a terrible crime but says he didn’t do it, you defend him.

When Mikey’s sister claims a boy assaulted her, his world begins to fall apart. When Ellie’s brother is charged with the offense, her world begins to unravel. When Mikey and Ellie meet, two worlds collide.

This is a brave and unflinching novel from the bestselling author of Before I Die. It’s a book about loyalty and the choices that come with it.

If someone hurts your sister and you’re any kind of man, you seek revenge.
If your brother’s accused of a terrible crime but says he didn’t do it, you defend him.

When Mikey’s sister claims a boy assaulted her, his world begins to fall apart. When Ellie’s brother is charged with the offense, her world begins to unravel. When Mikey and Ellie meet, two worlds collide.

Jenny Downham (born 1964) was an actress for many years before concentrating on her writing full-time. She lives in London with her two sons. Her book Before I Die was critically acclaimed and was short listed for the 2007 Guardian Award and the 2008 Lancashire Children’s Book of the Year, nominated for the 2008 Carnegie Medal and the 2008 Booktrust Teenage Prize, and won the 2008 Branford Boase Award.

“An outstanding, compelling drama from Downham.”
—Fiona Noble, The Bookseller

“It’s one of the most powerful books we’ve read in an age. Even after finishing, it lingered with us for days . . . Jenny Downham’s novel blows other books out of the water.”—Sugar

“A tale of love across the social divide in coastal Norfolk, with the edge of a crime novel…Split loyalties and the chasm between the young couple’s life experiences make their enduring relationship a triumph. Their credible and tender sexual encounter is the calm before the storm, as for Romeo and Juliet.”—Observer

“An intense and arresting love story”—Natasha Harding, The Sun

Mikey McKenzie is already the “man” of his family. How is he forced to take total responsibility for his family after Karyn is assaulted? He says that taking care of Karyn makes him feel “adult, male, and purposeful.” (p. 20) How does his mother’s inability to accept responsibility for her family contribute to Mikey’s sense of duty?

Debate what action Mikey should have taken. It is common for a secondary survivor to feel guilt, shame, frustration, and helplessness. How do each of these emotions describe Karyn’s mother.   Debate whether Ellie Parker is a secondary survivor. At what point does she feel frustrated and helpless?  Discuss whether it’s guilt and shame that ultimately causes her to tell the truth.

Karyn’s mum deals with her daughter’s rape by hiding away. How do the Parkers deal with the rape? Why do they plan a party for their son when he gets bail? Debate whether this type of celebration is a form of hiding. Why does the party make Tom nervous?

Karyn’s mum takes her to the police because she thinks they will help her. A policewoman is assigned to Karyn’s case. Why does Karyn refuse to talk with her? Discuss why Mrs. McKenzie is sorry she ever got the cops involved.

Ellie Parker is a primary witness for her brother. She feels a mixture of “pity and fear” in this role. For whom does she feel pity? Discuss who and what she fears the most. How does watching her family preceding the trial escalate her feelings?

Karyn won’t go to school because she fears that people will stare at her as if she deserved to be assaulted by Tom Parker. Explain why Karyn feels that her peers will think she “deserved” the assault. Her friends are supportive, but she blocks them completely out.  Why does she refuse to see them?

Ellie Parker is a new kid at school, and finds it difficult to make friends. How does being the sister of an alleged rapist make Ellie even more an outsider? Discuss how Karyn’s friends treat her.

Mikey says to Ellie, “What I did to you was out of order. What you did to me I probably deserved. So we’re even, ok?” (p. 227) Why was it legally dangerous for Mikey and Ellie to take matters into their own hands? How do they both grow and change because their plans went awry?

Explain what Mikey’s mother means when she tells him, “If you want a girl to like you, you have to listen like a woman and love like a man.” (p. 166) How does Mikey treat Ellie with respect and tenderness once they realize that they care for one another?

Both Karyn and Ellie are afraid of going to court. What does Karyn fear most about testifying before a judge? Discuss Ellie’s fears. Debate whether they have conquered their fears by the end of the novel.

Ellie admits that she lied to the police. She tells Mikey, “You might think that I’m brave, but really I’m a coward.” (p. 296) Why does Ellie think that she is a coward? How does it take bravery to tell the truth? Discuss how Ellie is the bravest member of her family.

Ellie’s mother and father react very differently to her confession. What causes the change in Mrs. Parker? Debate whether she is strong enough to support her daughter through the ordeal of the trial.

Ellie still has to testify against her brother. Discuss the wrath that she is likely to experience from her father. Why is Mr. Parker so willing to sacrifice his daughter’s reputation to save his son? Explain Mr. Parker’s reaction when Tom says, “I can’t do it to her Dad. . . . You said yourself that they will break her apart.” (p. 399)

Mikey tells Ellie that Karyn gets help through social services. How does Mikey provide Ellie the help she needs?  Why does he think it a good idea that Ellie talk to Karyn?

At the end of the novel, Mikey says, “Maybe we can grab something good out of this while we can.” (p. 409) What good has come out of this entire situation? Talk about the lessons that Karyn and her peers, and Tom and his mates have learned. Discuss whether the novel is Ellie and Mikey’s story or Karyn and Tom’s story.

As in the novel, many sexual assault cases are one person’s word against another. What is the overall message that a reader should take away from You Against Me?