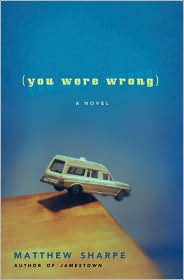 It is 2008 in the suburban town of Seacrest, Long Island. Twenty-six-year-old high school math teacher Karl Floor has no parents, no friends, few prospects, is a dim bulb, and lives at home with Larchmont Jones, the aggressively loquacious widower of Karl’s mother. One fine afternoon, Karl returns to his house after work to discover a beautiful stranger in the upstairs hallway. She is Sylvia Vetch, and claims to be robbing him. She also asks for his protection, but won’t quite say from what or whom, and draws him into troubles she won’t elucidate.

It is 2008 in the suburban town of Seacrest, Long Island. Twenty-six-year-old high school math teacher Karl Floor has no parents, no friends, few prospects, is a dim bulb, and lives at home with Larchmont Jones, the aggressively loquacious widower of Karl’s mother. One fine afternoon, Karl returns to his house after work to discover a beautiful stranger in the upstairs hallway. She is Sylvia Vetch, and claims to be robbing him. She also asks for his protection, but won’t quite say from what or whom, and draws him into troubles she won’t elucidate.

No Sherlock Holmes, Karl still slowly begins to see and engage the complex forces that have been shaping his life: his parentage and inheritance, morality and law, the racial and economic geography of present-day New York City and the world at large.

Darkly funny and original, You Were Wrong is a surreal detective story told with heart, wit, and a singular voice.

Matthew Sharpe is the author of the novels Jamestown, The Sleeping Father and Nothing Is Terrible, as well as the short-story collection Stories from the Tube. He teaches creative writing at Wesleyan University. His stories and essays have appeared in Harper’s Magazine, Zoetrope, BOMB, McSweeney’s, American Letters & Commentary, Southwest Review, and Teachers & Writers. He lives in New York City.

“Fans of Sharpe’s previous work as well as contemporary fiction authors such as Dave Eggers or David Foster Wallace should seek out this darkly comic novel.”—Library Journal

“A pleasing odd and intelligent novel…What’s most winning about You Were Wrong is its acumen and the brio with which [Sharpe’s] sentence-making bears it out. The book is rich with devastatingly comic observations about people, places, and things. You Were Wrong might not save your life, but never mind; Matthew Sharpe is saving prose from the banal, one word at a time.” —New YorkTimes Book Review

“Matthew Sharpe sets himself some high hurdles to clear in a novel that can cautiously be characterized as offbeat. Sullen, sluggish, and self-involved as any teenager, Karl is not a natural hero. To raise the ante, Sharpe uses an edgy, ironic narrative voice that keeps us guessing where to place our emotional bets. With craft and wit he meets the challenge, producing one of the weirdest love stories we’re likely to read anytime soon.”
—Boston Globe.

Consider the title of the novel. Who has been wrong about what? What “wrongs” are

corrected, and which misconceptions remain until the very end?

You Were Wrong opens with a short summary of Karl’s life: “At twenty-six, Karl Floor had had a hard life: father dead, mother dead, stepdad sick and mean, siblings none, friends none, foes so offhanded in their molestations that they did not make a crisp enough focal point for his energies” (1). Does this snapshot biography sum up Karl, or is there more to his personality? Do these hardships justify his unhappiness? Why or why not?

You Were Wrong: Karl and Jones’s shared home, Sylvia’s party shack, and Stony’s estate. Why are houses so important to the characters who own them? How does each house reflect its owners?

What are Karl’s first impressions of Stony, and how do his impressions change or remain the same over time? In which moments does Stony show some vulnerability?

Discuss the relationship between Karl and his stepfather, Larchmont Jones. What fundamental lies have shaped their relationship? Does Karl intend to kill Jones, or is he surprised by his own violent impulses toward his stepfather?

What is the role of race in

You Were Wrong?  How does Karl react to the racial identitiesof other characters?

Although she died years ago, Karl’s mother continues to have a significant impact upon her family. How does Karl express his mourning for his mother? How does her memory serve to keep Karl and his stepfather together, and how does her absence drive the two men apart?

Consider Karl’s impressions of Brooklyn. How does he view the city as he drives in from Long Island? How do the scenes set in Brooklyn differ from the rest of the novel?

In the end, why does Sylvia marry Stony? Who benefits from this marriage, and who suffers the consequences? What role does Karl play in their relationship? Is he able to protect Sylvia, as promised? Why or why not?

Sylvia calls Karl “this innocent, adorable, melancholy weirdo who’s just himself, who isn’t machinating or striving, who wants nothing more than to carry on with his unambitious, unremarkable life” (164). Do you agree with Sylvia’s view of Karl? Why or why not? Why does this aspect of Karl’s personality appeal to Sylvia?

You Were Wrong contains several violent scenes, including Karl’s after-school beating, Jones’s near-death by pool cue, Stony’s failed attempt to cut off Karl’s finger, and Stony’s stabbing. How is violence depicted in the novel? When do violence and dark humor intersect?

Arv, Paul, and Hal—Stony’s sidekick, and the two high school students he hires to attack Karl—make an unusual backdrop of minor characters in

You Were Wrong. What motivates these three characters? How do they come to a peaceful resolution with Karl?

In a surreal moment of the novel, a nightingale swoops into Karl’s bedroom and exchanges hearts with him. What does this black bird symbolize? What effect does this “black bird heart in his breast” (107) have upon Karl, as he faces the news of Stony and Sylvia’s wedding?