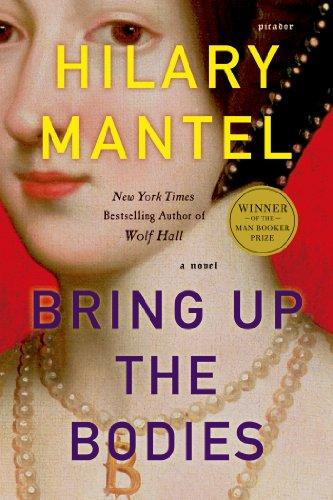 BRING UP THE BODIES

The sequel to Hilary Mantel’s 2009 Man Booker Prize winner and New York Times bestseller, Bring Up the Bodies delves into the heart of Tudor history with the downfall of Anne Boleyn.

Though he battled for years to marry her—a story told in Wolf Hall—Henry is now disenchanted with Anne Boleyn. She has failed to give him a son, and her sharp intelligence alienates his old friends and the noble families of England. At a word from Henry, Thomas Cromwell is ready to bring her down. Over a few terrifying weeks,

The sequel to Hilary Mantel’s 2009 Man Booker Prize winner and New York Times bestseller, Bring Up the Bodies delves into the heart of Tudor history with the downfall of Anne Boleyn.

Though he battled for years to marry her—a story told in Wolf Hall—Henry is now disenchanted with Anne Boleyn. She has failed to give him a son, and her sharp intelligence alienates his old friends and the noble families of England. At a word from Henry, Thomas Cromwell is ready to bring her down. Over a few terrifying weeks, Cromwell ensnares her in a web of conspiracy, while the demure Jane Seymour waits her turn for the poisoned wedding ring. But Anne and her powerful family will not yield without a ferocious struggle, and to defeat the Boleyns, Cromwell must now ally himself with his enemies. What price will he pay for Anne’s head?

Hailed around the world as a stunning literary achievement, Bring Up the Bodies evokes this frightening episode of English history as no book has before.

Hilary Mantel is the bestselling author of many novels including Wolf Hall, which won the Man Booker Prize and the National Book Critics Circle Award for fiction. Bring Up the Bodies, Book Two of the Thomas Cromwell Trilogy, was also awarded the Man Booker Prize and the Costa Book Award. She is also the author of A Change of Climate, A Place of Greater Safety, Eight Months on Ghazzah Street, An Experiment in Love, The Giant, O’Brien, Fludd, Beyond Black, Every Day Is Mother’s Day, and Vacant Possession. She has also written a memoir, Giving Up the Ghost. Mantel was the winner of the Hawthornden Prize, and her reviews and essays have appeared in The New York Times, The New York Review of Books, and the London Review of Books. She lives in England with her husband.

“Beautifully constructed…The wonder of Mantel’s retelling is that she makes these events fresh and terrifying all over again….Sublime.”—Janet Maslin, New York Times

“Marvelous, intoxicating…Read Bring Up the Bodies for its chilling character profile, its period details on jousting and Tudor kitchens, its congregation of the seven deadly sins….Nobody should skip a heady word of Mantel’s planned trilogy.”—The Cleveland Plain Dealer

“Mantel has the maddeningly unteachable gift of being interesting….All is alive, silvery, alert, rapid with insight.”—James Wood, The New Yorker

The novel starts off with a description of hawks soaring in the sky and swooping in to slaughter their prey. In the same manner, the novel closes off with an image of a fox attacking a hen coop. What is the significance of these animals and what do they symbolize?

How has Cromwell’s upbringing influenced him to become the shrewd and ambitious man that he is? What is the significance of Cromwell refusing to adopt the coat of arms belonging to a noble Cromwell family even as he widens the chasm between his father and himself? How does Cromwell view family and how is it different from his own experience growing up?

How is King Henry VIII described in the novel? Is he self-serving, or does he truly believe in the validity of his actions? Does he come over as a sympathetic character?

Katherine is accused by Cromwell of causing the split within the church, and of endangering her daughter Mary, by her stubborn resistance to the King’s wishes. Do you view Katherine as a relentless and self-indulgent queen or is she noble for staying true to her beliefs?

Cromwell believes that England “will keep spiraling backwards into the dirty past” unless blunders are forgotten and old quarrels ended. How does this belief influence his actions in trying to build a new England? Does the king help or hinder him in this urge for renewal? How far are Cromwell’s actions unselfish, and how far are they self-serving?

King Henry had fawned over all three women (Katherine, Anne, Jane) at one point in time. His past actions indicate that he loved his former wives, yet each affair proves temporary. How does Henry view love? Why do the women in the novel endeavor to wear the “poisoned ring?”

There is enormous power in a woman’s gaze. How do the women in this novel utilize their feminine wiles to their advantage? What effect do they have on men subject to their lure, and what does this tell you about women’s power over their male counterparts?

Birth and is a major conceit throughout the novel. As “nails give birth to nails,” are children the product of their parents? Consider the parent-child relationships in the novel. What influence do parents have on their progeny?

When the King is thought to be dead after a jousting accident, there is a sudden rush to claim the crown. Are the players idealists, attempting to realize their political and religious ideals for England, or are they simply interested in getting power for themselves?’

Anne Boleyn is accused of committing adultery and even incest. Could there be any truth in these accusations, or are they complete fabrications by her enemies? How does she change once she realizes she is in danger?’

Cromwell seems very protective of Wyatt and saves him from death, even though he is widely suspected of being one of Anne’s lovers. Why does Cromwell feel such a strong need to defend him when he vehemently accuses others of being the Queen’s bedfellows? What sets Wyatt apart from the other men portrayed in the novel? What have Wyatt and Cromwell in common?’

Does the novel make you reconsider your view of the Tudors?

The story concludes with Cromwell’s claim that there are no endings, only beginnings. The country now has a new queen and a new leading family. What does this mean for England’s future? What do you think Cromwell’s role will be in the new order?

The execution of Anne Boleyn is one of the most frightening moments in English history. Anne’s last words are scripted to appease the King. What do you think would have been Anne’s last words had there not been any consequences?