A rich, sultry, ambitious novel about a young American writer/curator, fleeing a crumbling marriage in New York who travels with her nine-year old daughter to one of the remote islands in the north of Scotland, birthplace of her grandfather.

Commissioned to set up a museum there and to write the biography of the island’s celebrated poet and chronicler, Mhairi McPhail is slowly drawn in by the complicated life she is uncovering and writing about—the Bard of Fascaray—as she finds herself being transformed, awakened by the ferocity and power of the island.

Who was the celebrated poet,

A rich, sultry, ambitious novel about a young American writer/curator, fleeing a crumbling marriage in New York who travels with her nine-year old daughter to one of the remote islands in the north of Scotland, birthplace of her grandfather.

Commissioned to set up a museum there and to write the biography of the island’s celebrated poet and chronicler, Mhairi McPhail is slowly drawn in by the complicated life she is uncovering and writing about—the Bard of Fascaray—as she finds herself being transformed, awakened by the ferocity and power of the island.

Who was the celebrated poet, Grigor McWatt, The Bard of Fascaray? What was his past? Details of his life are elusive. As Mhairi struggles to adapt to her island life and put her disappointment and troubles behind her, she begins to unearth the astonishing secret history of the poet, regarded by many as the custodian of Fascaray’s—and Scotland’s—soul.

In McAfee’s rich novel of invented island life, she interweaves extracts from Mhairi’s journal entries, her discoveries and writings of McWatt, and tales of Fascaray itself into a resonant, compelling, dimensional narrative that at its heart explores identity, love, belonging and the universal quest for home. 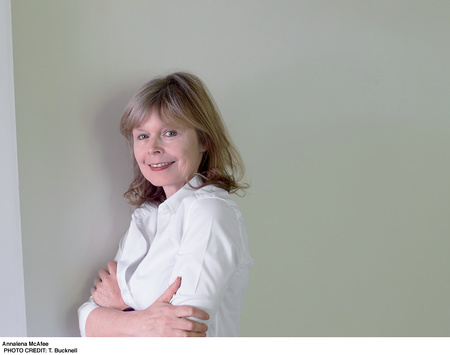 Annalena McAfee was born in London and educated at Essex University. She is the author of The Spoiler and eight children’s books. She worked at the London Evening Standard as a drama critic and arts editor and at the Financial Times as Arts & Books editor. She was the founding editor of The Guardian‘s literary supplement, The Guardian Review. McAfee has edited a collection of literary profiles from The Guardian titled Lives and Works and is the author of eight children’s books. She has been a judge of the Orange Prize for Fiction, the South Bank Show Awards and the Ben Pimlott Prize for political writing. She lives in London with her husband, the writer Ian McEwan.

“Rich and layered, passionate and sly…I am filled with admiration for this novel.”—James Magnuson, author of Famous Writers I Have Known

“An impressive achievement . . . It shines a light on an artistic scene which produced some of Scotland’s greatest poets of the last century.”—Will Gore, Evening Standard

1. What was your experience of engaging with the different forms of writing—scholarly excerpts, poetry, journal entries, appendices, etc.—that comprise this novel? How did the entirety and mystery of Grigor McWatt’s identity unfold as you read these different documents?

2. Discuss your impressions of Mhairi over the course of the novel—did they change as her personal and professional lives shifted course along the way? How did the intimacy and honesty of her journal affect your relationship with her?

3. Mhairi describes her journal as “a public, online, real-time account of my mental and physical disintegration” (pages 44-45). What does this suggest about the expectations she has of her own voice/identity in her published work vis-à-vis how McWatt so carefully stylized and crafted his writerly persona in the Compendium and elsewhere?

4. How does the novel explore the relationship between the past and present through written documents and archives? What about McWatt’s work and identity—including his interpretations of great poets’ works—suggest a confluence of time in art that can’t necessarily happen in life?

5. Similarly, how does the book play with the boundaries between fact and fiction? Were there points when you believed McWatt to be real? What elements contributed to the authenticity of his account and Mhairi’s pursuit of his life?

6. How would you describe Mhairi’s internal debate about her inability to confront her feelings head-on versus her ability to be consumed by her work? What effect does that have on the balance in the novel’s focus between her personal journals and other kinds of writing? How is her voice different when she’s writing in the first person compared with as an academic?

7. McWatt’s different love interests dovetail with the end of Mhairi and Marco’s marriage. Did it surprise you how close she became to McWatt despite her desire to distance herself from her husband, even to the extent of moving across the Atlantic Ocean? How do these two men in their own ways similarly compel her to achieve and pursue her own career?

8. What did you think was the true cause of Mhairi and Marco’s separation? How did their different passions first work in favor of their relationship, and then against it?

9. Discuss Agnes’s role in Mhairi’s plight. How do her responses to her parents’ breakup—her isolation in school, and her relentless sense of inquiry and curiosity—both distract and ground Mhairi while she and Agnes are on the island? What do the two learn from each other during the course of the novel, and how does Agnes function as her own character? Are mother and daughter more similar or different in the end in terms of their respective passions, and in how they greet Marco in the final scene?

10. What does Mhairi sacrifice in her relationship with Agnes to pursue her various affairs—first romantically with Pascal, then intellectually with McWatt? Are there ramifications for her self-interest, and what parallels are there between those choices and some of McWatt’s?

11. What do Mhairi’s and McWatt’s respective work/personal lives suggest about the thrill of novelty versus the steadiness of what’s familiar and good? How do they each resist the familiar in their lives in their choices and in their identities? What does looking at them together in the space of the novel, a shared (auto)biography, help illustrate about the risks one takes for art and the pursuit of fame?

12. Discuss the significance of the various “inventories” throughout the book—of flora and fauna, Scots words for weather and tools, the glossary, bibliography, appendices of recipes and music, etc. Did you feel these disparate lists were effective in helping you get a sense of McWatt’s Scotland: did they make up a true “Fascaray Compendium,” and how does Mhairi’s experience on the island fit into the novel’s “compendium”?

13. Toward the end of the novel, politics becomes increasingly important in McWatt’s work. Did you notice any parallels in his plight with other artists’ who affected larger social change, historically or in a more contemporary context? In your mind, who might have been an inspiration for McWatt’s character and legacy in the novel?

14. McWatt writes “Transparency. Lucidity. This is a service we Scots can perform” (page 402). How does he perform such a service in his work, or claim to? What did the reveal of his real past by his sister do to complicate this claim?

15. What made McWatt’s song so compelling across generations and nationalities? How does his devotion to “hame”—home—stand up even in light of the truth of his birth country? What does his legacy, and Mhairi’s role in perpetuating it with A Granite Ballad, suggest about the legitimacy of a self-constructed identity and home? Can you relate to this impulse in your own family and/or life?