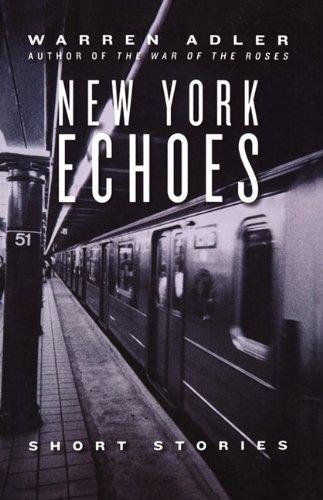 Acclaimed author Warren Adler focuses his laser eye on New York City in these 22 deftly crafted and compelling short stories. New York, the frenetic, tough-minded, generous-hearted city, magnet for people’s hopes and aspirations, is as vividly and lovingly portrayed here as any of the characters.

As in his celebrated novels, Adler’s themes in New York Echoes deal primarily with intimate human relationships-the mysterious nature of love and attraction, the fragile bonds between husbands and wives, and parents and children;

Acclaimed author Warren Adler focuses his laser eye on New York City in these 22 deftly crafted and compelling short stories. New York, the frenetic, tough-minded, generous-hearted city, magnet for people’s hopes and aspirations, is as vividly and lovingly portrayed here as any of the characters.

As in his celebrated novels, Adler’s themes in New York Echoes deal primarily with intimate human relationships-the mysterious nature of love and attraction, the fragile bonds between husbands and wives, and parents and children; the divide between generations; the obsessive pursuit of the creative artist and the emotional toll it exacts. In these stories, past memories collide with present realities; with first love comes first betrayal; chance encounters have unexpected consequences; and the devastating impact of 9/11 refuses to fade, wreaking havoc years after the tragedy.

All of the hallmarks of Warren Adler’s fiction are everywhere in evidence in New York Echoes, in powerful stories that reflect a special understanding of the human condition as seen through the eyes of one of America’s most prolific authors. Above all, these radiant tales are a celebration of the short story and of an author’s return to his much-loved, dearly missed native city.

Warren Adler, a native New Yorker, is the author of 24 critically acclaimed novels and 4 short story collections. Born and raised in Brooklyn, Adler is a proud product of the New York City public schools. He graduated from NYU and studied creative writing at The New School. Adler happily lives in New York City, after a 40-year absence from his native soil.

“Warren Adler writes with skill and a sense of scene.” —The New York Times Book Review

“Adler is a skilled fictioneer; his plot turns are inventive, and his true-to-life dialogue helps identify each character— all of whom engage readers’ emotions one way or another.”
—Publishers Weekly

“Warren Adler has a fine ear for dialogue and a remarkable ability to plumb the depths of human obsession.” —Nelson DeMille

Does one get the sense after reading these stories that New York City is a land unto itself, circumscribed by its own mores, habits, and attitude than the rest of the country?

Of all the stories in the book, which one resonated the most to you?

There are a number of stories that deal with parents and grandparents like “The Cherry Tree” and “Oral History” and the divide between the generations. Do you believe this divide is growing more so than in previous generations?

A number of these stories like “My Father, The Painter” deal with the obsessive needs of the creative artist where the pursuit of one’s art trumps all human relationships. Is the artist justified in pursuing such a single-minded pursuit?

Some of these stories like “Good Neighbors” and “The Mean Mrs. Dickstein” deal with coping with living in close proximity to others in a bustling, frenetic, high-energy city. How do you cope with this phenomenon in your daily life?

As the story “The Obituary Reader” implies, guilt and shame for past actions magnifies itself as time goes on. Do you believe that time enhances or blunts such feelings?

The pursuit of celebrity through show business is passion that apparently brooks no hardship. In the stories “Actors” and “Better Than Donna Reed,” one confronts the reality of this hardship. Is it worth the candle?

The story “A Dad Forever” deals with the irrelevance of a parent to a grown child. Do you believe this is an accurate portrayal?

Memories of young love and passion permeate a number of stories in this collection, as in “A Love Story.” Do you believe that such early experiences of love and sex are as endurable and powerful as portrayed?

There are a number of stories like “A Birthday Celebration” that deal with loss and loneliness. Do you believe that living in a crowded city like New York enhances such feelings?

Stories like “I Can Still Smell It” and “That Horrid Thing” deal with the trauma of 9/11 and how it continues to impact people’s lives. Although more than six years have passed since that traumatic event, does the anxiety and fear engendered by it still generate the same amount of anxiety and worry as it did immediately after the event?

In the story “Epiphany” latent and hidden cultural anti-Semitism rears its ugly head in a divorce dispute. Do you think it will ever be possible to erase this hateful strain that afflicts the human psyche?

In the “Dividing Line” and “Oral History” fading generational memory is explored. How much does historical memory really matter?

Because the author is a father, it is natural that a number of the stories deal with fatherhood and its consequences. Do you think this has been a neglected topic in recent fiction?

The short story, once a staple of reading formats, has experienced a decline in recent decades because of its elimination from magazine content. The Internet is now responsible for an upsurge in interest in short imaginative fiction. Do you believe the short story format is now on the upswing?

Would you like to see another volume of short stories dealing with life in New York City?