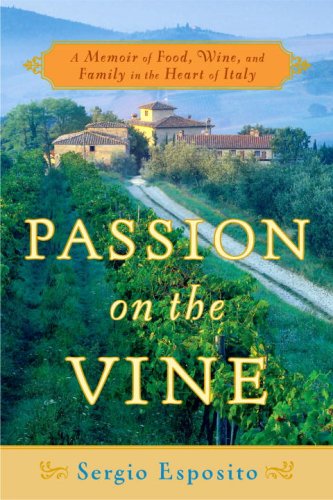 PASSION ON THE VINE

A Memoir of Food, Wine, and Family in the Heart of Italy

Infused with captivating images of a Neapolitan boyhood and a career devoted to the incomparable wonders of Italian wine, Passion on the Vine is an enchanting love letter to a singular destination, written not by an outsider but by one of its most devoted sons. This is the story of a boy who grew up relishing the fresh ingredients of his family’s table and was given thimblefuls of Sangiovese mixed with water. Herbs, cheeses, wild game, and vegetables were all available from local vendors and cooked with a reverence for fresh flavors. When he emigrated to New York with his family,

Infused with captivating images of a Neapolitan boyhood and a career devoted to the incomparable wonders of Italian wine, Passion on the Vine is an enchanting love letter to a singular destination, written not by an outsider but by one of its most devoted sons. This is the story of a boy who grew up relishing the fresh ingredients of his family’s table and was given thimblefuls of Sangiovese mixed with water. Herbs, cheeses, wild game, and vegetables were all available from local vendors and cooked with a reverence for fresh flavors. When he emigrated to New York with his family, such simple splendors became nothing more than a memory in a world where large portions of bland, processed food reigned, and Italian wine was dismissed as inferior.

Sergio Esposito has spent the rest of his life traversing two worlds, and American wine lovers rejoice because of it. Now the nation’s most revered authority on the vintners of Italy, with a business that attracts thousands of high-profile clients to his Manhattan store, Esposito takes us with him on his lively buying trips to his homeland. In chapters that blend poignant memories and hilarious family anecdotes with the poetic, sensual beauty of Italy’s old-world fields, Passion on the Vine introduces us to the artisans who cherish traditional fermentation methods and have elevated Italian wines to the world-class status they deserve.

True to his pioneering character, Esposito has produced a unique book that defies categorization. A tender family saga, an inspiring tale of immigrant success, a captivating armchair-travel experience that whisks you to locales that even most Italians are barred from entering, this intoxicating memoir yields much for your reading group to savor.

Sergio Esposito is the owner of Italian Wine Merchants in New York City. He speaks at and hosts wine dinners throughout the country, has a much-visited Web site, and writes a popular e-mail newsletter about his discoveries and travels in Italy. He lives with his wife and two children in New York City.

“Without qualification, the best book about Italian wine today, if only because Sergio Esposito understands that its mysterious greatness is in its poetry—the earth, its diurnal magic, the ghosts of great-grandfathers. A beautiful, boldly sentimental memoir.”
—Bill Buford

“Passion on the Vine is a spellbinding memoir; a vivid, funny, and, yes, passionate tale of family, food, and wine. The tour de force chapter on his childhood in Naples will make your wish you were Italian. Sergio Esposito is not only a great epicurean—he’s also a great storyteller. If he ever gets tired of selling wine he’s got a bright future as a writer.” —Jay McInerney

“Esposito’s glass is always half-full, when not filled to the brim, and always with something beautifully red and swirling and passionate, as are his words in this wine-adventure, story-memoir. His words are like the vines he so ardently writes about—earthy, deep-rooted; and the wines—perfect on the tongue, with a long finish.” —Frances Mayes

“Do not read this book on an empty stomach….A charming tribute to food, drink, and homeland.” —Kirkus Reviews

Discuss the title, Passion on the Vine. What does it take to develop a passion for a life’s work, or for an indulgence? What sparked Esposito’s passion for wine?

What did the opening scenes help you discover about the realities of the wine trade? How did these passages compare to the rosy images that travel writers so often use to begin their books? In what way do Esposito’s direct, sometimes gritty depictions only enhance the experience of his writing?

How would you characterize the dynamics of Esposito’s family? How was he influenced by his family stories of war and of a fallen aristocracy? What makes his brother, Sal, his best associate on buying trips? How do Esposito’s interactions with his wife compare to the families of his parents’ generation?

In the first chapter, Esposito describes his disappointment in discovering that a local restaurant no longer served traditional, regional cuisine. “It’s too tough,” restaurateur Ernesto Iaccarino says. “Reviewers want you to have the food they’re accustomed to, and they’re usually accustomed to French stuff. They want modern touches. They want the foams, the unorthodox flavor combinations. We give them what they want so that we can survive.” How has the power of critics grown in other fields as well? Is there a disconnect between the food and wine that critics praise and the choices that personally please you?

Esposito describes the mournful scene of his family’s departure for America at the end of chapter two. Previously, he had described a life centered around close-knit communities and magnificent food made from fresh ingredients, cooked at their peak of flavor. What were the costs and benefits of the Espositos’ departure from Naples? How might his parents characterize their immigration? Why might they find their Arizona condo more appealing than their homeland?

What role does wine play in Italian culture? What does the author mean when he writes that “Italian wine, like Italian food, is simultaneously no big deal and the biggest possible deal”? What is the significance of his observation that in his family, the goal of drinking wine was not to become drunk? Are American attitudes and laws regarding alcohol unhealthy?

Discuss Esposito’s tragicomic memories of life in Albany. How did Zio Aldo, alongside Esposito’s reticent father, serve as a model for how to be (or not to be) an ideal man?

What made Esposito the perfect candidate to become San Domenico’s sommelier? What was revolutionary about Tony May’s approach to being a restaurateur?

Chapter six describes the spectacular meal during which wines of master vintner Guiseppe Quintarelli were consumed. Esposito describes them as “a mellow symphony,” attributed to the appassimento method in which grapes are dried, an extraordinarily risky process. “Why his wines are so remarkable has never been determined. In the lab, scientists have re-created the environment of his small working farm. … And they’ve never made anything close to a Quintarelli.” To what do you attribute the success and complexity of wines from winemakers such as this? What common denominator seems to exist among all of the legendary wineries Esposito reveres?

What did Josko Gravner’s experience with cutting-edge technology say about the current schism between purists who see wine as a natural process and those who scorn ancient methods? Which would you prefer if you were to try to enter this business?

What cultural differences did you detect when Esposito and his wife crossed the border to call on Slovenian winemaker Ales Kristancic? What is symbolic about his sediment-laden bottles of Puro?

Chapter eight describes Esposito’s bungled introduction to Maurizio Anselma and his ensuing association with the greats of Barolo, including Bartolo Mascarello, who led Esposito to conclude that “the value of a great wine … lies within the fact that you can never understand or master it,” a realization that caused the author to leave behind his whiz-kid mentality. In which American circles is this sense of ambiguity and wonder appreciated? Among what kinds of aficionados does the “whiz kid” prevail?

Does Luca Maroni, the radical modernist featured in chapter nine, have a future? How would the world’s perceptions of wine change if his algebraic formula and his argument against aging proved to be effective?

One distinction between the history of French and Italian wines is marketing. How did the winemakers Esposito depicts in Passion on the Vine respond to the need to market themselves? How is image both an asset and a hindrance to artisans?

What will you take with you from the story of Esposito’s meeting with Gino Veronelli, and the wines consumed in the aftermath of the vineyards razed by Prince Alberico Boncampagni Ludovisi? What do Esposito’s observations in his epilogue regarding the Prince’s methods say about contemporary attempts to define “traditional”?

In the book’s closing paragraph, Esposito observes the transformation of American impressions of Italians, from the early twentieth century image of “desperate hungry immigrants” and “a fascist state they’d fought against.” What does the twenty-first century promise in terms of American attitudes toward Europe in general and Italian exports specifically?

How has your own experience of wine changed throughout your lifetime? What transformations have you detected in the American marketplace for wines? What are the traits of your favorite wines? How has Esposito affected your approach to choosing and enjoying Italian selections?