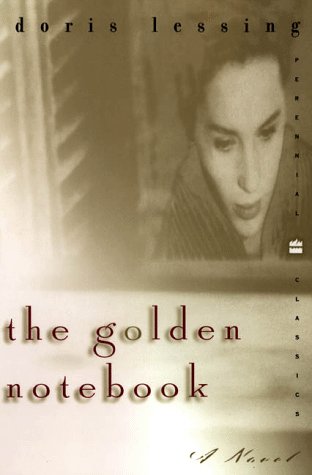 “Knowing was an ‘illumination.’ During the last weeks of craziness and timelessness I’ve had these moments of ‘knowing’ one after the other, yet there is no way of putting this sort of knowledge into words. Yet, these moments have been so powerful, like the rapid illuminations of a dream that remain with one waking, that what I have learned will be part of how I experience life until I die.” —Anna Wulf in The Golden Notebook

“The two women were alone in the London flat.”

“Knowing was an ‘illumination.’ During the last weeks of craziness and timelessness I’ve had these moments of ‘knowing’ one after the other, yet there is no way of putting this sort of knowledge into words. Yet, these moments have been so powerful, like the rapid illuminations of a dream that remain with one waking, that what I have learned will be part of how I experience life until I die.” —Anna Wulf in The Golden Notebook

“The two women were alone in the London flat.”

So begins Doris Lessing’s most famous novel, published in 1962, and now considered one of the major works of twentieth-century literature. It is the story of Anna Wulf, a writer and single woman, who lives with her young daughter in a flat, occasionally renting out a room, less for the income than out of a reflex of social obligation. Laboring against a writing block, following the immense success of her autobiographical debut novel about a group of Communists in colonial Africa, Anna struggles to find a way to integrate the multiple selves that fragment her personality and make her life unbearably painful.

Out of “fear of chaos, formlessness—of breakdown,” she decides to keep four notebooks, one for each component of her life—black for her experiences in Africa, red for current politics, yellow for a fictionalized version of herself, and blue for a diary. Although framed by a conventional novel called Free Women, the point of the novel, according to Lessing, is the “relation of its parts to each other.” By viewing her life from these different angles, going over her experiences, gauging her responses, and carefully probing her intertwined layers of consciousness, Anna eventually manages to unify her identify in one notebook. As she does so, she comes to terms with her growing disillusionment with communism, the trauma of emotional rejection and sexual betrayal, professional anxieties, and the tensions of friendship and family.

Doris Lessing was born in Persia (now Iran) in 1919. Lessing has described her childhood as an uneven mix of some pleasure and much pain. Her mother, obsessed with raising a proper daughter, enforced a rigid system of rules, then installed Doris in a convent school and, later, an all-girls high school in Salisbury, from which she soon dropped out at the age of thirteen. Lessing, however, made herself into a self-educated intellectual, reading Dickens, Kipling, Tolstoy, and Dostoevsky. Doris’s early years were spent absorbing her father’s bitter memories of World War I, taken in as a kind of “poison.” “We are all of us made by war,” Lessing has written, “twisted and warped by war, but we seem to forget it.” Lessing left home when she was fifteen and took a job as a nursemaid. Her employer gave her books on politics and sociology; she was also writing stories, and sold two to magazines in South Africa.

In 1937, she moved to Salisbury (Southern Rhodesia), where she worked as a telephone operator and, at nineteen, married Frank Wisdom and had two children. A few years later, feeling trapped in a persona she feared would destroy her, she left her family, remaining in Salisbury. She was drawn to the members of the Left Book Club, a group of Communists. Gottfried Lessing was a central member of the group; shortly after she joined, they married and had a son. During the postwar years, Lessing became increasingly disillusioned with the Communist movement, which she left altogether in 1954. By 1949, Lessing had moved to London with her young son and published The Grass is Singing, beginning her career as a professional writer. After writing the Children of Violence series, about the growth in consciousness of her heroine, Martha Quest, Lessing broke new ground with The Golden Notebook (1962), a daring narrative experiment. Her most recent works include two volumes of autobiography, Under My Skin (1994) and Walking in the Shade (1997), and a novel, Love, Again (1995).

By the winner of the 2007 Nobel Prize for Literature

“The Golden Notebook is Doris Lessing’s most important work and has left its mark upon the ideas and feelings of a whole generation of women.” — Elizabeth Hardwick, New York Times Book Review

“Lessing writes about her own sex with the unrelenting intensity of Simone de Beauvoir, and about sex itself with the frankness and detail of John O.” — Washington Post

“The most absorbing and exciting piece of new fiction I have read in decades; it moves with the beat of our time, and it is true.” — Irving Howe, New Republic

Lessing has written that the central theme of The Golden Notebook is of “‘breakdown, that sometimes when people ‘crack up’ it is a way of self-healing.” In what ways does this theme find expression in the novel? How does Anna Wulf try to deal with her inner self-divisions? What part is played by each of Anna’s four notebooks in her struggle to integrate her fragmented inner world and personality? What enables the notebooks to come together in the golden notebook at the end of the novel? How do her relationships to others, especially to Saul Green, contribute to her “crack-up” and “self-healing”?

By embedding Anna Wulf’s psyche in the social and political movements of her time, Lessing suggests that the individual is inevitably shaped by history. In what ways is Anna Wulf a creation of the culture in which she lives—personally, politically? Why does she become disillusioned with communism and revolutionary psychoanalysis? How is her life entangled with culturally endorsed ideas about romantic love? sex? family? friendship? normalcy?

Many women consider The Golden Notebook to be the founding novel of the women’s movement. Yet the ironically titled novel-within-the novel, Free Women, seems to raise questions of “freedom.” What do you feel the novel is saying about women’s lives and desires? How do individual characters—Anna, Molly, Marion—reflect various kinds of women’s struggles? Does the novel offer any vision of freedom for women, and if so, what is it?

Why is Anna blocked as a writer? What are the inner and outer pressures that seem to inhibit her as an artist? How do her discussions with Mother Sugar and Saul Green illuminate her problem? How do her shifting feelings about the power of “naming” to alleviate psychic pain relate to her writing?

Do you think that the novel takes an unrelentingly bleak view of relations between the sexes? Or is there the suggestion of an alternative to the cruelty, betrayal, and emotional numbness that seem to characterize sexual relations in the novel? Do Anna’s relationships with men change over the course of the novel (consider Willi, Michael, Saul, Milt)? Why does Molly decide to marry at the end? What do you think is suggested by the novel about Anna’s future?

Anna, like her friend Molly, is a divorced mother, rasing a child on her own while struggling with other aspects of her life—professional, political, sexual. How would you describe Anna’s relationship with her daughter, Janet? How does she feel about herself as a mother? What is your reaction to Richard, and his criticism that Anna and Molly are “bad” mothers—responsible, for one thing, for Tommy’s attempted suicide? What does the character of Marion contribute to the novel’s commentary on motherhood?

How does the form of the novel—the frame, the conventional short novel, Free Women , broken up by stages of Anna’s four notebooks of different colors (black, red, yellow, and blue), and eventually unified in the golden notebook—relate to some of the larger themes of the novel? What does the form suggest about an individual’s layers of consciousness? What is the significance and effect of filtering the world through a woman’s point of view?