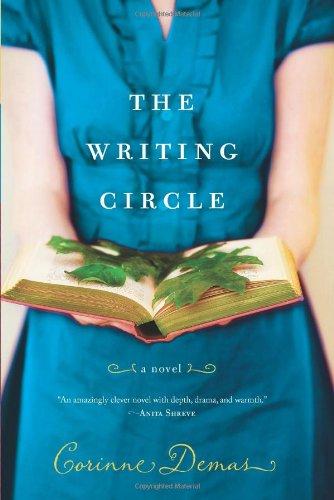 Nancy writes medical newsletters for a living, but she’s begun to write a novel. Her book is based loosely on an important decision her father made in his youth, one that shaped his character from that point on, and also influenced his daughter as she made decisions about the course of her own life. This isn’t just a story she wants to write; it’s a story she must write, to honor her father and to work through her grief over his death.

So when she’s asked to join a writing group consisting of several prominent authors,

Nancy writes medical newsletters for a living, but she’s begun to write a novel. Her book is based loosely on an important decision her father made in his youth, one that shaped his character from that point on, and also influenced his daughter as she made decisions about the course of her own life. This isn’t just a story she wants to write; it’s a story she must write, to honor her father and to work through her grief over his death.

So when she’s asked to join a writing group consisting of several prominent authors, she swallows her reservations about her own talent and brings the first chapter of her novel to share. She has reason to be intimidated: Gillian is a reputed poet rumored to be a contender for a Pulitzer; Chris earns his living writing thrillers; Bernard and Virginia—once married but now amicably divorced—are both scholars, and a biographer and historian, respectively. Only Adam, the youngest member of the group and an aspiring novelist, shares Nancy’s lack of literary reputation, but his evident ability has kept him a member of this elite group, the Leopardi Circle.

While Nancy is officially welcomed into the group, it’s not the most comfortable fit. Gillian, in particular, seems both amused by Nancy’s presence and piqued that the newest member is less than willing to take her proffered advice. Chris, too, makes it known that he might have preferred a different kind of writer to join their ranks. And the Leopardi Circle has its secrets: romantic entanglements and professional and personal betrayals threaten to disrupt the group’s concord almost as soon as Nancy has joined. Nancy, in particular, will not emerge from their meetings unscathed.

In alternate chapters told from the perspective of each character, The Writing Circle is a novel that plumbs the literary world and exposes its pretensions and imperfections while also examining basic human nature and its impulses and desires. The narrative moves quickly and convincingly before coming to its stunning and unexpected conclusion. In this way, Corinne Demas’s novel is part mystery, part romance, and part poem, examining with grace and skill the risks we take when we share ourselves professionally and personally.

Corinne Demas is the author of Eleven Stories High: Growing Up in Stuyvesant Town, 1948–1968, a memoir; two collections of short stories; a collection of poems; and numerous books for children. She has been the recipient of two National Endowment for the Arts Creative Writing Fellowships as well as an Andrew W. Mellon Fellowship. A professor at Mount Holyoke College and a fiction editor of The Massachusetts Review, she divides her time between Western Massachusetts and Cape Cod. She has belonged to several writing circles.

“An amazingly clever novel with depth, drama, and warmth. The characters are so sharply drawn, they will stay with you long after you’ve reluctantly put down this beautifully rendered tale.”
—Anita Shreve, author of The Pilot’s Wife

“If you think you’ve got a novel in you, The Writing Circle is the book for you. But even if you don’t, even if you just love reading a compelling story narrated with wit and charm, that is sad and funny by turns, and populated by characters whose moral struggles are more profound than they know, this novel will leave you completely satisfied. The Writing Circle is a reading treat. I couldn’t put it down.”
—Valerine Martin, author of The Confessions of Edward Day

“Through its artful use of multiple voices, its memorable characters and elegant prose, The Writing Circle weaves a web that tightens slowly around you as you read until you find you simply can’t put it down. This is a wonderful book, tense, engaging, and highly recommended.” —Karen Joy Fowler, author of The Jane Austen Book Club

What did you think of the novel’s structure? What were the benefits of receiving the story via alternating chapters from the perspectives of several characters? What were some of the drawbacks?

One of the novel’s main subjects is fidelity. Discuss what Demas is saying about fidelity via her characters and their actions—not just concerning sexual relationships, but with regard to friends, family, peers, and one’s sense of self. In particular, examine the lives of the members of the Leopardi Circle and the role fidelity plays in each of their lives.

Discuss jealousy as a subject of the novel, and the comment Demas is making about the nature of jealousy in our lives. How many kinds of jealousy are in evidence here? Is there any jealousy that might be considered healthy?

Which character or characters appealed to you the most, and why? Whose perspective did you sympathize or identify with the least?

Consider the homes of the characters and the way they echo the various personality traits of their owners. What did each home reveal about its owner? How, too, was the landscape used to parallel or reveal aspects of each character’s emotions?

Would you label Gillian a sociopath? Consider her behavior throughout the novel—is she consistently self-serving and remorseless? Does she have any redeeming qualities? In particular, discuss the last chapter, when it’s revealed that she doesn’t love anyone, but that she believes she came closest to loving Paul. Is there any irony in a poet being an amoral person?

Compare and contrast Gillian’s character to that of Nancy, and discuss how the two women work as opposites or counterparts, morally, professionally, and emotionally.

Fatherhood is another important subject in the novel. Compare and contrast Chris’s actions and attitude toward being a father with Bernard’s, who becomes a father again very late in life. Discuss both men in light of Nancy’s father, who is held up as a superior example. What does this novel reveal about men and their roles in the lives of their children?

Were you surprised to discover that Gillian had plagiarized Nancy’s novel? Do you believe Gillian truly didn’t think she had stolen Nancy’s work? What was your reaction when you learned that Gillian had slept with the professor who accused her of plagiarizing her senior thesis?

Similarly, did the end of the book surprise you? What parts of the book, aside from the preface, point to this conclusion? Was the ending a satisfying resolution to the novel?

Discuss how the preface shaped your reading of the novel as you made your way through the book—were you thinking about the possible car accident?

Giacomo Leopardi, from whom the members of the writing circle took their name, was a nineteenth-century Italian Romantic poet who wrote about the misery and suffering of the world. How might his name contribute some symbolism to the book, then, based on the lives of its characters?