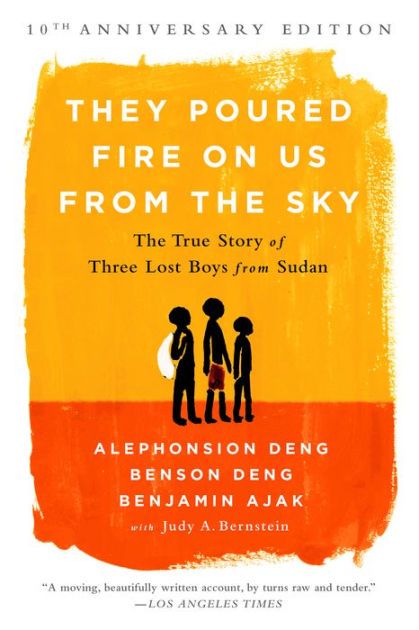 THEY POURED FIRE ON US FROM THE SKY

The True Story of Three Lost Boys from Sudan

Benjamin, Alepho, and Benson were raised among the Dinka tribe of Sudan. Their world was an insulated, close-knit community of grass-roofed cottages, cattle herders, and tribal councils. The lions and pythons that prowled beyond the village fences were the greatest threat they knew.

All that changed the night the government-armed Murahiliin began attacking their villages. Amid the chaos, screams, conflagration, and gunfire, five-year-old Benson and seven-year-old Benjamin fled into the dark night. Two years later, Alepho, age seven, was forced to do the same. Across the Southern Sudan, over the next five years, thousands of other boys did likewise,

Benjamin, Alepho, and Benson were raised among the Dinka tribe of Sudan. Their world was an insulated, close-knit community of grass-roofed cottages, cattle herders, and tribal councils. The lions and pythons that prowled beyond the village fences were the greatest threat they knew.

All that changed the night the government-armed Murahiliin began attacking their villages. Amid the chaos, screams, conflagration, and gunfire, five-year-old Benson and seven-year-old Benjamin fled into the dark night. Two years later, Alepho, age seven, was forced to do the same. Across the Southern Sudan, over the next five years, thousands of other boys did likewise, joining this stream of child refugees that became known as the Lost Boys. Their journey would take them over one thousand miles across a war-ravaged country, through landmine-sown paths, crocodile-infested waters, and grotesque extremes of hunger, thirst, and disease. The refugee camps they eventually filtered through offered little respite from the brutality they were fleeing.

In They Poured Fire on Us From the Sky, Alepho, Benson, and Benjamin, by turn, recount their experiences along this unthinkable journey. They vividly recall the family, friends, and tribal world they left far behind them and their desperate efforts to keep track of one another. This is a captivating memoir of Sudan and a powerful portrait of war as seen through the eyes of children. And it is, in the end, an inspiring and unforgettable tribute to the tenacity of even the youngest human spirits.

Alephonsian and Benson Deng and their cousin Benjamin Ajak left the Sudan in 1987, and were relocated in 2001 from the Kakuma refugee camp in Kenya to the United States as part of an international refugee relief program. Today, Alephonsian Deng attends San Diego City College and works in the Medical Records Department at Kaiser Permanente Hospital. He has spoken to many schools, universities, clubs and organizations about his extraordinary story in Africa and adapting to his life here in America. Benson Deng runs the computer and digital photography system at Waste Management in El Cajon, CA. Benjamin Ajak resides in San Diego and speaks full time to organizations and schools, sharing his amazing life and insights into surviving as a child of war and a newcomer to the U.S. Judy Bernstein is a mother, writer, Student Advisor for the Community Economic Development Department at San Diego State University, volunteer mentor and Chair of the Advisory Committee of the San Diego International Rescue Committee and co-founder of the IRC Lost Boys Education Fund. She speaks with her co-authors to community groups, temples, churches, and schools.

“[The authors’] accounts, written first in lesson books and then on computer have been skillfully put together in a narrative, each boy carrying both history and that of their joint flight and reunion forward. The result is both fascinating and immediate, not least because of the guilelessness of the language and the particularly African use of metaphor and imagery….They Poured Fire…conjures up a world of marabou storks, acacia trees, termite mounds taller than men, scorpions and snakes that move in the dark, a world governed by traditions, rituals, seasons, weather, and obligations.”—New York Review of Books

“[T]ender and lyrical…one of the most riveting stories ever told of African childhoods—and a stirring tale of courage….Anyone interested in Africa, its children or the human will to survive should read this book. This beautifully told volume…will remain on my desk for years to come.”—Washington Post

1. What do Judy Bernstein (who introduces the book) and her son find most striking about Benson, Alepho, and Benjamin when they arrive in San Diego? What would be your own reaction if you were meeting the boys during their first few days in America? Would you find it frustrating? Exciting? What advice would you give the boys’ for adapting to American society?

2. What did you find most troubling about the boys’ experiences? Which moments struck you as particularly emotionally moving? Why?

3. How do the voices of Benson, Alepho, and Benjamin differ? How are they similar? Do they have distinguishing characteristics? Was there a writer who you felt most connected to?

4. Benson asserts that hunger “makes you like a wild animal.” While enduring years of starvation, how do the boys maintain their humanity? If you were involved in a similarly desperate situation, what would you do to preserve your compassion?

5. Why was education so important to the boys—especially to Benson? How does the boys’ desire to learn compare to young people in America who you know?

6. Benson and Alepho have heard some outlandish rumors about America. What were they, and what perhaps inspired their formation? Are there countries or cultures that we make similarly misinformed judgments about today?

8. During their journeys, Benson, Alepho, and Benjamin each meet many people—some fellow refugees and some not. Which of these secondary characters have the most influence on the writers’ stories? Which leave the strongest impressions on you?

9. How do you think the boys’ age and lack of guardians affected their travels? Was it always to their detriment? How might their experiences have been different had the boys been older?

10. How do the refugees help each other despite living in confining environments of absolute poverty? How do they manage to assert some control over their own lives?

12. The efforts of aid groups like the UN are sometimes a mixed blessing to the refugees. Why is this? What do you think could be done so that their influence would be wholly helpful?