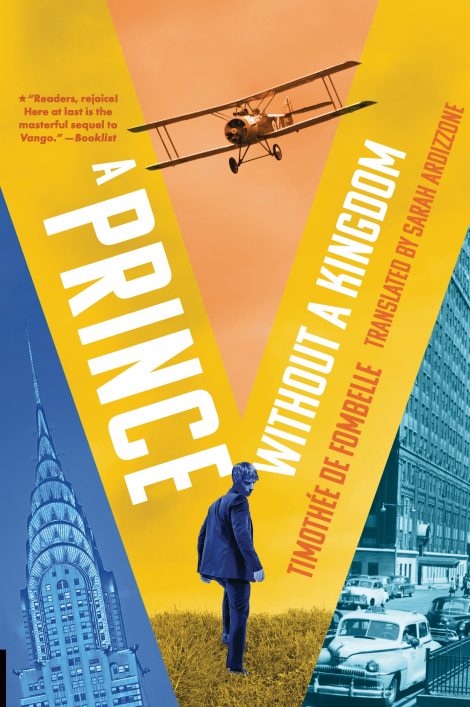 A PRINCE WITHOUT A KINGDOM

Fleeing dark forces and unfounded accusations across Europe in the years between World Wars, a young man named Vango has been in danger for as long as he can remember. He has spent his life running along rooftops, fleeing to isolated islands, and evading capture across Russia, Paris, New York, and Italy. Narrow escapes, near misses, and a dash of romantic intrigue will rivet adventurous teens to their seats as Vango continues to unravel the mysteries of his past.

Fleeing dark forces and unfounded accusations across Europe in the years between World Wars, a young man named Vango has been in danger for as long as he can remember. He has spent his life running along rooftops, fleeing to isolated islands, and evading capture across Russia, Paris, New York, and Italy. Narrow escapes, near misses, and a dash of romantic intrigue will rivet adventurous teens to their seats as Vango continues to unravel the mysteries of his past. In the shadow of a rapidly changing world, can Vango find those who have hunted him for so long and uncover his true identity?

Timothée de Fombelle is a popular French playwright who has achieved international success as a novelist with his debut, Toby Alone, and its sequel, Toby and the Secrets of the Tree. He has worked as a teacher and in 1990 set up his own theater company. Timothée de Fombelle lives with his family in Paris.

Sarah Ardizzone has won several awards for her translation work, including the Marsh Award for Children’s Literature in Translation for Toby Alone by Timothée de Fombelle and for Eye of the Wolf by Daniel Pennac. She lives in London.

“de Fombelle spreads out hints and clues like pieces of an intricate clockwork, and although the audience might catch satisfying glimpses of what fits where, the pleasure lies in watching the author deftly assemble minutiae into a glorious whole.” – Bulletin of the Center for Children’s Books (starred review)

“The action is brilliantly operatic as it moves from country to country and from continent to continent. The story runs from 1936 through 1942, which means that it is touched by WWII and the German occupation of France, where meaningful portions of the story are set. But whatever the setting, the story is rich in mysteries, enlivened by surprises, and suffused with suspense. It is so beautifully wrought it reminds us why we love to read, and there can be no higher praise.” —Booklist (starred review)

“This sequel is characterized by the same beautiful writing and intricate plotting that made the first so gripping. Mournful at times but also illuminated with moments of humanity and grace: a worthy sequel.” —Kirkus Reviews

“A cinematic, quickly paced, and clever page-turner, with an adventurous, romantic aura.” —The Horn Book

An Encounter in the Sky: Vango and Ethel

The rectangle of crumpled corn was their hideout.

They were lying next to each other, draped in the gold of the  crop. All around them, fields stretched as far as the eye could see,proud and tall beneath the sun. The airship on the ground was just visible, a few kilometers off, like a shimmer of silver in the grass.

She was twelve perhaps, and he fourteen. She had run after him through the corn, which had closed up again behind them.

She had followed, without the faintest idea of where he was heading. Now they were huddled on the ground, face-to-face, and she was crying.

“Are we hiding? Why do we have to hide?”

Not even the ears of grain rustled. Complete silence, except for a sustained summer note, a deep note you might call the sound of the sun. Vango had a crazed look in his eyes.

The parched earth soaked up the traces of her tears.

“There’s nobody here. I don’t recognize you anymore, Vango. What is the matter?”

Ethel had only known Vango for three weeks, but it seemed to her as if their meeting was the beginning of everything and that in her entire life she had never really known anybody else. Three weeks had been like a small eternity together. Hadn’t they traveled all the way around the world?

They had even forgotten about the other passengers on board the Graf Zeppelin, the crowds that gathered at each stop-off, the newspapers reporting on the great airship’s adventure, the magnesium flashes from the cameras falling over them like a shower of white rain.

In their hearts, it had been just the two of them flying: from New York to Germany, and then nonstop to Japan. After five days let loose in Tokyo, they had crossed the Pacific in three days, flown over the bay of San Francisco at sunset as part of a flotilla of small aircraft, been given a standing ovation in Los Angeles and Chicago, and finally landed at Lakehurst, near New York.

Enough for at least one lifetime. Or perhaps for two lives joining together?

“Please,” she whispered, “tell me what you’re frightened of. Then I can help you.”

Once again he put his hand over Ethel’s mouth. He had just heard a clicking sound, like a weapon being loaded.

Ethel rolled over onto her back.

Three weeks earlier, they had been strangers. They had met in the skies above New York, on the first night of their voyage. Ethel wished she could be back there, reliving it all, second by second, beginning with the first words, “Don’t you ever speak?”

She had said nothing, of course, which had been her response to every question for the past five years. She was leaning against the window, holding a glass of water. They were one hundred meters above the tallest skyscrapers. The vertical night sparkled below them.

She wasn’t interested in the person who was talking to her.

“I was watching you with your brother,” he had remarked. “You never say anything. But he’s very good at looking after you.”

He had turned his head to discover a pair of green eyes staring at him.

All the other passengers were asleep. She had left her cabin in search of a glass of water and had found this boy, sitting in the semidarkness,

in the small kitchen of the airship. He was peeling potatoes.

She supposed he was working as a kitchen hand.

And then, as she headed for the door to return to her cabin, she had heard him say, “If you like, I’m here. If you can’t sleep, my name’s Vango.”

These peculiar words had stopped Ethel in her tracks. She had repeated them to herself, before wondering, And if I can sleep, will he still be called Vango?

Against her better judgment, she had glanced at him. She saw that he was peeling his potatoes as if they were precious stones, with eight perfect facets. Above all, she saw that he bore no resemblance to anything or anyone she had ever met before. She had walked out of the room. The Zeppelin was already some distance from the coast. Manhattan was just a shiny memory in the sky.

When Ethel returned to the kitchen shortly afterward, Vango had admitted, “Like you, I’ve said very few words in my life. It’s your silence that’s making me so chatty.”

It was her smile that betrayed her. She had sat down on a crate, as if she hadn’t seen him. He was singing something in a language she didn’t recognize.

Vango could no longer recall what he had said to pass the time.

But he hadn’t stopped talking until morning. Perhaps he had begun with the potato he was holding between his fingers. Boiled, sautéed, roasted, grated, stewed: the humble potato always astounded him.

Sometimes, he would even cook it in a ball of clay, which he would smash afterward with a stone, as if it were an egg. From the potato, he would no doubt have gone on to talk about eggs, then chickens, then everything that lives in the farmyard, or that lends its scent to the vegetable garden or the spice shop, or that falls from the fruit trees with the sound of autumn. He had talked about chestnuts exploding, and the sizzle of mushrooms in the frying pan. She was listening. He had got her to smell the jar of vanilla pods, and he had heard the first sound to pass her lips as her face approached the jar to sniff it: like the sigh of a child turning over in her sleep.

They had even looked at each other for a second in silence. She seemed surprised.

Vango had continued. Later, he noticed the small bundle of vanilla pods bringing tears to the girl’s eyes; even the acrid smell of yeast on the chopping board seemed to make memories rise up for her.

He watched her beginning to thaw.

The next day, as they passed the thirty-fifth meridian, Ethel had uttered her first word, “Whale.”

And sure enough, below them was a drifting white island, which not even the pilots of the Zeppelin had spotted. A white island that turned gray when it rose up out of the foam.

After that word came the word “toast,” then the word “Vango,” and then other words too: sounds that filled the eyes and mouth. This lasted for nearly two weeks. Ethel could feel life returning, the way a blind person recovers their sight. Her brother, Paul, sitting at the table with the other guests, had watched her getting better before his eyes. He hadn’t heard the deep timbre of her voice since the death of their parents.

But just before leaving Japan, on the twenty-first of August, she had seen something crack in Vango’s gaze. What had happened that evening of their world tour?

Ethel suddenly remembered that all dreams have to come to an end.

Read our interview with Timothée de Fombelle on the Reading Group Choices blog!