Reading Group Choices talks to Ali Benjamin about her YA novel The Thing About Jellyfish.

While the setting took Reading Group Choices back to middle school memories (some fond, some not so fond), the issues and struggles were ageless. We found much to discuss about grief, individuality, friendship, bullying, and the different actions that can be used in place of words. And Ali Benjamin kindly agreed to answer a few questions for us!

Reading Group Choices: You have a really interesting background as a writer in how varied it is—nonfiction articles, The Keeper, Positive, The Thing About Jellyfish. How did you end up writing such a variety? A lot of writers seem to stay in one genre or if they write articles, they don’t write books and vice versa.

Ali Benjamin: I’ve always followed my interests — I’m not sure if that’s a result of a professional philosophy or simply a chronic inability to make and follow a plan! My nonfiction articles tended to be for academic institutions. The articles weren’t high profile, but they were fascinating. I’d sit down with a leading expert, do a deep dive into their subject, then translate their work for a lay audience. It gave me the chance to roam widely through subjects like the origins of the universe, poetry, hydrofracking, the nature of memory, and life on Mars.

I was drawn to Positive because I felt like Paige’s story revealed important things about bullying, HIV/AIDS, and how institutions earn or break the trust of the people they purport to serve. I was excited by Tim Howard’s story in The Keeper in part because it was a chance to explore how brain differences that might seem to be a disadvantage (he has Tourette Syndrome and OCD) actually have a flip side with tremendous benefits. The Thing About Jellyfish grew from my interest in going deep into a subject, as well.

I’ve never had much attachment to “being a writer,” and I still cringe a little when people ask me what I do. For me, it’s always been about learning something new, following paths that don’t feel trodden. Writing just happens to be a great way to do that. 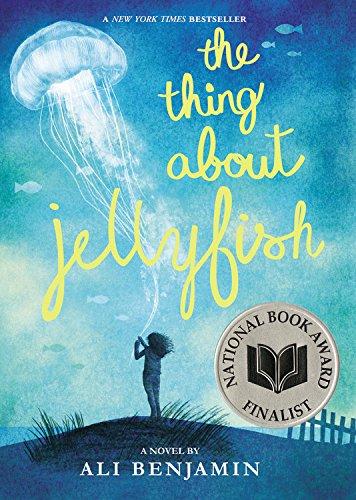 RGC: We read in the notes that you initially wrote about jellyfish for an article that did not get published, but you were really interested in jellyfish and so you kind of got obsessed (maybe like Zu?), but how did you decide to take your obsession into the form of a young adult novel? Or did you not realize you were creating a young adult novel?

AB: Yes, my obsession was quite a bit like Zu’s, actually! When I learned it wasn’t going to be an article after all, I started an adult nonfiction book on the subject. I worked on it for a few months, but something wasn’t right. No matter what I did, my nonfiction approach just couldn’t seem to capture how I felt when I was learning about them. It didn’t capture fully their beauty, or my wonder and fear, or the despair I felt at their environmental warnings. Meanwhile, I’d been thinking about a novel about a girl and her older brother, but I hadn’t yet found the story’s heart. So there I was: I had two different projects that weren’t working — one nonfiction, and the other fiction. It would have been easy to set them both down and walk away. But then one day, it hit me out of the blue: these could be the same story. It was only when I stitched them together that the project started to groove.

RGC: What is your inspiration for the main character? We all love Zu’s brain and how she thinks about things!! We loved the way she analyzed each expert before choosing one.

AB: Oh, I felt like such an alien in middle school. I pretended I didn’t. I was outwardly very social, and I acted like I had it all together. But the whole experience felt sort of murky and overwhelming. So that part — Zu’s sense of alienation in middle school — is 100% me. She’s got elements of my daughters, too: my younger daughter has always been literal like Zu. And it was her interest in sea creatures that started me down my jellyfish obsession. My older daughter, on the other hand, is fiercely independent — she wouldn’t hesitate to fly across the world without telling a soul, if that’s what the situation required. So, I guess you could say that Zu is a combination of the three of us. None of us are quiet or quite that analytical though — the three of us are probably all a little more like Justin!

Zu’s self-imposed silence was inspired by a dinner I’d witnessed many years ago. I was on a long road trip, and I stopped into a Chinese restaurant in a tiny little midwestern town — the sort of place with zero traffic lights. A teenaged boy and his father sat at a nearby table. The father was asking the kid questions, trying to engage him and failing. Mostly, the boy shrugged in response; when he answered at all, it was with one or two words. Each seemed so pained in his own way, and apparently the scene stuck with me; it came flooding back when I was writing.

RGC: 4. The pee discs. We talked about the logistics of the pee discs for a while — a unique topic for book group! Was this something that happened at your school or someone else’s school that you heard about? It just seemed like a very unique way in which to give Franny a sign. We’re intrigued.

AB: Ah, the pee discs! No, I definitely never knew anyone who did this. When I wrote this scene, I’d just finished writing Positive. When Paige was being bullied, her classmates had slipped notes into her locker. So I’d been looking at locker slats, thinking about passing things through them. Meanwhile, I knew I needed Zu to do something terrible, but which also made a certain kind of sense in the context of the story. As I was thinking about this, I went on various forums to read what kids had to say about pranks and bullying. It turns out urine plays a huge role in both. Somehow the two — the locker slats, the pee — came together.

I’m still sort of stunned that a major publisher wanted to include this scene in a book! Honestly, when the first offer from a publisher came in for this book, my first question was, “Did they read it?”

RGC: Franny’s pageboy haircut in the photo at the funeral taken before her last swim. One of us wondered if that haircut — the lack of the swinging long ponytail the popular girls all had (even the ones mentioned sitting in the last pew) — was showing us that Franny had changed.

AB: Wow, that’s such a great insight. In my mind, Zu never having seen the new haircut was confirmation that Zu didn’t really know Franny anymore. Changing hairstyles is such a big deal at that age, so the fact that Zu hadn’t seen it, or known, was a sign that Franny genuinely no longer considered her a friend. I love your interpretation, and now I think that this is probably also true!

RGC: In your bio, why did you choose to name your dog, but not your kids or your husband. Just curious!

AB: That’s so funny — my older daughter asked the same thing! It was actually unconscious. I’m pretty squeamish writing anything that feels self-promotional, so I wrote the bio as fast as I possibly could and didn’t look at it again. But you’ve struck upon something interesting: I feel like people rarely ask me my kids’ names (Merrie and Charlotte), and they almost never ask my husband’s name (Blair). But dog lovers will ask my dog’s name — kids especially!

RGC: Thank you for answering our questions! We really enjoyed the book, and loved the discussion, even the parts that made us remember some of the mean girls and hard friendships from middle school. We loved Aaron and Rocco, and how you introduced them without explanation or labels about their relationship. We also all loved the structure for the sections.

AB: Thank you so much, and thanks especially for the note about Aaron and Rocco. The most consistent negative feedback I’ve gotten about the book tends to be about them. Some adults are angry that a gay couple would show up in a children’s book at all, others believe that a gay relationship should only have been included if it served some plot “purpose.” This pushback comes only from adults — never kids. A few kids have asked me why I included a gay character. I answer simply, “because sometimes people are gay.” That’s the only answer I’ve ever needed for kids. I love kids.