We talk to Allison Amend about her novel inspired by the Galapagos, Enchanted Islands.

Reading Group Choices enjoyed following Frances, the protagonist of the novel by Allison Amend, to Chicago, Nebraska, San Francisco, and of course the Galapagos Islands. And we found it an especially fitting read for the end of the summer. We had an interesting discussion about chance and circumstance, and Allison kindly agreed to answer a few questions for us!

Reading Group Choices: Once you decided you were going to write about Frances Conway, and you knew her story on the islands, how did you choose where to start? Did you have a few beginnings outlined before you chose one?

Allison Amend: You never know where to start! But actually, I did start with them in the nursing home. I was thinking about lifelong friendships, about my grandmother’s nursing home, and about the complicated politics that occupied my grandmother in her final years, and I wanted to set a scene there. I thought that if I could figure out what Frances and Rosalie’s relationship looked like at the end, it might be easier to reveal its origins. It worked!

RGC: You mention that Frances Conway’s book was dedicated to a Rosalie, but how did you come up with your Rosalie? 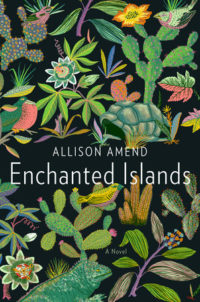 AA: Actually, Frances’ book was dedicated to “Rosaline” and I mistyped her name for a few months while I was drafting the book. When I realized the “error” I kept it because she was my character anyway. We never learn anything about the “real” Rosaline in Frances’s books. At one point the Fischers lend them money, and at another they send them their mail and some seeds, so there was no template to work from.

All characters come from amalgamations of people I know and observe, and people who will be “good” for the character (“good” in the sense of providing conflict and deepening our understanding of the protagonist’s character).

Sometimes, when people ask me where I get my ideas or my characters, I tell them there is a store on the corner of Lexington and 44th street in New York that sells them really cheaply.

RGC: What part of the book did you enjoy writing the most?

AA: I had a blast writing the nursing home scenes. I also really enjoyed Frances and Ainslie’s interactions. I thought I would like the Galapagos scenes more, but I was acutely anxious that Frances had chronicled her time there so convincingly. Also, writing about Equatorial heat during a February in New York took a lot of imagination!

RGC: What was the biggest change you made from your first “final” draft to the published book?

AA: Once I got rid of the alien subplot (kidding…). In the first draft, I spent a lot of time with Frances in Nebraska before she goes to San Francisco (see next answer). Also, in the first draft, fictional Frances followed real Frances’ path to an island called Santiago, but there were too many characters, and too much to-ing and fro-ing. Plus, I wasn’t able to visit the island of Santiago on my research trip, so I simply put them on Floreana for the whole time.

RGC: Our group kept returning to Franny’s time in Nebraska, and how much we enjoyed that short, but important and beautifully described section. We kind of just want you to know that, but if you have anything to share about that section, please do!

AA: I have about 60 pages of further Nebraska adventures. Ultimately, my editor pointed out that the book can be fairly neatly divided into three sections, for the three main relationships: Rosalie and Chicago, Ainslie and Galapagos, and Josef and San Francisco, and the Nebraska part wasn’t really necessary. I agreed that it didn’t do anything that wasn’t being done in other parts of the book, so I cut it. Frances has her first unrequited love and is active in the Suffragette movement.

RGC: How much time, if any, did you spend on the islands?

AA: I first went to the Galapagos as a teenager with my parents and fell in love with the islands (also the cute Ecuadorian guide). I went back for a week in 2015 to do research, and found it utterly changed— so much more populated and urban. I was supposed to spend 5 days on Floreana, but after three I caught island fever and hurried back to the “big city.” It was so hot, there were few other tourists, only 2 roads, and nowhere to buy food. Plus I was very lonely. I really felt empathy for Frances during those days— I got a little taste of what she must have experienced! I’m going back next summer as a lecturer on a New York Times Journeys Cruise and I can’t wait!