During the fall of Saigon in 1975, Phuc Tran’s family evacuates and begins a journey that brings them to the small town of Carlisle, Pennsylvania. It’s here, in this unfamiliar country, that this coming-of-age memoir begins with a child’s question to his parents. What is his name? Not his Vietnamese name, but his English one? What follows is a vivid, humorous, and raw account of coming to the United States as an immigrant and the long journey of finding his place.

The book takes us through Tran’s formative years. From stealing Topps trading cards to publishing an essay in the school paper on racism in his town. From running from the police on skateboards to losing himself in the stacks of a library. He navigates the unforgiving demands of finding friends along with the strict standards imposed by his parents. (The latter come with violent consequences if disobeyed.) 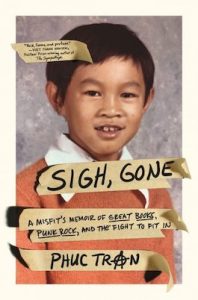 We watch his awareness grow: the awareness of his difference from others, how his parents interact with their adopted homeland, the prejudices carried by neighbors and institutions, and the simple and powerful kindness of strangers.

We follow his quest to fit in, because as he writes, “Vietnamese got me teased. Vietnamese got me into fights. Vietnamese meant non-American.” A quest that means survival for Tran, who takes guidance where he can find it: pop culture, punk music, and books.

Tran’s father insists on his son’s place on the school honor role, sacrifices his training as a lawyer to work in a tire factory in Carlisle, and is prone to violent outbursts. He also introduces Tran to the public library, which will become an essential part of his self-education.

The memoir organizes each chapter around a book that had powerful meaning for Tran. The Metamorphosis, The Importance of Being Ernest, The Iliad, The Autobiography of Malcolm X, and others. The discovery of each book tracks his life and his changing sense of identity, from his relationship to family, desire, assimilation, and racism. Much like the most important books in many readers’ lives, they appear when they’re most needed.

Consider his discovery of The Lifetime Reading Plan by Clifton Fadiman. Discovered by chance for 50 cents in a library basement, the book outlines a classic canon of Western literature. It gives him a guide to the pursuit he loves most (besides punk rock): reading. And places it in a context that he longs for: a manual for this country. It’s one moment among many that will make readers remember their own experience and essential appreciation of books. A reminder as well of how the lessons within still give us guides for how to live and navigate unfamiliar territory.

The Currency of Culture 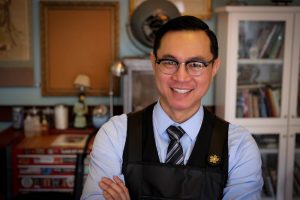 Pop culture saturates Sigh, Gone. Phuc Tran captures the era of the late 70s, 80s, and 90s with books, music, film, and television. Tran moves from searching from Wookie in an English dictionary to learning how to pronounce the name of Camus and other French Existentialists. He swaps mix tapes and music and buys armloads of old flannel shirts to take on a punk identity. Since he’s already different, his initial goal with punk is deliberately looking as different as possible.

Fitting in ultimately comes down to cultural references, which is currency on the streets and in the schools of America. Belonging means sharing favorite Star Wars characters on a neighbor’s playground. That’s how a new culture is transmitted, and where Tran turns to learn more about his new home. The books and music come with a desire to be accepted, to belong. And all end up delivering a more profound result: helping us become not what others want us to be, but who we are.

Discover more and read an excerpt from Sigh, Gone.