Eimear McBride talks about her debut novel A Girl Is a Half-Formed Thing with Reading Group Choices.

Given the lyric prose in the first novel by Eimear McBride, we enjoyed discussion the style as much as the story itself. The book brought up many important and timely issues to discuss: gender, power, trauma, individuality and perception, and caused us to consider how the meaning of of these words/themes change when they are specifically tied to a woman’s story. We were lucky enough to have Eimear answer a few questions for us!

RGC Group: When you began writing the book or had the idea for the book, did you have a specific goal or intent for the content/meaning of the book and for yourself as an author?

Eimear McBride I had no specific ideas about what the book’s themes or content would be. I didn’t even know where it would be set. The only constant in my mind was that I wanted to give the reader a different kind of reading experience. I wanted reading to become almost a physical experience in order that the reader would feel no separation between themselves and what was happening to the lead character. I had never read a book like that and I wasn’t sure what would be involved in achieving it but that was the plan.

RGC: Was any part of the story based on life experiences (yours or others), or was the time period or any of the locations drawn from a certain part of history or real locations? 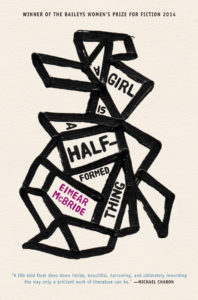 EM: It’s no secret I lost one of my brothers to cancer but A Girl is a Half-formed Thing is a work of fiction and I’ve always been very clear about that. One of the reasons the characters are never named, and locations never explicitly given, is to break down the barriers between the lead character and the reader. I don’t want the reader to be aware of an authorial voice telling them what they should think about what they’re reading and I don’t think trying to pick out details from my life helps with that or really adds anything meaningful to the effect of the book.

EM: No, I didn’t think about that. What was most important to me was trying to write something truthful and, hopefully, meaningful. That can’t be achieved by having a committee meeting in your head, only by being true to where the characters and narrative lead. I have no desire to set my work up as a therapeutic tool. A Girl’s purpose is simply to describe one girl’s experience loss, and abuse, and their consequences throughout her life. Neither grief nor sexual abuse happen in a generalised way. They don’t affect those who live through them in an identical fashion so it would be pointless trying to write about either subject in hopes of achieving a general effect for the reader, whatever the readers own background might be. This is her story alone. Since publication I’ve spoken to a number of readers who personally identified with the girl and when they’ve told me they found it a moving, or cathartic, experience I have been very touched but there was no message I set out to impart.

RGC: Religion is a consistent subject in the book, and many times the relationships to religion are extreme – being extremely devout or being adamantly opposed. Religion definitely has a strong connection to Irish culture and history. Did you intend to include religion when you began writing, or did that come up organically based on the rest of the story and characters? What do you hope book groups consider when they talk about religion throughout the book?

EM: Again, religion wasn’t part of the plan but just a subject which kept rearing its head as the writing progressed. Setting a book in pre-boom Ireland probably made that somewhat inevitable as the Church played such a huge, unchallenged, role in Irish life at that time. I suppose I’d want book groups to think about why women so often support institutions which treat them as though they are of less value than men. Why they imbibe that lesson so deeply they pass it on to their daughters and cannot forgive them when they rebel. I’d like them to consider the human cost of blind allegiance to a cause, any cause. And I’d like them to discuss what role the mother’s inability to see beyond her religious prejudices plays in her daughters excruciating sense of isolation and eventual destruction.

RGC: What goals might you have for book club discussion? What issues do you hope book clubs are aware of and consider after reading the book?

EM: I’d hope after reading A Girl that book groups would think about loneliness, what it is to feel yourself utterly alone in your home and in your life. How one of the legacies of abuse is a sense of being set apart from the world, from a feeling of belonging and normality. I’d like them to think about female sexuality and the often damaging ideas we have about how it should be expressed. I’d like them to ask how differently they would feel about the story if the central character was a boy rather than a girl.

RGC: How has your personal relationship to the book changed from trying to publish it to receiving wonderful reviews and awards to now writing a second book? How do you feel about how the book was received, and what did that mean to you?

EM: Although A Girl was only published in 2013, I wrote it 2003-2004. In 2016 I published my second novel The Lesser Bohemians, which took nine years to write, so A Girl feels almost like something from a different lifetime. Obviously I was delighted when it finally found a publisher and was so well-received. In my wildest dreams I never imagined it would have found such a wide and diverse readership and, after so many years of rejection, it was nice to have it confirmed that I wasn’t the only reader in the world up for a challenge! I suppose I also felt more confident about taking the style I’d developed in A Girl and evolving it in The Lesser Bohemians.

RGC: The writing style is definitely a unique form of prose, and is obviously something that comes up in discussion of this book, and in reviews as well. What do you think about this conversation of style? How do you think the conversation has changed, if it has, since, say, Joyce?

EM: I think, in many ways, after Joyce Modernism was considered over, old-fashioned and unnecessary. I disagreed. I felt that Modernism’s aim to bring the reader closer to the experiences described in the story was as relevant as ever, especially since the rise of the internet; as an increasingly important tool in the battle against the technologisation of our humanity. But it was a conversation that had pretty much died out in contemporary literature which made it hard to get published. Luckily for me times changed and it’s very much on the literary agenda again.
So I’m not interested in playing with language for its own sake. I want to see what it can do and how it can be made to more deeply express the stories I’m telling. We do not experience the moment-to-moment of life in a linear way. We can talk on the phone, eat a sandwich, feel sad about when our mother used to make us that same type of sandwich, pat the dog, worry about our electricity bill and listen to the radio all at exactly the same time, if we want. Why does language pretend we can’t? Grammar is not as sophisticated as the human brain. What happens when you try to make language replicate life as we experience it rather than how we recount it? That’s what I want the language in my work to do. That is the point of the style.

RGC: We talked about the ending for a long time and the idea of redemption. Did you know where the book would end when you began?

EM: I wrote the book exactly as you read it so I didn’t know how it was going to end until about 20 pages before it did. Although it’s not a happy ending in any traditional way, I did want those final pages to feel like a moment of transcendence, of washing away of the past and becoming, in some strange way, complete. She goes towards love rather than in despair.

RGC: Thank you, Eimear, for taking the time to answer our questions! We look forward to seeing what you write next!