The historical novel The Huntress by Kate Quinn tracks the intersecting lives of an English journalist, a Russian bomber pilot, and a Nazi war criminal living a secret life in Boston.

For her interview with Reading Group Choices, Kate Quinn spoke about her research process, women in the military, creating vivid landscapes, and the fascinating true stories that she just had to include in the book.

Reading Group Choices: Which voice was the first to appear?

Kate Quinn: Technically, Jordan’s—my youngest heroine, the teenaged photographer in Boston. But that’s because she is actually the heroine of a much earlier novel of mine which was never published. The novel was ghastly, a thriller that did not thrill in any way whatsoever and was otherwise consigned to the under-the-bed grave of my other unpublishables…but Jordan was a character I loved, and I always thought she deserved a better book. So when I realized she would be right at home in The Huntress, I scooped her from one book and dropped her into the next—and I didn’t need to figure out her voice, because I already knew it very well from writing her old story years before! 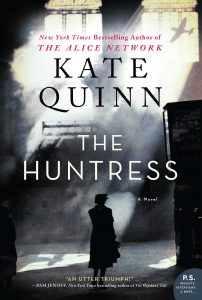 RGC: Can you speak about your interest in people leading dual lives, or creating new lives from turbulent pasts? How do you create sympathy for characters like Anna who have done horrible deeds?

Kate Quinn: I’m fascinated by aftermath—not just what happens during a war, but afterward, when people have to pick up the pieces of their lives. Most of my characters in The Huntress are dealing with fallout from World War II: Ian, the journalist-turned-Nazi-hunter, struggles with PTSD from his war correspondent years; Nina, the former Russian bomber pilot, mourns the loss of all her comrades-in-arms; Tony, the soldier-turned-investigator, struggles with guilt that he had a “safe” war while the Jewish branches of his family died in the Holocaust. And Anna, the Nazi-war-criminal-turned-housewife, is trying to build a new life so no one will ever find out what she did in her old one.

In showing her good side as a loving mother and a supportive friend to Jordan, I wasn’t trying to create sympathy for a villain, but write a more well-rounded—and thus more terrifying–one. What is far more frightening to me isn’t the black-hatted, mustache-twirling murderer who is appalling to everyone they meet, but the person who commits terrible acts of evil and then goes home to their much-loved family and calmly makes dinner. Yet there were many in the Nazi regime who were capable of such compartmentalization, and that’s what I wanted to show in Anna. 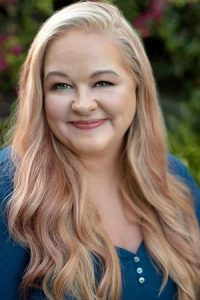 RGC: Much of the novel is based on historic events and people. What was your process for research versus writing? How did you stop yourself from falling down endless rabbit holes when researching? And how did this research process differ from your last book?

Kate Quinn: This book had three timelines rather than two, so triple the research! I do a lot of deep-dive research before I ever put words on paper, getting comfortable in the world I want to write about. After that I continued to read and research as I drafted and edited, going down the rabbit hole for whatever details were needed in the chapter right in front of me. And then the fact-checking goes on and on and on, until the very last minute before I push SEND and get the book off to my editor. The fact that I do, at some point, have to press SEND is probably the only thing that hauls me out of the rabbit hole.

RGC: Of the people you researched and/or interviewed, whom did you connect with the most? Whose story did you find yourself investigating deeper or thinking about more intensely?

Kate Quinn: Nina nearly took over the book in many ways—she isn’t a historic figure, but her Siberian background and war-time experiences among the Night Witches are all drawn from interviews with real pilots. Those women fascinated me, and their exploits took flight in my imagination (sorry for the pun!) even more strongly than the other narrative threads in The Huntress.

RGC: What factual or historical piece most surprised you while writing this book? Was there anything about your own writing and process that surprised you as well?

Kate Quinn: This book was a bear to write, simply because balancing the three very different storylines was tricky, and that definitely gave me headaches. But the history continued to surprise me—every time I thought I was done being surprised by how courageous/selfless/utterly insane the Night Witches could be during their bombing runs, I’d find some new anecdote to make my jaw drop. “Oh yes, sometimes the bombs got stuck on the rack, so your navigator would climb out on the wing mid-flight and give it a push.” Once I’d picked my chin up off the floor, all I could think was “Well, that’s going in the book.”

RGC: From the frozen climes of Siberia to mid-century Boston, what’s the key to creating convincing atmosphere?

Kate Quinn: Contrast and detail. I loved the whiplash of being able to fling the reader from a distant lake in Siberia all the way to a Sunday afternoon baseball game in Fenway Park–contrast in settings makes for a more vivid novel. The key to bringing each very different setting alive was finding small details to make each location ring true, often tiny things gleaned on the edges of research. For Boston it was the detail of ten cent diner coffee and a Fenway Park that didn’t yet have its distinctive Green Monster left-field wall; in the USSR it was the freshwater seals that live in Lake Baikal (and nowhere else in the world) and the distinctive names of the seasonal lake winds. Little things make settings come alive. 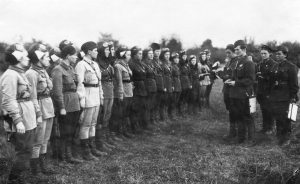 RGC: Water plays such an important role in the story. Did you have a personal connection or interest in water before writing this book? Did you know how important you wanted the idea of water to become and what it would represent?

Kate Quinn: The idea of lakes—and the lake spirit folklore attached to them—became a way I could draw connections between characters who, at the beginning of The Huntress, are still vastly separated by distance and time. Ian, Jordan, Nina, and the Huntress are not connected at the novel’s beginning, but they all begin their story standing on very different lake shores…and by the end, they are all standing on the same lake shore.

RGC: Did you see a connection between how the Night Witches were treated by men during WWII and how women in the military are still treated today? Was the similarity or difference something you considered while you were writing?

Kate Quinn: As a Navy wife, I have become friends with a good many military women, who will probably tell you they have it better than the Night Witches did—if simply because they didn’t need a war to be able to sign up and serve their country. Modern military women are still frustrated by ingrained sexism—they’ve heard their share of little princess jokes, like the Night Witches, because although the 21st century military has made great inroads in trying to address such problems, monolithic systems change slowly. Still, at its best the military is the ultimate meritocracy: the person who can get the job done best is the one everyone wants to work with, whether male or female.

RGC: Do you find that you often think of your characters as outsiders or insiders? Did you know in advance which groups your characters in The Huntress would fall into? Or did any surprise you?

Kate Quinn: That’s a good question, and not one I think I put much thought into in advance. Nina starts out an outsider, thanks to her incredibly isolated childhood in one of the wildest, most isolated parts of the USSR, but she finds a sisterhood of women like herself when she joins the all-female regiment of bomber pilots. Losing them when she leaves the Soviet Union, she becomes an outsider again—her journey, in many ways, is about finding a new team and family who will make her one of them.

Jordan is also an outsider in some ways, although she is surrounded by family and friends: she has ambitions that stretch further than her limited upbringing, and without realizing it, she is lonely for people who will understand why she wants more than the role of wife and mother that her family expects her to fulfill. Ian is the perpetual outsider, since as a journalist and then an investigator he is perpetually standing on the sidelines observing others. I suppose I’m fascinated more by outsiders than by insiders!

Read more about The Huntress, and find other great author interviews on the Reading Group Choices blog!